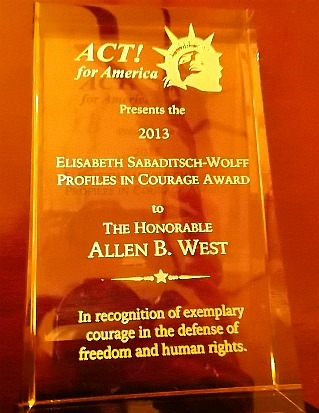 On Thursday night Elisabeth Sabaditsch-Wolff appeared at the annual ACT! For America gala banquet at the Omni Shoreham Hotel in Washington D.C. Her function at the occasion was to present the first annual “Elisabeth Sabaditsch-Wolff Profiles in Courage Award” to Lt. Col. Allen West. After Col. West received his award, he told the audience that he didn’t deserve it. He presented it in turn to a young woman named Julie, a Pakistani Christian who had acid thrown all over her body by Muslims. She is now an American living in Texas, and is studying to be an accountant. She had spoken previously at the event.

This moving moment was caught on video. The sound in the clip below is somewhat unclear at the beginning, but settles down after Col. West begins speaking into the microphone. Many thanks to Vlad Tepes for processing and uploading this video: