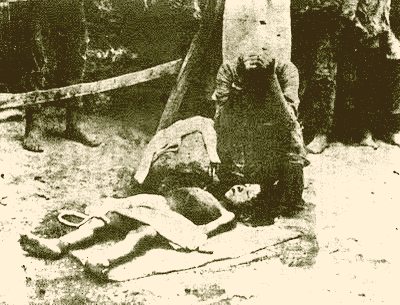 As we approach the centenary of the Armenian Genocide — the major portion of which began in 1915, during the Great War — the history of those awful events is being largely ignored by the media and Western public officials. The facts of the Ottoman atrocities are not hidden, but neither are they publicly recalled in any meaningful fashion. There is no indication that there will be any significant official commemoration outside of Armenian circles of what happened in Anatolia and Syria a hundred years ago.

The following text was translated by JLH from German-language material at the Armenia portal. The translator includes this introduction:

These translated pieces are the longest of a number of statements on a commemorative site, which also includes this quote from Theodore Roosevelt in a letter in 1918:

“…the Armenian massacre was the greatest crime of the war, and the failure to act against Turkey is to condone it… the failure to deal radically with the Turkish horror means that all talk of guaranteeing the future peace of the world is mischievous nonsense…”

Unless I missed it, there has been very little commemoration anywhere of this anniversary. The Germans — while they were not financially punished as they had been after WWI — were not allowed to simply forget what had happened in the Holocaust. However imperfect and corrupt, there were efforts — at least in the Federal Republic — to cleanse society of the worst remnants. And for every German who beat his breast in repentance, there was probably another who thought resurgent Nazi thoughts. But the folk in between those extremes had to find a way of fitting into the morality of the post-war West, as it was.

The Turks have had no such experience and now are capable of throwing a tantrum worthy of Hillary testifying on Benghazi, just to make us shut up. And the PC press, already manufacturing excuses for the butchers of Boston, is not interested an any further indictments of their Islamist pets.

We cannot afford to be shut up. This atrocity is a touchstone of twentieth century evil. And it lives on in the twenty-first.

“Who today still talks about the annihilation of the Armenians?” asked Hitler on August 22, 1939, as he announced before high military officers and commanders of the SS death squadrons that the coming war signified the merciless annihilation of the enemy — man, woman and child. The first European genocide, of 1915-1916, had been perpetrated on the Armenians by the Turks beginning exactly 24 years before. Is it a forgotten and denied genocide even today? A cooperative seminar of the Memorial House of the Wannsee Conference with the Bochum Institute for Diaspora and Genocide Research confronted the structural questions of this genocide on April 24th of this year [probably 2007]. 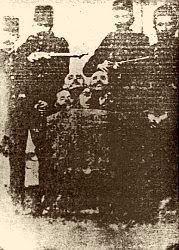 The date was not chosen at random — it is the Armenian memorial day. On April 24, 1915, the Young Turk regime which had come to power in 1908 initiated the arrest, deportation and murder of Armenian intellectuals in Constantinople and therewith set in motion the murder of 1.5 million Armenians — two-thirds of those Christian folk who had been living in the Ottoman Empire for centuries.

Deir-es-Zor, the death camp in the desert, has the same awful resonance for Armenians that Auschwitz holds for the Jews. “There are many parallels between the genocide perpetrated on the Jews and the one perpetrated on the Armenians. Both mass murders occurred during a war. The Young Turks, too, had an ethnic, racial concept of nation and dreamed of Turan — a mega-empire stretching from Thrace to Central Asia,” explains Dr. Mihran Dabag, the director of the Bochum Institute, whose founding joined Germany to the international comparative study of genocide.

Even in 1993, the British Islamic scholar Bernard Lewis,* in an interview with Le Monde, maintained that the planned annihilation of the Armenians is not proven. And yet this genocide is massively documented in the political archives of the German foreign office. Author Ralph Giordano notes, “Hundreds of detailed reports about the systematic atrocities were sent to Berlin by German officials and military personnel from Turkey, which was Germany’s ally in the First World War. And yet Turkey still denies these acts and Germany is silent.”

From the Berliner Zeitung in 1998:

At that time, Armenia encompassed an area twenty times as large as its area today. It reached from the Caspian Sea to the Mediterranean, from the Black Sea to deep in Iraq. The Roman historian Tacitus calls the Armenians “ambigu gens,” an ambivalent people, but was that a fault?

Armenia was located precisely on the cut-off point between East and West, and took what it needed from both. Its culture was Iranian with Hellenistic elements. Its kings were of Parthian ancestry and received their crown from the hands of the Roman emperor.

For far longer than a thousand years, Armenia was divided and contested by Byzantines, Turks, Arabs, Persians and finally Russians. The First World War brought the catastrophe. Most of the Armenians still in the country were living under Turkish domination, regarded as undependable foreigners. The first great, systematic genocide of this century began in 1915. As always in such things, the beginning was disguised as a resettlement. The Armenians only discovered on their death march that they were being taken to the Syrian desert — the middle of nowhere.

Photos from this time show rows of crosses and Armenian women nailed to them, like a kaleidoscopically multiplied Golgotha. The pictures were taken as “souvenirs” by German officers, who were in the Turkish army in great numbers at that time. They were following the strict orders from Berlin not to interfere in internal Turkish affairs.

* Whose slide to the dark side is documented by Andrew Bostom in Sharia Versus Freedom.

13 thoughts on ““Who Today Remembers the Annihilation of the Armenians?””