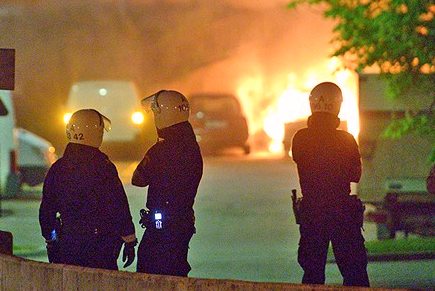 Our Norwegian correspondent The Observer has translated an article from NRK about the formation of “extreme right-wing” vigilante groups in Stockholm. The translator includes this brief note:

I don’t know whether we’re talking about neo-Nazis here, or fed-up citizens who are tired of the police not doing their job. The info in the article is taken from Swedish MSM news sites, so it could quite possibly be just ordinary citizens.

Notice that most of the arrests on Friday night were of ‘right-wing extremists’. Apparently the police had no qualms about arresting the vigilantes, but they seem incapable of stopping the stone-throwing ‘youths’. Go figure.

For the time being the Swedish intifada is continuing.

In fact, from a cynical point of view (and I tend to be a cynic), the violent culture-enrichers serve as enforcers of the existing order.

Right-wing extremist groups patrolled in several of the suburbs in Stockholm on Friday night. Meanwhile the riots spread to Örebro and Linköping.

Approximately 200 black-clad right-wing extremists in approximately 30 cars drove around in the suburbs of Stockholm ostensibly looking for immigrant youths and intending to stop the car fires.

In Tumba, south of Stockholm, they chased people in the streets until the police intervened and stopped them, according to SVT.

After leaving Tumba, and going to Mälaröjden via Älvsjö,18 right-wing extremists were arrested and taken away in police buses.

There are also reports coming from other suburbs about right-wing extremists forming vigilante groups, something which the police have long feared would happen, writes Expressen.

The riots in the Stockholm’s suburbs, spread to Örebro on Friday night.

According to the police the unrest first broke out in Vivalla, a suburb north of the Örebro town centre. At 2100 on Friday night a group of masked youths were on their way to the suburb.

“We chased them away, but they reappeared with flash-bangs,” says Nylén.

Shortly afterwards several cars were ablaze and the police station in Vivalla was vandalized. A grass fire was also deliberately lit, and it started burning at a school.

Youths also smashed the windows of a police patrol car and one police officer was showered in shards of glass. This officer was taken to the hospital with glass splinters in his eyes.

“We’ve wondered whether the events in Stockholm would spread to this area, and that’s now what has happened,” says Nylén.

“We are trying to prevent them from setting fires to schools and residential properties. Cars are by comparison much less important,” says Nylén.

Police also had to acknowledge that the riots in Stockholm spread to Linköping, and there were a number of reports of fires and several incidents of violence during the night.

In the suburbs of Stockholm the riots continued for the sixth night in a row, with car fires in Tensta, Norsborg, Jordbro and Årsta.

Firefighters responded to approximately 40 fires and on Saturday morning the police could report of a total of 23 arrests. Most of them were right-wing extremists who had been arrested at Mälaröjden.

The majority of the youths detained in the Stockholm area earlier this week have criminal records, writes Aftonbladet.

The paper has looked into the background of 16 of those arrested and found that 13 have prior convictions or are described as known individuals by the police. This does not surprise the criminologist Jerzy Sarnecki.

“Those who actively participate in the riots have definitely engaged in various forms of violence and criminal activities in the past,” he says.

“However, this does not mean that there may not also be legitimate reasons for the dissatisfaction in these areas. But if the discontent is manifested by the burning of cars, then these is definitely not ‘God’s best children’ [Norwegian saying — unsavory characters] who are engaging in it,” says Samecki.

Police are also investigating whether there are many of what the police themselves refer to as “riots tourists” among the rioters. Out of the seven who were arrested at the police station in Älvsjö last night, no one came from the area. One of the individuals arrested was from Denmark, according to SVT.

Spokesman Lars Byström says that the police are now looking into the matter.

22 thoughts on “Vigilante Groups and “Riot Tourists” in Sweden”