Woroni, a student newspaper at Australian National University in Canberra, was compelled to yank a cartoon satirizing Islam from its latest edition. The paper had presented a series of cartoons mocking various religions, but only the one poking fun at the Religion of Peace had to be censored.

The logic for singling out the Islamotoon deserves special scrutiny. But first, let’s have a look at the monstrous, racist, deeply offensive cartoon that caused all the brouhaha. It was removed from the paper and taken down from the web, but as usual, someone managed to take a photo of the image in the print edition and distribute it as samizdat around the Internet: 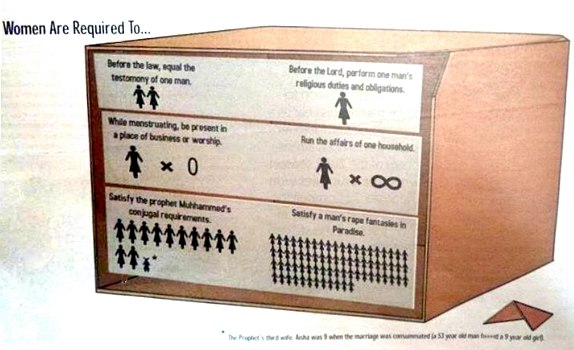 As near as I can determine, this is the text in the picture:

Women are required to:

[Footnote] * The Prophet’s third wife Aisha was 9 when the marriage was consummated (a 53 year old man f***ed a 9 year old girl).

The following clip shows a news report on the incident from Australian TV:

Below are excerpts from the ABC story on the Woroni’s Islamotoon:

The student newspaper Woroni originally published the cartoon as part of its ‘Advice from Religion’ infographic.

It was part of a series previously featuring Mormonism, Catholicism, Scientology, and Judaism.

The university has forced the editors to retract the piece online and issue a formal apology.

“They felt it was both offensive and discriminatory,” he said.

Professor Young says he was also concerned the satire could have provoked a violent response.

“There have been a number of cases internationally of satirical cartoons about the Koran which can have some very unfortunate side effects,” he said.

Editors from the Woroni say they feel the university had ulterior motives for banning the cartoon.

Editor Gus McCubbing says the cartoon was part of a series poking fun at different religions.

“I guess every edition given we’re a student publication we choose a line between satire and bad taste.

“The problem I had here was never before had the Chancelry taken such an active role in disciplining us and saying what we can and can’t publish.”

In an article on the Woroni website, the editors stress the cartoon was intended to be satirical and raise concerns about how the incident will impact on freedom of speech

Professor Young says he is not concerned by the comments, and denies the censorship is an attack on freedom of speech.

He says the paper has published satirical pieces on other major religions without censure.

But he says those pieces did not attract formal complaints.

“They published a cartoon which was part of a satirical set of cartoons about religion but this one we felt overstepped the mark,” he said. [emphasis added]

The coup de grâce was administered by an organization ostensibly charged with guarding the civil liberties of all Australians:

The head of Civil Liberties Australia Tim Vine says the ANU may have been justified in censoring the newspaper.

Mr Vine says the ANU has a responsibility to ensure all of its students are supported.

“If it is defamatory, if it inspires hatred against a segment of the university community, Muslim students for example, or if it is racially vilifying a particular group then the university has a justification to intervene in this circumstance,” he said.

Well, that seems to be it for Woroni, Australian National University, and all law-abiding Australians. Full sharia compliance is now being enforced in Australia. Decent citizens may sleep safely and peacefully in their beds.

12 thoughts on “Sharia Comes to Canberra”