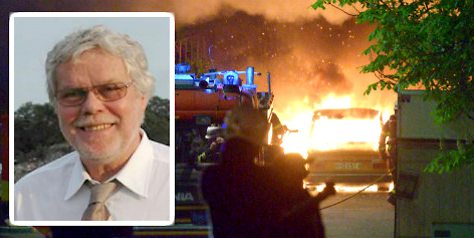 Moderaterna (The Moderates) represent what passes for “conservative” in Swedish politics, and are the party of Prime Minister Fredrik Reinfeldt. The party leadership recently came down like a ton of bricks on a party member named Olle Engström, who dared to raise the issue of mass immigration in public using less than glowing terms.

Our Norwegian correspondent The Observer translated an article published today at Rights.no about the “The Engström Case”:

Out of whack
by Hege Storhaug

Things turned out exactly as expected: The politician Olle Engström, who represents Moderaterna (The Moderates), was removed from all political duties in the party in Borås after he wrote a frank op-ed in the local newspaper about the consequences of immigration to the motherland. There is hardly any country in Europe that is worse off than Sweden. The enormous problems caused by immigration are simply not to be discussed. What exactly do the people think of the “decision” made by the elites?

It took less than 24 hours from the time Olle Engström’s op-ed was published until the local branch of Moderaterna in Borås got together and decided that Engström had to be removed from all official political duties.

I’m not surprised, on the contrary. If he had been allowed to continue, the logical consequence would have been that his thoughts on the “uncontrolled immigration” had to be treated as factual and debated, and that is something that the Swedish political, journalistic and academic elites can’t afford. If they did that all their illusions would be exposed and shattered.

I did a quick search in the comments section of Engström’s op-ed, and what did I find? The most popular comment is this one:

The official immigration policy has been a complete failure. Our reward for having taken in 100,000s of peoples are arson, car fires, housing shortages and a general erosion of the Swedish welfare system, soon not even worthy of the name. The day that the Swedish people receive an objective picture of the costs involved, and what it has cost us up until now on both a national and local level, then maybe they will start to reconsider.

There will be a shock-like hike in local taxes in the future due to a rapid increase in welfare payouts. A 65-year-old elderly immigrant receives SEK 13,737 net per month without having to pay a dime in taxes, according to official figures. One is left wondering what our Senior Citizen Organizations are doing about it and what they are willing to accept.

One should be grateful towards our Swedish youths who are behaving in a collective manner. They should of course be frustrated in so many different ways. There are no longer any available housing or free driver’s licenses for them etc. It has almost reached a boiling point for many of us taxpayers. HOW IS THIS GOING TO END? ?

There are 445,000 unemployed people in this country, but we still receive approximately 1,000 migrants a week. Yes of course we are going to help war refugees as long as they are in need of our protection. I fail to see how this multicultural equation is going to be solved. Many Swedish youths are in a worse economic situation than the immigrant youths.

The second most popular comment is in the same category:

Finally! And thank you Olle Engström for your comments. I feel exactly the same way. Just like Olle writes in his op-ed, we have to stop this; we cannot let this uncontrolled immigration continue. This mass migration has to stop. Just look at who are throwing stones at the police, setting fire to schools and cars and threatening people in their local communities. This is the last straw.

Engström’s op-ed has created a record number of comments, according to the newspaper.

What does the MSM think about that?

The scary thing about “The Engström Case” is when one ponders the reactions and confrontations that the Swedish elites are actively facilitating for the future with their policies. It is almost as if one would rather not have to think about it … But that was exactly what Engström did yesterday. He even went so far as to say that he fears that civil war like conditions could break out in the future.

Earlier today he said that he does not regret writing the op-ed, on the contrary.

“I’m not going to act like a poodle or backtrack on anything. I wanted to bring attention to this issue — all good forces have to be mustered in order to put a stop to it,” he says, referring to the riots in Husby which eventually spread to other cities in Sweden.

“It is not racist to highlight social problems.”

But Engström obviously felt the need to pull out the defense card, and step on others in order to try and keep his head above the water in the smelly Swedish duck pond:

“I hate the Sweden Democrats, and I wouldn’t want to be associated with their policies. I’m still loyal to the policies of Moderaterna, but I felt that it was my duty to write about this issue. The events of the past week have been alarming.”

The political hypocrisy was exposed several years ago: representatives from Moderaterna said completely different things about immigration when they thought that the camera was turned off.

Check out these two video clips that Christian Skaug has posted on Document.no. It doesn’t get more pitiful than this.

See the original article for the videos. We’re hoping for subtitled versions at some point. Stay tuned.

5 thoughts on “Out of Whack”