Paul Weston uses the latest news about prison jihad in Yorkshire to illustrate the treasonous behavior of the globalist elites who have rammed Multiculturalism down the throats of Britons. 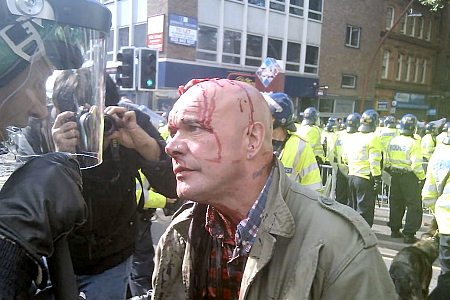 An Example of Left-Liberal Treason
by Paul Weston

There is a great deal of difference between times of peace and times of war. This may seem a very obvious statement, but I’m not sure left-liberals really understand the simplicity behind it.

We are clearly not living in a time of peace in Britain, but nor are we living in a time of war if war is judged in world-war historical terms. Perhaps it is best to say we are in a “sort of war” or a “low-level war” that, although hardly warranting the description “fully-fledged”, cannot be written off as unimportant and of no concern.

Britain’s security services have stopped Muslim terrorist atrocities like 7/7 each and every year since the last lot of Muslim jihadists slipped through the net and murdered and maimed people on our transport systems. Muslims routinely try to replicate this attack because Muslims consider themselves at war with us — be it as a claimed retaliation for our involvement in Iraq/Afghanistan, or simply because Britain is Koranically designated as part of the House of War not ruled by Muslims — as is their supremacist and divine right.

A similar low-level war has been waged against young indigenous girls in Britain, who have been chosen because they are the non-Muslim enemy and therefore deemed a permissible target of rape-jihad, which again is Koranically ordained. This monstrous evil has been going on for well over a decade, but has been deliberately covered up by the government, the police, the media and the social services.

But even citing community cohesion is disingenuous. If the left-liberal elites were truly concerned about cohesion, they would cover up all aspects of the failed ideology of multiculturalism, such as “right-wing” attacks on mosques, and not simply aspects where the consequences of Muslim barbarity reflect badly upon the Muslim perpetrators.

This explains why the BBC filled their studios with Muslim apologists after the 9/11 and 7/7 bombings, and also explains why the Times journalist Andrew Norfolk delayed breaking the news about Muslim gang-rapists on the grounds it would play into the hands of “far-right” groups who are clearly the enemy in the eyes of left-liberals.

Islam clearly considers itself at physical war with us, yet left-liberals consider themselves involved in an ideological war not with illiberal Islam, but with groups they label as far-right. This is a truly evil label when such people are in reality just normal, decent, liberal men and women whose only crime is to be indigenous white Christians who are understandably a tad miffed about their women being raped, their soldiers decapitated and their country and culture wrested from them by barbarian mono-culturalist Muslims.

So, we must admit we are in a low-level war, a clash of competing civilisations which, barely contained today, has the capacity to become an all-out civil war in the future as the internal enemy’s numbers grow. It is interesting therefore to take a look at who is on which side, and who has decided the racial/religious designation of the true enemy.

One side consists of Islam (not radical Islam, just Islam) and their left-liberal allies, the other side of indigenous Brits who would rather the country remained culturally, racially and religiously similar to the Britain they were born into, namely the Britain of their parents and grandparent’s generation.

Is it too provocative to suggest left-liberals have taken the Muslim side in this low-level war? I don’t think so. We have all seen and heard their reactions to the murder of Fusilier Lee Rigby, which was to essentially whitewash Islam and concentrate instead on defaming “right-wing” organisations such as the EDL and anybody else who had the temerity to associate Koran-quoting Islamic murderers with the political/religious/supremacist ideology of Islam.

We must not inflame and polarise opinion when it could result in “Islamophobia”, they tell us, yet they are more than happy to inflame and polarise EDLophobia it would seem, which is odd when the EDL exist purely as a reaction to Muslim violence. This perverse left-liberal alliance with Islam is particularly noticeable with regard to the BBC and The Guardian which both had the following to say about a particular event which occurred on Sunday last week.

Two prison officers have been taken hostage and attacked by three inmates at a maximum-security jail near York. The incident on Sunday at Full Sutton Prison in East Yorkshire lasted for four hours. A Prison Service spokeswoman said the staff received treatment for their injuries, which were not thought to be life-threatening.

The Prison Officer’s Association (POA) said it was aware of the “hostage incident”. Police are investigating. The POA told the BBC it was sending a national representative to the prison to determine exactly what happened. Steve Gillan, the POA’s general secretary, said: “Until the full facts of the incident are known we do not wish to comment further for fear of compromising any police investigation.

“We can confirm that officers sustained injuries and had it not been for the professionalism of prison officers dealing with this violent incident the outcome could have been worse.” The Prison Service spokeswoman said the incident started at 16:25 BST and ended at 20:40 “after staff intervened”. She would not confirm reports that one of the warders was held.

The spokeswoman said on Tuesday that two officers were receiving treatment. She refused to comment further, saying the police were investigating. The Prison Officers Association said it was aware an officer had been held hostage and injured but it was still trying to ascertain the facts of the incident.

These stories, although relating to an incident two days ago, were taken from the front pages of their websites on Tuesday morning. Both left-leaning “news” organisations have had plenty of time to glean further information, but for such basic journalistic professionalism we have to turn to The Daily Mail, a newspaper routinely sneered at by left-liberals as being right-wing and not worth the paper it is printed on.

Three jailed Islamic extremists stabbed a warder and beat him for four hours after the prison imam called on them to pray for murdered soldier Lee Rigby, it was reported last night. The trio snatched the warder from E-wing at Full Sutton prison, near York, and held him hostage before stabbing him during a stand-off with guards.

The terrified victim, who is in his 30s, was locked in a cleaning room where he was also apparently beaten with mop handles and told he was going to die. The prison’s National Tactical Response Group were called and eventually managed to free him and he was taken to hospital with serious injuries.

A prison source told the Daily Mirror: ‘The fear was that the gang had somehow got hold of knives from the prison kitchen and they would attempt to behead him. ‘By the time the attack finished the officer was covered in bruises and blood. He feels very lucky to be alive. He was told they would kill him.’

The three prisoners were thought to have become enraged following a prison imam’s call for Muslim inmates to pray for soldier Lee Rigby, who was stabbed to death by extremists last week. Two of the attackers are believed to be an African-born fanatic and British man who converted to Islam while in prison.

Full Sutton Prison houses dozens of extremist prisoners and there has been recent concern about the spread of radical Islam behind its walls.

Why would the BBC and The Guardian not cover this story properly? The simple answer is that they have chosen to take sides in a war, regardless of whether the war is fully fledged or low-level, and the side they have taken is not the side that represents the interests of Great Britain or its people.

Or, put more simply, left-liberals have committed treason and continue to commit treason on an ongoing basis. They are not held to account because the government and the police are also committing treason, and the head of the government is David Cameron, a man who describes himself as a Conservative but who is, in reality, just another left-liberal traitor.

35 thoughts on “An Example of Left-Liberal Treason”