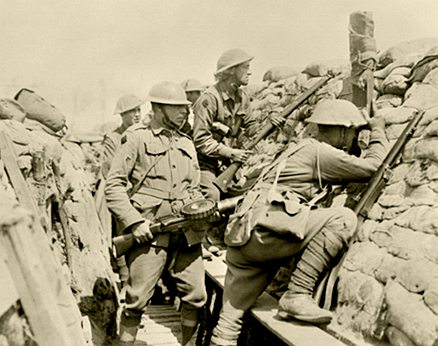 The theme of this Fundraising Week is “putting our heads over the parapet”. That is, we’re looking at the inherent risks associated with being a Counterjihad writer or activist.

Needless to say, opponents of Islamization are not the only ones to face such risks. Anti-abortion activists, “race realists”, those in favor of drastic limits on immigration, skeptics who doubt the ability of the United States to conduct successful “nation-building” in the Third World — any of these positions can put a target on the forehead and cause career difficulties for academics, journalists, and government employees. Opposing Islam invites the attention of the death-to-infidels crowd as well as the opprobrium of the entrenched Left, so it may be the most risky of occupations. Yet we are hardly alone.

The decision whether to blog anonymously is a crucial one. If you put your real name out there, you may face an unbelievable level of hostile scrutiny as a result. If you have a job, and your employer learns of your opinions, you may soon find yourself looking for work. If you are an untenured academic, tenure may forever elude your grasp. And if you work for the government or a large corporation, you may be subjected to mandatory re-education diversity training, even if you are lucky enough to retain your position.

So it’s no wonder that so many Counterjihad writers and bloggers use pseudonyms. That’s how I started out, mostly to make it less likely that my (liberal) employer would learn of my moonlighting as an Islamophobe. I stayed with that protocol for a couple years after being laid off, having seen the frightening things that happened to prominent writers who dared to stand up to the Islamic behemoth.

I decided to go fully public several years ago when I started writing for Big Peace (whilst retaining the pickelhaube here, since this is the persona with which I have been “branded”). Writing under my real name seemed a natural move by then — I was too old to expect to find another full-time programming job, and had no reputation to ruin. Furthermore, you gain more credibility and respect by using your real name, even in a field as widely loathed as this one.

If I had it to do over again, I’d probably have dropped the pseudonym sooner, right after being laid off. However, I wouldn’t advise everyone to do the same thing; it depends on your circumstances. People who have young children or live in culturally enriched neighborhoods take much larger risks than I do. Those who are young enough to have career prospects may not wish to destroy them utterly.

And, most important of all, writing the sort of thing you read here is actually illegal in many Western countries today. Just ask Lars Hedegaard, or Elisabeth Sabaditsch-Wolff, or Stéphane Charbonnier. Unless you are wealthy enough to afford high-powered lawyers, writing the truth about Islam can be a serious legal risk in many parts of what used to be called the “Free World”.

There are several considerations to ponder when the virtual cry of “Who goes there?” rings out ahead of you:

And the most important question:

As more and more people answer that last question in the negative, the Western resistance to Islamization will become truly formidable.

Thanks to all of you for your kindness. Our thank-you notes are going out fairly rapidly this time, although we still have quite a few left to do.

5 thoughts on “Who Goes There?”