The following newspaper article by Fjordman has been translated from the Norwegian, and includes an introduction (in English) by the author.

This essay was originally published online by the Oslo-based Aftenposten, Norway’s largest-circulation newspaper, on April 25, 2013.

The paper had come very, very close to libel-suit territory a few days earlier, when they published a big photo of me on the front page of the print edition, claiming that I am being funded by “right-wing extremists” in the USA. This was a reference to the fact that I had received a grant via the think tank The Middle East Forum, which I had stated quite publicly at Gates of Vienna.

I also told the newspaper openly when asked about this that I had received help with my legal bills (and only that) from the Middle East Forum’s Legal Project in relation to the Breivik case, following a kind offer from Daniel Pipes and competent aid from Ann Snyder and Sam Nunberg. All of this was already public and not a secret.

So Norway’s largest newspaper labeled the Middle East Forum as “right-wing extremists” on their front page. They quickly published an apology afterwards, however, possibly fearing a lawsuit from the MEF — and rightly so.

The same newspaper also published several long and negative articles in reference to a Norwegian biography of me that was published in April 2013 by the author Simen Sætre. One of my most notorious (and dishonest) critics, the professional Breivik-opportunist Øyvind Strømmen, published a “review” of this book in Aftenposten that was essentially one long hit piece against my person. After all of this, within a few days, I sent an email to Aftenposten’s political editor Harald Stanghelle, their debate editor Knut Olav Åmås as well as editor-in-chief Hilde Haugsgjerd and quite simply demanded that I be allowed to publish a full-length essay in their newspaper in response to this smear campaign.

The result is the essay below. 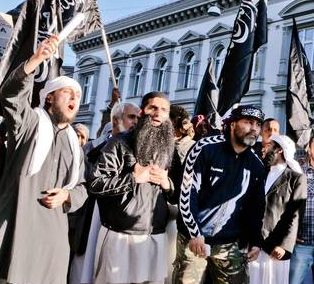 The media myths
by Fjordman

Translated by The Observer

In the last few days, dozens of articles about how irrelevant people like me supposedly are have been published in the newspapers. Those who work in the Norwegian mass media apparently lack a sense of irony.

In his review of Simen Sætre’s uneven biography about me, the writer Øyvind Strømmen describes my views on Islam as “strange,” despite the fact that opinion polls in many European countries show that large parts of the population are deeply skeptical of Islam. In France, more than 70 percent of those surveyed expressed doubts about Islam’s ability to adapt to their society. Similar figures may be found in the UK, Germany and the Netherlands.

There is so little substance to be found in Strømmen’s text that it is strange that he managed to get it published in Aftenposten at all. The only trick he has up his sleeve is to label certain individuals “fascists”. The fact that this is sufficient to secure him a nice career as a social commentator with virtually free access to the press says a lot about the social climate in Norway today.

It is also worth mentioning that the media have recently written about an ethnic Norwegian convert to Islam who sympathizes with the Jihadists of al-Qaida, and who may himself have undergone terrorist training in Yemen. Up until recently he was standing as a member of Miljøpartiet De Grønne (the Green Party of Norway). This is the same political party that Mr. Strømmen, Professor Thomas Hylland Eriksen, and Shoaib Sultan of the Islamic Council of Norway — now of the Anti-Racist Centre — represent. The terrorist might be a lone wolf, but he comes from Øyvind Strømmen’s flock.

On April 17, 2013, Aftenposten by a “mistake” published a large photo of me at the top of the front page of the paper edition, claiming that I am being paid by “right-wing extremists” in the USA. With such war headlines, one might be tempted to think that I’m sitting deep inside a bunker, brooding over plans to invade Poland almost single-handedly by beating my opponents over the head with Islamophobic texts until they surrender. The truth, however, is that I had simply received a grant from a conservative think tank that was so secretive that I had publicly announced this myself on an earlier occasion.

Fortunately, Aftenposten quickly apologized for this “mistake,” which had allegedly happened by accident. Personally, I’m a somewhat unsure as to how such mistakes occur. Maybe someone tripped over a pencil and spilled coffee on a computer, making the computer accidentally publish a large photo of a particular person on the front page, right next to the words “right-wing extremist.” And by yet another sheer mistake, someone sent this front page off to stores across the country. The irony here is that the very same newspaper has previously criticized independent Internet sites for publishing claims they cannot document.

A journalist from Aftenposten then proceeded to question whether I am a dangerous “public enemy.” This not very objective or neutral question was clearly intended to make the readers reach a highly negative conclusion. The newspaper’s article about me was perhaps not quite a “Wanted, Dead or Alive” poster from the Wild West, but it wasn’t very far from that, either.

As usual, hardly any attempts were made to delve into the substance of my arguments, nor examine the major problems associated with Islamization and mass immigration that I write about.

The suggestion that those who are critical of Islam are “right-wing extremists” corresponds well with what Hilde Haugsgjerd, the editor-in-chief of Aftenposten, said in her testimony regarding alleged press censorship during the trial of Anders Behring Breivik. In her testimony Haugsgjerd went a long way towards in suggesting a link between Islam-critical attitudes and the “far Right.”

This is not correct. One of Europe’s best-known critics on issues related to Muslim immigration, Thilo Sarrazin, is a member of Germany’s SPD, the Social Democratic German equivalent of the Norwegian Labour Party.

Personally, I have great doubts as to whether Islam can be reformed. The Christian (Protestant) Reformation lasted many generations and was at times a rather bloody affair. If Islam cannot be reformed, this will cause serious and long-lasting conflicts in European cities. If, however, Islam against all odds can be reformed, then this will probably also create serious and long-lasting conflicts in Western cities since we are now importing Islamic culture here. In Norway, the hardline organization the Prophet’s Ummah has praised the Jihadist terrorists from Boston.

Even non-Muslim immigration can pose a problem with the millions of migrants we’re seeing at the moment, which is gradually turning the native populations in much of Europe into a minority in their own countries. Yet despite this, we continue with the mass importation of possible future conflicts, at the same time as we are discussing what the weather could be like in the year 2089. This is absurd. Just as in H.C. Andersen’s famous fairy tale, someone will have to point out the obvious truth: That the emperor isn’t wearing any clothes.

The independent website Document.no took screenshots of the readers’ comments on a newspaper article that was highly critical of me. To the embarrassment of Aftenposten’s management, a significant proportion of their own readers either partly agreed with me or at least thought that the smear campaign against me was going too far. And just as has happened in other similar incidents, these readers’ comments were then soon removed by the newspaper.

Many of Aftenposten’s own readers are obviously not entirely positively disposed towards Islamization and mass immigration, despite the newspaper’s many attempts to label opposition to such ideas as “right-wing extremism.” There are limits on how far a commercial enterprise can harass its own readers. Some of them might otherwise be tempted to cancel their subscriptions.

This is not really about stigmatizing a particular person, but rather about stigmatizing certain opinions which the ruling elites don’t like. You then make an example out of certain individuals in order to intimidate others into silence. In this particular case, the strategy doesn’t work as well as intended because the target — in this case me — has no intentions whatsoever of succumbing to media pressure or withdrawing statements that I believe to be accurate.

Unfortunately, it’s not always the case that the majority opinion is based on common sense, but in this case, those who are critical of Islamization and mass immigration represent both the majority of the population as well as common sense. We will no longer allow ourselves to be bullied by a radical minority that unfortunately directs much of the propaganda flow through the mass media.

22 thoughts on “The Media Myths”