Our Russian correspondent Russkiy has translated some Arabic-language material to shed light on the practice of honor killing in Arab and Islamic culture.

The Cleansing of Shame
by Russkiy

Honour crimes have been widely discussed in the Counterjihad sphere, including Gates of Vienna, where such reports are usually posted under the “Cultural Enrichment” category, focussing on the fact that this phenomenon is alien to Western culture. Although it’s true that these practices are most endemic in the Islamic world, they are not limited to it. A quick Google search would reveal hundreds of articles discussing honour crimes in the Hindu, Sikh and South Asian Christian communities.

When I was growing up in Russia, the image as portrayed in movies of Southern European people — such as Sicilians, Corsicans, and Spaniards — strongly resembled that of people from the Caucasus and further south, i.e. Muslims, with respect to blood feuds and crimes of honour. Similar to Muslim Arabs, Kurds and Turks, historically Christian Georgians would commit honour killings and take blood vengeance. 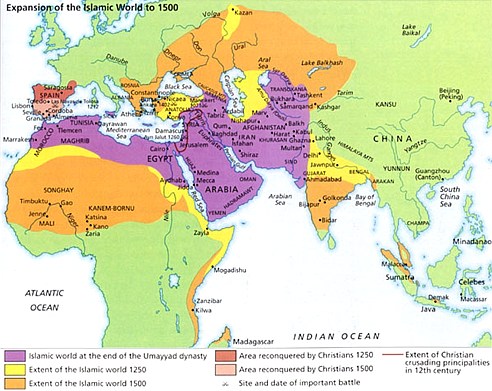 An observation can be made that cultures of the communities in which honour crimes take place have been influenced in some extent by Islam. A case in point is India. The honour crimes that take place in India in the Hindu and Sikh communities predominantly occur in the Northwest India, where the Islamic heritage is the strongest. In the South of India where Islam never reached, this phenomenon is uncommon.

I am proud to say that the honour killing phenomenon is unknown to Russian culture. Based on the research that I’ve done, I can conclude that Northern European culture as a whole is free of this disgraceful practice.

To prove this statement, I have translated a description of crusader social attitudes by an Arab scholar during the time of the Crusades. Usamah ibn Munqidh was a medieval Muslim poet, author, professional warrior, and diplomat from the Banu Munqidh dynasty of Shaizar in northern Syria. His life coincided with the rise of several medieval Muslim dynasties, as well as the arrival of the First Crusade and the establishment of the crusader states. During a time of peace with the crusader state he had the freedom to reside amongst the crusaders. In his memoirs he reported the following about the crusader attitudes on relations between the opposite sexes:

Crusaders completely lack jealousy of the opposite sex. It often happens that a crusader walks together with his wife. Another man meets them, takes the wife aside and starts talking to her while the husband just stands there and patiently waits for them to finish. And if his patience runs out, he simply leaves and lets the wife continue talking.

I have been a witness to an incident where a European trader arrived home to find a stranger with his wife in his bed. He said to the stranger: What had compelled you to lie down in bed with my wife?

This was the extent of his indignation and jealousy.

This observation by a medieval Arab is the proof I had been looking for, for a long time. It proves that the attitudes between the sexes in European culture have always been the same. Throughout the Middle Ages and until now men and women enjoyed healthy relationships, be they marital or plutonic. A woman in Western culture never had to worry for her life if a strange man talked to or looked at her. This cannot be said about a woman in Islamic culture or in cultures influenced by Islam.

It is difficult to judge whether Islam per se is responsible for the evil custom of honour killing. It can be concluded, however, that Islam, being the child of the desert and the Bedouin culture, helped to spread and preserve attitudes that should long ago have been abandoned.

In his study of Iraqi Culture, the Iraqi historian Ali al-Wardi* discusses at length the phenomenon of honour killing. He refers to the phenomenon as the “Cleansing of Shame”. He reports:

In the Iraqi countryside a very common practice is the killing of a woman when she is suspected of misbehaviour. This practice is called “Cleansing of Shame”. This practice is widespread in many areas throughout the Arab world, but I am inclined to think that in the Iraqi countryside it is of greater presence and impact than in any other area. The reason for that in my opinion is the split personality disorder of the society. The “split personality” is the expression I decided to use to illustrate the social contradiction in Iraq due to conflict between Bedouin morals and principles brought to Iraq by the nomadic tribes from the desert and the realities of life in Iraq that impact on these tribes. We have discussed this issue previously in this chapter, but it is seen the most clearly when the subject of Cleansing of Shame is concerned.

It is known about the Bedouins that from time immemorial they have practiced killing of their women if misbehaviour is suspected of them. Dr Fadil Al Jamali says that if it was found that an unmarried woman was pregnant, her relatives would take her away from the encampment, kill and bury her without anyone questioning why. If any Bedouin tried to spread a rumour regarding the misbehaviour of a woman, he would be asked for proof. If he had proof, the woman would be killed; if not, he had to provide compensation for attempting to damage her honour. Here it must be noted that very rarely in the desert would a woman be killed due to misbehaviour. The desert life style of Bedouins helps a Bedouin woman to preserve her honour and reputation. A Bedouin male is honourable in general and does not try to seduce or harass a woman other than in rare exceptions. On the other hand, the woman lives amongst men of her extended family and rarely comes in contact with males from outside. And if circumstances forced the woman to move by herself to a remote location, she would find someone to take care of and protect her.

Dr Paulus Harrison’s account of his travels in Arabia has the following to say regarding this manifestation: I was in a caravan travelling from the oases of Hufuf to the coast of the Persian Gulf. In parallel to the caravan a single Bedouin woman was travelling on a camel at a distance of half a mile from the caravan. If the caravan moved she would move also, and if it stopped to rest she would stop at the same distance. Every evening one of the men from the caravan would take dinner to her. And no one would attempt to harass or hurt her in any way. The meaning of that is that a woman in the desert rarely finds herself exposed to temptation, which means that the Bedouins rarely resort to killing of their women for purpose of Cleansing of Shame.

The real problem starts when the Bedouins move and settle in the Iraqi countryside. They send their women to sell and purchase goods in the markets. At that point women become exposed to temptations and harassment. It is not denied that a woman in the countryside continues to preserve her honour and good reputation, in spite of the new circumstances; however, her ability in this regard is very limited. She is a human being, and not made of steel. The reality is that percentage of women who succumb to temptation is very small; however, this percentage is still much higher than amongst the Bedouin women. It is reasonable to conclude that this percentage increases in the settled tribe due to increase of employment of women in trade.

Settled tribes vary in their adherence to the custom of Cleansing of Shame. Some tribes are fairly relaxed while other tribes keep to the custom to an unbelievable degree. The custom has spread to some inhabitants of towns, especially those who originate in the countryside or those in close contact with inhabitants of rural areas. One of the Baghdadi newspapers a few years ago carried an article about a man who killed his sister, in the village of Salman Bek, because she came in contact with her husband before the agreed wedding night. Another newspaper reported recently that a Cleansing of Shame killing took place in one of the Kadhimiya neighbourhoods. The people of the neighbourhood cooperated in killing the woman, wherein they incited her young brother to kill her, and helped him with money while he went to prison. And after he came out he became in the eyes of the neighbourhood an honourable man who was pointed to in admiration.

The Cleansing of Shame stories in Iraq are so many that they can barely be counted. A friend of mine who was a surgeon in Baghdad for a very long time had conveyed to me some curious stories in this regard. He had carried out post-mortem examinations on bodies of many women who were murdered for the sake of Cleansing of Shame. He observed that some of the women were still virgins; that is, their families had killed them due to simple suspicion or due to malicious rumour.

It is known that in some rural areas of Iraq a man hastens to kill a woman as a result of a simple suspicion, be it truth or a lie. He is not predisposed to investigate and make certain of the matter as the Bedouins do. Such men perhaps believe that a woman is not worthy of such an effort. He kills her right away to cleanse his and his tribe’s shame. He may cut the woman’s hand off and hang it on the door of his house to use it as evidence to prove that he is an “honourable” man. If on the other hand the man refuses to kill the woman, he becomes a joke and an object of abuse. He would not be served coffee at communal gatherings nor be welcomed there.

There is a story circulating, and I have heard it from number of sources, that a man from one of the villages was sitting in a coffee house and someone said to him ‘straw on your agal [the woollen black cord used to support a head covering]’. Upon hearing that the man went home and killed one of his women. When he came back to the coffee house another man told him the same thing and he went and killed another one of his women. In the end he discovered that some straw was indeed stuck to his agal.

I believe that this story is exaggerated a bit and perhaps it is different from the original but in any case it has a social significance that is it illustrates how quickly men in the rural areas resort to killing their wives as a result of a simple word said to them or suggestion by someone of their misdemeanour.

4 thoughts on “The Cleansing of Shame”