Paul Weston presents a media fable for these media-saturated times. 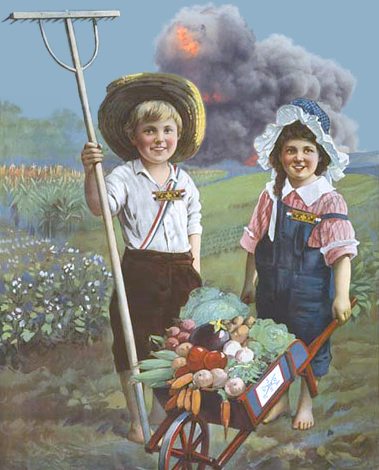 The Boston Marathon bombings raise some interesting questions about the left/liberal mainstream media as personified by the BBC, CNN etc, who as we know, hold a dim view of gun-toting, far-right, Christian hillbillies in flyover USA, and are never slow in informing us about their various dreadful activities. Such as firmly believing in God, for example.

But enough of the leftist media. This essay is not really about reality; it is a totally fictional fantasy made necessary because I am struggling to relate to the reality of what is currently occurring in America and around the world in the reporting on the Boston bombings. Perhaps readers will allow me the indulgence of fantasy at this particular moment, because I can make no realistic sense of left/liberal behaviour.

There are many farmers in fly-over country, so let us give one particular group the fictional name of Sandy Agrarians in this little fantasy essay, who all live in one particular state bordering Texas called Sandy Agraria. In this little-known part of the world the inhabitants practice a devout ideology called Wannabeism which is both religiously and politically far-right. It is easy to spot the followers of this faith, particularly on a Sunday morning, when they descend on their local places of worship clad in blue jeans, John Deere T-shirts and Red Wing boots.

It is easy to spot their wives as well, who demurely walk a regulation five paces behind their husbands, sporting all-in-one denim dungarees with matching denim head coverings. The Wannabeists are not terribly keen on Jews, homosexuals or non-Wannabeists in general. Their holy book requires them to violently advance their religion and they are astonishingly well-funded (figures of eighty-billion Molasses-Dollars are bandied about) as a result of their cornering the global molasses market, a product they term “black gold.”

Now, imagine that after the Twin Towers were destroyed on 9/11 it transpired that of the nineteen terrorists, fifteen were Sandy Agrarians and they carried out this terrorist atrocity in order to further the far-right Wannabeist takeover of both America and the entire world. But in a curious chain of events, the inevitable result of such a declaration of war turned out not to be so inevitable at all. The U.S. authorities methodically weighed up the evidence against the Sandy Agrarians, but in an act of geographical incomprehension sent the National Guard into Sandy Agraria’s neighbour Texas, and gave the startled Texans a damned good thrashing.

Naturally emboldened by this apparent appeasement, the Sandy Agrarians took their terrorist message global, and between 2001 and 2013 they committed upwards of twenty thousand terrorist attacks around the world, and gave financial backing to rebels involved in the Middle East’s Arab Spring in all areas where they thought far-right Wannabeism was lacking.

And then came the bombing of the Boston marathon on April 16, 2013 which killed three people, maimed dozens and injured hundreds. The authorities were on the back foot from the word go, but evidence was slowly pieced together as to who the suspected terrorists might be, starting with the immediate questioning of a suspicious Sandy Agrarian tackled by U.S. civilians in the immediate aftermath of the explosions.

The New York Post reported the Sandy Agrarian angle immediately, whilst other mainstream media outlets noted the police were keen to interview another man, a large-handed white man, dressed in jeans, Red-Wing Boots and a T-shirt emblazoned with the name of a well known tractor manufacturer.

It was at this point the entire mainstream media swung into action. The BBC, CNN and countless left/liberal talking heads went into hyper-drive. The far-right and racist Sandy Agrarians were clearly the probable culprits they told us. Earnest young men in gimlet glasses and shrill women with socialist leanings but wildly expensive hairdressers lost little time in telling us of the racist, far-right background of the Wannabeist ideology and its awful, medieval attitude toward women, homosexuals and all those not of the ultra-orthodox far-right faith.

Within twenty-four hours the entire violent history of Wannabeism was being publicly denounced; links were exposed to Wannabeist on-line literature describing how to build a pressure cooker bomb, just as had been used in Boston, and the twenty thousand Wannabeist terrorist attacks were produced as proof positive that it could only be the far-right followers of this awful faith who were responsible.

After forty-eight hours the left-wing media went into hysterical meltdown when they discovered the Sandy Agrarian initially questioned was not going to be arrested at all, after high-level talks between the governor of Sandy Agraria and U.S. Secretary of State John Kerry! In fact, it was agreed it was better for all concerned if the Sandy Agrarian was simply transported to Sandy Agraria with the promise of no further federal involvement, despite the fact his removal was on national security grounds.

This quite obvious appeasement of far-right Wannabeism made the left/liberal establishment remarkably angry. There were calls for the round-up and arrest of all far-right Sandy Agrarians; students took over their university campuses; marches occurred all across the country where young people of questionable looks, curiously coloured haircuts and metallic facial-wear rioted in their hundreds of thousands as they denounced the total capitulation by the U.S. to the far-right and racist molasses farmers.

And they were quite right of course. After all, in the world of reality as opposed to this piece of clearly ridiculous fantasy, what else could we possibly expect from our rulers and mainstream media? Anything other reaction must surely be both impossible and incomprehensible, unless of course some people are treated in a diametrically opposite manner to others — which surely couldn’t be the case in the left/liberal controlled America of today.