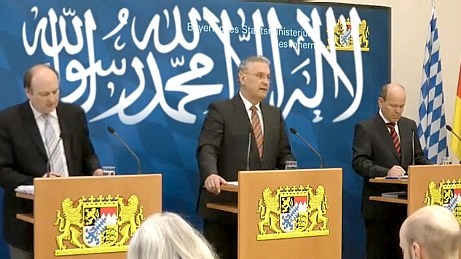 Note: the Arabic text was added to the above screen shot, and is not in the original.

Yesterday the Bavarian Office for the Protection of the Constitution deemed the Munich branch of Politically Incorrect and the party Die Freiheit as potentially anti-constitutional, due to their fomenting of hatred against Muslims. Both will be placed under state surveillance. Bavaria is a Free State within the German Federation, and thus has special privileges that allow it to take such actions.

The state crackdown seems to have been prompted by the success of Michael Stürzenberger in collecting signatures protesting the Qatari-funded Islamic center (read: “mosque”) in Munich.

As one German commentator said, “This is how the Third Reich was made possible. Now I understand how this could have happened back then.”

As an interesting side note, Bavaria is generally the most conservative state in Germany. Minister of the Interior Joachim Herrman, who is leading the charge on this latest repression, is a member of the state Christian Democrats (CSU), which is considered more conservative than its federal counterpart CDU, Chancellor Merkel’s party.

In other words, just as in the UK, the “conservatives” are cracking down on anyone who wants anything remotely resembling political change.

Joachim Herrman was also big on “internet monitoring” after the Breivik massacre. He thought that Breivik proved that monitoring communication wasn’t sufficient, so he suggested telecommunications companies keep logs on websites visited by citizens, as a courtesy to the authorities — in case those citizens might someday become “worthy of suspicion” and need to be investigated. He led an effort to implement “telecommunications data retention”.

None of this really makes sense. The man is supposedly a conservative — he is an extremist with regard to security and monitoring threats — but opposes anyone who thinks that millions of Ottoman invaders might become a problem.

According to the Bavarian authorities, “the right-wing populist Party Die Freiheit fuels general anxiety concerning Islam, which is in violation of the German constitution.” That is, “general anxiety” is really a kind of “hate”.

Many thanks to JLH for translating this feature article published yesterday at Politically Incorrect:

Die Freiheit and PI Considered Hostile to the Constitution

At noon today, Bavaria’s interior minister, Joachim Herrmann (CSU) held a press conference in connection with the publication of the constitutional report for 2012, which dealt extensively with Die Freiheit and PI. Apparently the intensively-conducted citizens’ initiative against the European Islam Center is causing someone headaches. Both of these groups will be under surveillance in future. The Süddeutsche Zeitung‘s instant interpretation is that now they will both be considered “constitution-hostile.” An incomprehensible inversion of reality: Those who would protect democracy and the constitution from a constitution-hostile ideology are now being pilloried. Is anyone still surprised in a Germany thoroughly diseased by Political Correctness?

They spread propaganda inimical to Islam and feed general fears of Muslims. Now the Bavarian interior ministry is classifying the Bavarian section of Die Freiheit and the Munich local of the web group PI as hostile to the constitution. The state office of security has been observing both groups, and groups with closely linked themes, since the end of March, and has identified a hard core of about five persons. Michael Stürzenberger, the state head of Die Freiheit, is considered to be the leader.

Interior Minister Joachim Herrmann (CSU) showed his concern during the presentation of the security report of 2012, because these anti-Islam activities paint all Muslims as enemies of the constitutional state. Since 2012, they have been gathering signatures for the citizens’ initiative against the Ziem mosque project (European Islamic Center in Munich) led by Penzberg imam Benjamin Idriz. Herrmann emphasized that ordinary criticism of Islam or Ziem would not be scrutinized. According to security head, Burkhard Körner, Bavaria is the first state to classify Islam-haters as extremists.

It is a concern that hostility to Islam is increasing in significance in the right-extremist milieu — but not just there. Right extremists are making use of, for instance, the societal discourse on the building of mosques to awaken and/or strengthen common prejudices against Muslims and Islam. They are trying to make use of the fact that other segments of the population are critically confronting Islam, for example in regard to gender equality.

Detached from classical right-extremist circles, hostility to Islam also takes shape in part as a movement inimical to the constitution.

Michael Stürzenberger — spokesman for the local PI group in Munich (PI stands for Politically Incorrect) took over as state chair for the party Die Freiheit. Since then, the state party, also comprising the hard core of the local PI group, has been using the campaign he initiated at the end of 2012 for a petition against the “European Center for Islam in Munich” (ZIE-M) both on the internet and at events, for the purpose of propaganda hostile to Islam.

The activities are aimed at stoking general fears of Muslims as unintegratable adherents of an ideology, and to slander all Muslims on the basis of their faith as enemies of the constitutional state. This damages religious freedom, human dignity and the principle of equal treatment as central elements of our freedom-oriented democratic constitution.

Separated from this is criticism of Islam — for instance in the form of a citizens’ initiative against the ZIE-M — which is permissible under the basic right of freedom of expression and is not extremist. Citizens who support the petition with their signatures will not be scrutinized by security.

As if we had not been saying for a year and a half, every Saturday at information sessions for Die Freiheit: Our attempts to explain things are not directed against Muslims, but against the political ideology Islam. Muslims are its first victims — above all, the women. We want to free them from the bonds of this ideology so that they can integrate into our free, democratic society.

But all of this is consciously ignored. It is really more about combatting a young political force. It may be that the CSU intends to eliminate a possible competitor, as with the Republikaner previously.

Naturally without interviewing us, but in place of that, interviewed the extreme leftist journalist Tobias Bezler, who was allowed to characterize us, as usual, as “right populists.” I did try to convince the editor that it was her journalistic duty to present both pro and con, and let us have our say, but apparently balance is not the issue for Bavarian TV. She did nicely note down the scandalous facts I gave her about terror-supporting Arabic ZIEM financier Qatar and Imam Idriz — known to security — but of course used none of it in her presentation.

Welt-online reports that Mayor Ude and the state capital had been pushing since the end of 2011 to have PI and Die Freiheit put under surveillance by security. In the report by Blu News, the thesis paper is again the subject.

One thing is clear. We will pursue our path undeterred and consistently. In the spirit of the re-founded White Rose,* and deeply aware of being true defenders of freedom and democracy. In contrast to the hypocritical and mendacious mainstream, which willfully ignores the existential threat of Islam.

43 thoughts on “PI and Die Freiheit: “Hostile to the Constitution””