Note: This is one of an occasional series of reports on my newly-developed eye problem. Readers who are not interested in discussions about medical ailments may scroll past it.

Since the condition (choroidal neovascularization, or wet macular degeneration) developed in my left eye, I’ve been wanting to create a diagram representing the symptoms. However, until the maddening disjunction in my eyesight eased up a bit, I was unable to sit down with a pencil and paper to do the math, nor could I stare at the screen while I did the programming to create the image.

It’s been ten days now since my first treatment (an injection into the vitreous humor), and the symptoms have receded somewhat, allowing me to do more intensive visual work. Below is a schematic diagram of the central area of the visual field of my left eye, as it presented itself when the symptoms were at their worst, say about April 1: 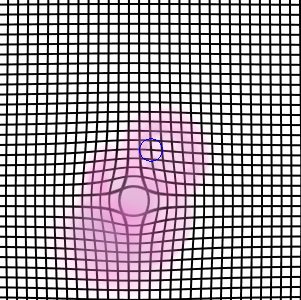 The conceit is that I am looking straight ahead at a white tiled wall. The blue circle represents the fovea, the point of focus for the eye. The magenta areas represent the discoloration of the visual field brought on by the leakage of pigment from the choroid.

As you can see, there is a sort of “bump” in the texture of any surface I look at. When the condition first developed back in late February, I intuited that there must be a swelling in that part of the retina. This was in fact the case, as borne out by the high-resolution retinal scans done at the specialist’s office.

(By the way — the diagnostic equipment now available to ophthalmologists and retinal specialists is truly astonishing in its capabilities. By various techniques, the doctor is able to obtain precise detailed maps of the surface of the retina that include the topology of the affected area with color-coded regions of fluid seepage.)

That bump is why my two eyes won’t work together any longer, at least for close-up activity. My brain can’t make the two images gibe with each other — it can’t find an acceptable overlap. The muscles keep pulling and tugging trying to align the eyes and adjust the lenses to make a fit, which causes muscle exhaustion, eyestrain, and headaches.

Hence the patch on the left eye when I do detail work. Other activities using both eyes that don’t include the necessity for a close focus, such as driving, are not so bad. And now that the worst symptoms have eased off — the bump is much less noticeable — I can enjoy everyday chores once again.

The effectiveness of the first treatment has made me optimistic, and I expect an eventual return to something approaching visual normalcy (normal for a person with hyperopia, anyway), albeit with reduced acuity in a portion of the retina of my left eye. The treatment is agonizing and expensive, but well worth it — a needle in the eye seems a small price to pay to remove that fundamental discord of perception, as if the brain itself were split into two disjointed parts at war with each other.

If you ever develop symptoms like those in the diagram, you can tell the doctor that you have either central serous choroidopathy or choroidal neovascularization — chances are you’ll be right.