Enza Ferreri takes a look at the behavioral sink that Britain has become as a result of aggressively-imposed orthodox atheism. 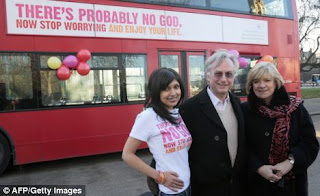 The seeds of nihilism are sown…

There he can see exactly the kind of society he is trying to promote and propagate.

People who appear on the show have been living the sort of life which was advertised for £140,000 on billboards all over buses and underground trains across England, Scotland and Wales, in London, Manchester, Birmingham, Glasgow, Edinburgh, York, Leeds, Newcastle, Dundee, Sheffield, Coventry, Devon, Liverpool, Wolverhampton, Swansea, Newport, Rhondda, Bristol, Southampton, and Aberdeen a few years ago for weeks, with the message: “There’s probably no God… now stop worrying and enjoy your life” — a campaign and message that Dawkins totally endorsed.

She (little known comedy writer Ariane Sherine, who the article calls the “brains” behind the campaign) said she wanted to promote her own message that people can believe whatever they wanted. (It certainly takes a great brain to come up with such a formidable idea.)

Speaking at the launch of the campaign in central London, Ms Sherine said the sheer number of donations received had demonstrated the strength of feeling in the UK.

Obviously a vast number of people are never so happy as when they are encouraged to do just exactly whatever they like and indulge in any fancy they may have, reassured in the belief that this is the right course of action by “luminaries” and intellectual authorities à la Richard Dawkins, with the full backing of science, no less, behind this highly satisfactory claim.

The consequences of choices and actions, though, pace Dawkins and that superb “brain” of Ms Sherine, are not just in the afterlife but in this one as well:

…and the fruits are harvested

And the consequences of the “stop worrying and enjoy your life now” lifestyle, when embraced by large swathes of society, can be calculated at the time of the Budget and seen as a form of public entertainment in TV broadcasts like The Jeremy Kyle Show (undoubtedly there are many others similar to it).

The show’s guests have “enjoyed” their lives all right, if by “enjoyment” we intend overeating (this they do not need to declare, you just have to look at them, especially the women), booze, drugs, not working, and above all — by far the most frequent reason that brings them to this TV production which promises them solutions, therefore indicating that this is what has the most serious consequences in their lives — sexual promiscuity.

The expressions — usually uttered by Kyle — “unprotected sex” and “unsafe sex” are sprinkled all through the chats, which are in fact rows and shouting matches. Hearing those phrases makes me shudder. The very fact that we have come to see sexuality as an activity that has to be treated with surgical gloves, that we need to put the mechanistic, physical, even medical, aspects ahead of everything else — because there is little else left — demonstrates our society’s general confusion and failure in its sexual ethics.

The show is a carousel of different people who are in fact all the same, exactly like a rotating carousel always represents the same figures.

They need the program to pay for two recurrent types of test: DNA paternity and lie detector.

Uncertainty about who fathered whom reigns supreme, as about who cheated with whom, how many times and to what level of sexual intimacy: it is hoped the DNA test will help with the former, the lie detector with the latter.

Here we have the dream of Richard Dawkins made reality in the flesh of the underclass: no God, no rules, no certainty, no faith, in particular no faith in other people.

Who needs faith when we have science? And who needs trust in a relationship when we have the products of science in the form of DNA paternity test and lie detector test?

44 thoughts on “Effects of Atheist Propaganda Come Home to Roost”