During the recent sectarian violence in Burma, the media widely reported what was happening as the “ethnic cleansing of Rohingya Muslims by Buddhists”. Our Spanish correspondent Hermes presents a slightly different view of what is currently happening in Burma. 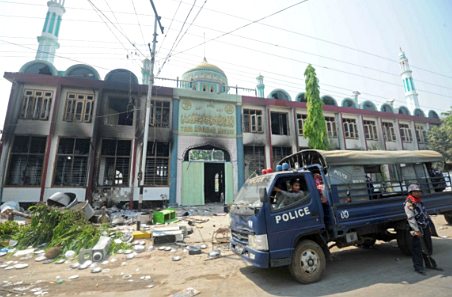 Last Sunday an article appeared at the online version of the German magazine “Spiegel” in which the author gave an account of the activities of a so-called “Buddhist neo-Nazi group” in the course of the recent unrest and clashes between Buddhists and Muslims which took place in Myanmar. As the well-informed reader may expect from the mainstream magazine of a land in which, according to the philosopher Peter Sloterdijk, “whoever is not a social democrat ends in a madhouse or in another land”, the article was all but unbiased in its efforts to describe the situation in this South Asian country, pinning the blame exclusively on Buddhists, and portraying Muslims as the defenseless victims in need of all sorts of help.

The author of this article went into discussing the activities of the Buddhist self-defence group 696, and cited the words of the so-called “human rights activist” Maung Zarni, who called this self-defence group “the most dangerous Buddhist neo-Nazi group in Burma”.

A Buddhist neo-Nazi group in Burma? “The most dangerous” one? How many “neo-Nazi” groups are there in Myanmar, then?

Well, now we have just learned that non-whites can also be called neo-Nazis and be depicted as the most despicable and evil racists on earth if they dare to fight back against Muslim savagery and jihad targeting, in the case we are now dealing with, Buddhists in Myanmar. The leader of this group, a monk named Wirathu, is immediately dubbed “Burma’s Hitler”.

Again, we have just learned that people fighting against Muslim domination and opposing global jihad can be called “Hitler” regardless of their skin color, ethnicity or religion. The only thing which really matters is the utter vilification of Counterjihad activists.

We have already seen many paranoid and bizarre examples of this long-standing leftist tradition of harassing, defaming and ridiculing free-speech activists in the most cowardly and barefaced ways. The blogger Fjordman has also been defamed in the same way as Wirathu with the usual spectacular idiocies which one can always expect to hear and/or watch from the sort of left-leaning people who have from the very beginning left aside common sense and sanity. What is still left to determine is the level of paranoid hate the Left can express towards anybody who has the guts to protect themselves and their culture against the Left’s most beloved “oppressed group”, a group which has been oppressing (and massacring, enslaving, raping, beheading, etc.) people from all ethnicities, religions, sexual orientations and classes for over 1,400 years.

The author goes on saying that “Even if president Ye Hut plays down the issue by saying that Wirathu and his followers are just a small radical minority among the 500,000 monks in the land, this does not mean that this extremist group is not dangerous. Their racist messages are successful.”

Well, apart from the fact that, if we stick to the original meaning of the word “racist” and ponder its meaning, then any normal person with a healthy way of drawing logical conclusions will immediately realize that Muslims are not a race (any person from any race can convert to Islam), it is clear that as in many other cases regarding self-defence against jihad, the word “racist” is used to scare you and others away from:

The article also depicts Wirathu as a criminal and a creator of conspiracies: “His credo was and is that the Burmese Buddhists must protect themselves against the ‘Muslim conspiracy’, because if not, then the country will turn Islamic at the latest in 100 years”. And another article goes on saying that “Wirathu’s rhetoric is flush with conspiracy and paranoia. He claims that Muslim merchants receive cash injections from Middle East oil state brethren and use these funds to undercut Buddhist rivals.”

Sound familiar? Has the concept of Eurabia also not been declared to be a hoax and a colourful conspiracy theory? Have those warning about Eurabia not been treated as paranoid mavericks and fuellers of “Islamophobia”?

Readers who still might not have had the opportunity to know more about Eurabia can check this and decide for themselves whether this thesis is fictional or not.

Well, as it later came out, all those unrests were ultimately caused (may I say “of course”?) by the Muslim owner of a gold shop, his wife and an employee, who have all already been convicted of theft and assault. It is a dispute at the gold shop in Meikhtila that is thought to have triggered the clashes between Muslims and Buddhists. Allegedly the problems originated because of a small piece of jewellery. A fight broke out, and according to the reports, the Muslim shopkeeper beat the Buddhist customer about the head. An attack on a Buddhist monk followed afterwards. The monk later died in the town hospital.

The hair-raising and astonishingly barefaced MSM lies about the so-called “Ethnic cleansing of Muslims in Myanmar” and the alleged brutalities of the monks which followed this are nothing to be surprised about, of course. In the words of Oswald Spengler: ““To-day we live so cowed under the bombardment of this intellectual artillery (the media) that hardly anyone can attain to the inward detachment that is required for a clear view of the monstrous drama.” These words are more valid today than ever before.

There is no hope at all for those who follow the MSM news to ever get even a tiny glimpse of objective truth. It is tragic indeed, and very depressing, for those who believe in freedom of information and unbiased news reporting.

Luckily enough, Wirathu has been given a voice at the Burmese online magazine “The Irrawaddy”. His declarations made to this magazine allow us to know the side of the story which the MSM so dhimmishly conceal:

“…I have been told about many cases, such as cases of fighting between Burmese and Muslims and rape cases of 4th- and 7th-grade girls. Most rape victims are students. Other cases are physical attacks and insulting Buddhism — to tell you the truth, there was a case of verbal abuse of monks. Other cases include illegal mosques; mosques and Muslim graveyards constructed without government permission. I’ve received over 50 such cases and I provided suggestions in over 100 cases. I told them to solve the cases in accordance with the law and most take my advice, even the senior monks. Everything is fine as I deal with the cases within the law. In our community, the real 969 [campaigners] do not use violence”.

This shows great contrast with what the article in Spiegel writes about him: “The radical monk is extremely dangerous. Because in the climate of fear and violence heated up by Wirathu […] our land will no longer be peaceful.”

But nevertheless Wirathu is very aware of the real danger. He says that “If you buy in a Muslim shop, then your money does not remain there. It will be used to destroy your race and your religion.” That is, the money spent in a Muslim shop (or at least a part of it) will inevitably be used to fund any of the various forms of jihad.

This economic aspect of the issue allows us to draw our attention to another important feature of Wirathu’s initiative. According to another MSM article:

“This crisis is erupting in concert with the fast-spreading 969 campaign, which draws its code from a numerological arrangement of Buddhism’s core teachings. It is ostensibly a pride movement that urges Buddhists to patronize Buddhist shops. But the loudest proponents of 969, a set of nationalist monks, urge followers to avoid all shops unwilling to fix the 969 emblem to their storefronts. […]”

As one may have already guessed, this was dubbed as racist and nationalistic behavior, a sign of utter intolerance towards Muslims, a merciless “crusade” (it seems that the term “crusader” applies from now on not only to those of Christian faith; when it comes to “discrimination” against Muslims, certain words are suddenly granted an endless freedom of usage) against shops owned by Muslims. A Buddhist vendor was so daring as to declare that “‘Buddhists should go with Buddhists,’ he added, his eyes darting to a trio of Muslim men standing nearby and his voice lowering to an uneasy whisper. ‘And Muslims should go with Muslims.’”

I can almost hear beforehand the screams and curses leftist readers may eventually utter when reading this. Oh yes, some need nerves of steel in order to be able to overcome such “horrors”…

But, as always, the MSM forgets to convey the other side of the story, that which uncovers the full picture about the activities of the Burmese Rohingya Muslims.

Wirathu again: “Well, it is not the Burmese way, but a Muslim way and they do practice this [marking their shops with “786”]. So go around town and see how many Muslims visit Burmese shops. If they support their own shops, why won’t we Buddhists [Burmese] do the same? If we support our Burmese shops, we will not have problems and it cannot be that bad. Look what happened in Meikhtila; if people supported the Burmese gold shops then there would not have been an argument. [The unrest in Meikthila supposedly began as a fight between a Muslim gold shop owner and a Buddhist customer.] This kind of buying behavior doesn’t mean it’s discrimination. It can protect our people’s interests.”

So, after having been allowed to get the complete picture of the issue, one realizes that this 969 initiative was nothing more than a self-defence response to the initial intolerant and kuffar-excluding Muslim measure of marking their own shops with the “786” symbol. It is the Muslims in Myanmar who seem to have been the first to introduce this protectionist measure of supporting their own shops and excluding any commercial relations with Buddhist shops or customers, in this way excluding themselves from the rest of the kuffar Burmese population, which is a very logical way of behaving on the part of Muslims:

Sura 3:28 — Let not believers take disbelievers as allies rather than believers. And whoever [of you] does that has nothing with Allah, except when taking precaution against them in prudence. And Allah warns you of Himself, and to Allah is the [final] destination.

And what is more tragic: if those Buddhist had followed the almost life-saving rule of do business only in Buddhist shops (oh, yes, sooo nationalist…), then nobody would have been hurt and no one would have died.

Neither Buddhists, nor Muslims.

And last but not least, let us have a clear picture of the religious situation of Buddhists in Buddhist Myanmar:

Buddhists are seen as kuffar in Islam, just as are Christians and Jews. But while Christians and Jews have a God and are considered merely “infidels” allowed to live in a Muslim environment as long as they pay the Jizya and willingly submit, Buddhists only have two choices: to convert to Islam or be killed. Jizya does not apply to them.

This is why Buddhists are at the top of Islam’s death list.