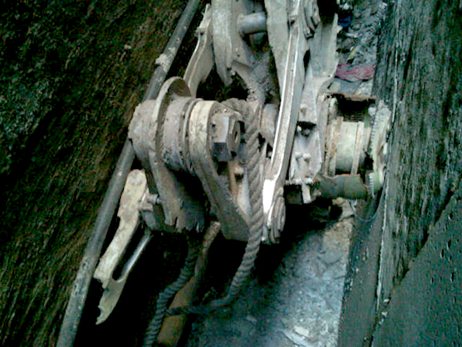 I shortened that title simply because I prefer short ones. However, the complete version is here.

Yep. I chose Pamela Geller’s version of the story, the one she published on the 25th.

I chose hers because it is the most heartfelt version, and because she has put so much time, energy and money into this pushback, and because her very being has gone into protecting Ground Zero from the Ummah. It is a visceral response.

I chose hers because paramount to her telling of the story is her identity as a New Yorker. Don’t get me wrong — New Yorkers are Americans through and through. But they’re a different breed of us: a faster gait, a rapid pulse, voices raised, words tumbling out of their mouths in their own characteristically quick-paced tempo. New Yorkers possess a hypertrophied sense of place, they live in the certainty that this is where everything worth knowing or doing or being begins.

Every New Yorker knows why the City was chosen as the first target of the Nineteen Creepy Bridegrooms: destroy our nerve center and the rest of the country would be a chicken with its head cut off. Washington? Strategically it must have been a secondary target; no doubt the B team terrorists were assigned to bring it down, but only after the Towers were infernos.

Pamela Geller has been a fearless fighter against the monstrous idea of a mosque intruding itself upon the hallowed space of Ground Zero in New York City. I have always believed the precise reason for their bullying intrusion into our grief was to remind us as graphically as possible that the horrific deaths of thousands of people on September 11th, 2001 is their doing. They are like mobsters having the gall to show up at the funeral of someone they contracted to have rubbed out.

Putting the mosque up was clearly standard operating procedures, taken right out of the Koranic manual of Jihad. Yes, we’ve learned more than we ever wanted to know about Islam in the intervening years since 9/11. One fundamental truth is this: once they have conquered a piece of territory they never ever give up. Even a cemetery with dead Muslims in it belongs to the Ummah.

That’s one of the reasons they take such offense at the name of our blog, though we didn’t realize it when we started out. All we knew was that it seemed fitting to remind our readers that once upon a time there had indeed been a miraculous victory for the West in its war against Islamic totalitarianism; this triumph stopped the further encroachment of Muslims for many centuries — at least until the suicidal mind-worm inched its way into the Western psyche, and suddenly Europe decided that importing thousands of Mohammed’s disciples into its sovereign nations was a capital idea. This notion has much in common with the West’s other suicidal venture, known cynically as “the war to end all wars” and subsequently dubbed “World War I”. Both “world wars” succeeded in killing off much of the best and brightest of European manhood — as can be attested to by most of the ‘leaders’ we’ve ‘elected’ ever since.

Our learning curve at Gates of Vienna has included a course you could call Islam Hates Any History That Makes It Look Bad. A corollary is that Truth itself is repugnant to Islam. Understanding this makes it easier to grasp why Islam is eager to twist history, and even more, why it is so eager to destroy historic artifacts. After all, if you keep the evidence of the past around for future generations to ponder, mightn’t they discover the Truth?

Islam flees from the Truth the way evil flees from the light. Western philosophy has always taught Truth as part of a triumvirate, Truth, Goodness and Beauty, and has applauded the search or creation of all of these as worthy endeavors. But none of them exist for Islam except as they may on occasion serve the interests of the Ummah. Thus in Mecca, beautiful or historic buildings are destroyed because they represent Idolatry. Or perhaps more to the point, they are historic, and Islam, upon close examination, is beginning to seem more and more to be a Gigantic Lie.

Look at poor Egypt. The grandeur of its past is long buried under the desert Islam made of its wheat fields as the conquerors destroyed the intricately engineered irrigation system which harnessed the Nile (see the greenhouses in Palestine for a modern version of the same phenomenon). Egypt’s grains — once upon a time — made it the granary of the Mediterranean. Its papyrus production allowed easy literacy. No more. Now Egypt’s superstitious, illiterate populace faces famine unless the West comes to the rescue. For sure their oil-rich Arab brothers won’t feed them. What is the profit in that? And now the new regime threatens to destroy yet another library, kill the artists and dancers, and — if they can — destroy the Pyramids. For this last crime alone they ought to be driven out of power, but the pusillanimous ‘leaders’ of the West will tell us they can’t interfere.

Now on to the tale of the newly discovered landing gear. You decide if Pamela Geller has the story right or if that esteemed British MSM outlet, The Daily Mail is more accurate [disclosure ahead of time : I’m with Atlas Shrugs on this one, whatever the particulars turn out to be — D]

We always knew that the landing gear from the 911 planes that flew into the towers had crashed through the roof of the Ground Zero Mosque building (Park 51). It was why we urged Congress to designate a 911 War Memorial. Because it is a War Memorial.

The news just broke yesterday that Gamal has purchased both buildings adjacent to the proposed mosque. What are we looking at now? A triumphal mosque three times the size of the original plan? Where is he getting the funds? He hasn’t paid the rent on the GZM building and has lost ongoing litigation against landlord Con-Ed. He unsuccessfully attempted to get Ground Zero development funds from a 911 fund, which fell through after millions of Americans responded with calls, letters, emails etc. Over 70% of the American people opposed that mosquestrosity.

Gamal not only beats people up and threatens Muslims who spoke out against the mosque, but he is also a tax cheat, owing a quarter of a million in taxes while defaulting on not one but two bank loans. All this while being evicted from his Soho offices for non-payment of rent. Oh, and this deadbeat applied for $5.5 million from the taxpayer 911 fund to rebuild lower Manhattan.

Be warned, Gamal, we will be back with tens of thousands to protest. We knew he’d be back, well, so will we.

A part of a landing gear, apparently from one of the commercial airliners destroyed on September 11, 2001, has been discovered near Ground Zero.

The part was wedged between the rear of 51 Park Place and the rear of the building behind it, 50 Murray Street, in lower Manhattan, police say.

The NYPD is securing the location as it would a crime scene, documenting it photographically and restricting access until the Office of the Chief Medical Examiner completes its health and safety evaluation protocol.

A decision will then be made concerning sifting the soil for possible human remains. The aircraft part will not be removed until the process is completed, at which point it will secured by the NYPD Property Clerk. The part includes a clearly visible Boeing identification number. The investigation began after surveyors hired by the property owner who were inspecting the rear of 51 Park Place on Wednesday called 911 at approximately 11 a.m. to report what they identified as apparent damaged machinery behind the building there.

The proposed Ground Zero Mosque is called the Park51 development (previously called Cordoba House) and is at 45-51 Park Place.

ABC News confirmed that the building is a mosque without referring to the controversy over the Ground Zero Mosque.

Then there’s this from The Daily Mail:

Well, there’s a nice unbiased headline for you.

The Mail quotes the lawyer for the Ground Zero mosque, who called it a gimmick. Like, what else can he say?

But they also show this video, which has a more open-ended explanation as to how the landing gear managed to be wedged between two buildings in the vicinity of all that carnage:

As Ms. Geller makes clear, the fellow in charge of Ground Zero has some character issues that at the very least make him untrustworthy. Not the kind of person you’d want to buy a used car from.

Given the environment down there: urban and old, with two buildings almost jammed together and one of them dating back to 1850, one can see why it would take a property line survey to discover that landing gear.

On that terrible day of September 11th, machinery and bodies were mortally tangled in the gruesome chaos wrought by evil. If the Police Department follows through on its decision to treat this as one more part of the 9/11 investigation (just as they are now re-sifting the debris for bodies and body parts), then someone is going to have to crawl into that narrow space and — yes, once more — sift the surrounding area for whatever human fragments may have been slammed into that crevice. The landing gear would then have served as an icon of sorts: a tombstone for yet another unmarked grave.

If you plan to comment on the fact that I’m writing about a story Pamela Geller is covering, don’t. There is no hidden agenda. Yes, we’ve had our public differences, but those have only ever occurred when Gates of Vienna responded to an attack on us or on someone whose well-being is important to our work. Loyalty has always been a fundamental principle here. Unfortunately, this sometimes led to sad, difficult choices.

If you’re curious as to why I chose the Atlas Shrugs post to use as a discussion of the news about the landing gear found at the Ground Zero Mosque, that’s simple. I did a quick Google search and her name popped up near the top. I remembered how very diligently she worked to keep that mosque out of Ground Zero, so it seemed a natural choice to promote what she has to say.

In other words, life is short.

Thanks to Vlad for uploading the video.