Note: the following post is not an April fool joke. 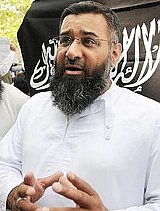 The notorious Ilford firebrand Anjem Choudary took a road trip across the frozen wastes of Northern Europe (no, I’m not exaggerating — have you seen the latest news reports from the Baltic?) to visit his brother mujahideen in Finland.

Over the years we have come to expect the most entertaining harangues from Mr. Choudary, and, sure enough, he didn’t disappoint us in Helsinki. He told the “Finns” in his audience what he tells listeners in Britain, France, Belgium, and all the other European countries he visits: that sharia law is coming to Europe, whose inevitable fate is to be ruled by Islam.

Below are excerpts from a YLE report on the event:

British Islamist preacher Anjem Choudary told a gathering in Helsinki last week to be proud to be considered terrorists.

Choudary was in Helsinki last Thursday to speak at a secretive gathering held to mark the tenth anniversary of the jailing in Norway of Kurdish radical Islamist leader Mullah Krekar.

Last week, the Finnish Security Intelligence Service (Supo) confirmed to Yle that it was aware of the gathering. A Supo representative also told Yle at that time that it has long been known that there are increasing numbers of individuals in Finland with links to radicals.

According to the British newspaper The Sun, Choudary spoke to 60 Kurdish immigrants, telling them to “rise up” and predicted the Islamic flag would one day fly over the Finnish parliament building.

He told his listeners to be proud of being considered terrorists. Choudary also said that being called radicals means that they do not compromise.

A 2.5 hour video of the address was posted on YouTube.

On the Finnish blog Otsikko, Junes Lokka has posted a transcript of the English-language portions of Anjem Choudary’s address. Much of the text is the usual Anjem boilerplate, but some choice passages are worth excerpting:

Wherever we find nowadays, my dear brothers, my sisters, we see that allah is testing the umma. But allah said in the koran:

Do not feel down, do not feel depressed: you are the best if you are believers.

Islam is superior and will never be surpassed. So as Muslims, yes, we suffer: this life is the place of test. This is the samaan of intila, of tamhis. Allah will test you with your family, with your health, with your wealth and he will as well test you with an enemy over you.

therefore our objective, my dear brothers, is not to establish our deen in our home or only in Finland or in Britain, but the whole world must be governed by the shariah

Therefore, my dear brothers, we believe, in our heart, we have the akiid, that one day the whole world will be governed by the shariah and islam.

Even this Eduskunta, this Parliament of Finland will one day have the flag of la ilaha u illalaa over it.

Eventually, my dear brothers, the kuffar, they will pay much money, they will spend much effort, but they will lose. This is the destiny for them, because Allah has promised victory to the believers.

So, my dear brothers, you can see around the world, in Europe they have the occupied phenomenon: they are fed up of democracy and freedom and liberalism. They have a lack of housing, poverty, alcohol, drugs, they have no ambition in the West. If you look at Britain, your income does not meet your everyday living expenses. The elderly have to choose between gas and electricity and food in the winter.

the same, my brothers, in France, in Finland, in many countries in the West.

And all of them will fall and allah will replace them, inshallah, with the khalifa implementing the shariah and declaring jihad mubada.

My dear brothers and sisters, alhamdulilla the Muslims are rising all around the world, and it is because of this that the kuffar feel the threat. For decades, for generations, they kept the Muslims silent.

They destroyed … the 3rd of March 1924 [the abolition of the Caliphate by Kemal Ataturk].

They thought that was the death nail in the coffin of the Muslims, but allahu akhbar, wherever we look around the world, the Muslims are in a state of revival. They call it for the khilafa and those people who speak the truth, who call for the shariah, who say that the jihad is obliged to liberate our land, who say that we must be united together…

The shariah was implemented in Spain for over 800 years.

When the British in England were throwing their feces out of the window, they had running water in Spain.

They had … they had hospitals, they had libraries, they had pavements, they had street lights. Over 4,000 books in just a house of a normal imam …

The French had at that time in their own library 50 books; 45 of them were bibles.

This is the difference between our own history.

They talk about the Dark Ages… Dark for them, very bright for us, as Muslims!

We will establish the shariah wherever we are. You are part of a global ummah, my dear brothers. Together we can be strong, together we can eliminate enemies…

how about we establish the khilafa as gift for our children as gift? Isn’t that better?

Hat tips: For the YLE article, Fjordman; for the Otsikko post, KGS.