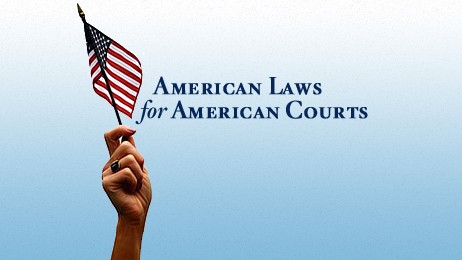 Preventing the application of shariah in American courtrooms is an arduous task. Opponents of Islamic law cannot approach the issue frontally — shariah-specific initiatives are seen as “targeting a religion”, and are thus struck down on First Amendment grounds. However, by crafting legislation that is neutral with respect to religion, Constitutional problems can be avoided. That’s what the American Laws for American Courts project (ALAC) is about — it simply insists that no foreign laws that violate American law or the U.S. Constitution may be used to decide cases in American courts.

Even that approach, however, is problematic at the national level, because senators and congressmen are so allergic to any issue that might entangle them with Islam and invite accusations of “Islamophobia” from CAIR and its ilk. As a result, ALAC has focused on individual states, where legislators are more receptive to their approach.

ALAC just won an important victory in Oklahoma. Below is the press release sent out today by the Center for Security Policy:

Oklahoma City, OK April 19, 2013 — The American Laws for American Courts legislation to protect the fundamental constitutional rights of all Oklahoma residents against foreign legal doctrines, such as Shariah, was signed into law today by Governor Mary Fallin.

This unequivocal victory for Oklahoma and US law is the latest vindication of a long-term national trend supporting constitutional protections for ALL Americans against foreign laws and foreign legal doctrines, such as Shariah, that have found their way into our court systems.

Center for Security Policy President and Chief Executive Officer Frank Gaffney applauded the passage into law of this important legislation:

“Oklahoma has played an important role in protecting America’s justice system from the incursion of foreign laws and foreign legal doctrines, such as Shariah. American Laws for American Courts is the primary 21st Century civil rights initiative to ensure constitutional liberties for all Americans. It is needed especially to protect women and children, who have been identified by international human rights organizations as the primary victims of discriminatory foreign laws, Shariah in particular.”

The bill won a decisive bipartisan victory in both houses of the Oklahoma legislature. It was approved in the House of Representatives by an 85-7 margin and in the Senate by a 40-3 margin.

The legislation, sponsored by State Representative Sally Rogers Kern in the House and State Senator Gary Stanislawski in the Senate, is based closely on the American Laws for American Courts model promoted by the American Public Policy Alliance (APPA), which had previously won similar bipartisan approvals in Tennessee, Louisiana, Arizona and Kansas.

“Today the will of the vast majority of the citizens of Oklahoman was acknowledged when HB1060, American Law for American Courts, was signed by Gov Fallin. Three years ago 71% of the voters approved State Question 755 prohibiting the use of Sharia Law in Oklahoma. That SQ was declared unconstitutional because it named a particular group. I have worked for three years to get ALAC passed so that the citizens of Oklahoma will be protected by the fundamental rights and liberties that our US Constitutional upholds without the fear of any foreign law being used against them.”

A host of community and interfaith organizations came together to support the effort to pass this important legislation in Oklahoma, which culminated in the signing on Thursday.

A copy of the bills can be read here.

One thought on “ALAC Wins One in Oklahoma”