As reported here a few weeks ago, Mohammed the Roundabout Dog, the notorious creation of the Swedish artist Lars Vilks, has gone on a tour of Europe. Chris Knowles of the International Civil Liberties Alliance (ICLA) has written a report on the Modoggy Tour for Dispatch International. 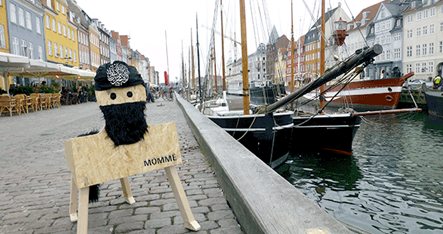 The Roundabout Dog Tour is inspired by the artwork of Swedish artist Lars Vilks. It intends to visit 60 European cities to highlight the importance of free speech. As in many campaigns before it, art is used to highlight the issues. Lars Vilks produced his Roundabout Dog series of drawings in response to the atmosphere of censorship that has enveloped Europe in recent years. He has been demonised, threatened and lost his livelihood because of the stand he took.

The drawings themselves are not on tour. Instead, the tour involves a plywood mock-up of the roundabout dog and it is this mock-up that visits the various cities. The plywood roundabout dog was created by a Swedish society called Free Speech Europe. It is non-political and promotes freedom of expression by supporting those who have been “blacklisted” or persecuted because of their political or artistic expressions.

The Tour emphasises the right of Westerners to follow Western values in Western countries. Sadly, there will be those who claim that the tour is a deliberate act of provocation. They will say nothing about the provocation from those who tried to censor Mr. Vilks by threatening his life. Censorship by threat of violence is not a Western ideal and the only way to stop such threats is to defy those who do the threatening. The tour represents this defiance, courage in spite of threats!

The doggies are on tour not to offend Muslims or Islam but to make a serious point of principle. Muhammed may be important to Muslims, but freedom of expression is important to Westerners. Restricting expression is a political act and if done in the name of religion then religion becomes a legitimate subject of political debate, satire and criticism.

If political debate is not possible then neither is democracy. Censorship and self-censorship represent a slippery slope to a non-democratic way of life. Everyone needs to understand this if society is to be a place worth living in. As such the tour is a mechanism to create understanding and to help ensure that communities are brought closer together.

So far the debate has been one-sided. When one side in a debate has to make all the concessions, the long-term prospects for social harmony are bleak. The doggies are there to restore balance to the debate.

Many activists who joined what has become known as the Counter-Jihad community were motivated by the issue of freedom of expression. During the ‘Danish Cartoons Crisis’ lovers of freedom were shocked at the attitude of governments and media with regard to this most basic of freedoms. Not only did governments and the media not come to the aid of free expression, they actually began to demonise its protectors. The doggies obviously were absent from the scene at that time.

If governments and the media had stood up for freedom of expression back then, people would not be so afraid of Islam today. The Counter-Jihad might never have come into existence and the label ‘Islamophobe’ to demonise those who favour freedom would never have been invented. The doggies would probably never have been born.

Those who are trying to undermine freedom of expression are causing offence and fear in the West. The intention of the censors seems clear — to establish Islamic taboos, taboos for all of us. It is an example of a religious group imposing its values on those who do not follow their religion.

Under sharia it is considered idolatrous to depict the prophet of Islam in visual form. The publication of the Danish Cartoons broke a sharia law. It did not break the law of Denmark. In response Muslims held aggressive protests. Placards were displayed inciting angry Muslims to commit acts of violence. In the UK the police allowed this and the message that came across was that sharia law trumps freedom of expression.

Policy-makers have pretended that the basic incompatibility of free speech and Islam does not exist. They have mistaken the Western willingness to compromise as a solution to the problem. They have ignored the fact that continuous compromise is unsustainable. Perhaps the only real solution is for freedom of expression to prevail in the West and for the banning of cartoons depicting the Islamic prophet to prevail in Islamic states. That way the doggies would only go for a walk in the West. It would be a way of demonstrating mutual respect.

The doggies are very friendly and do not want to cause offense — they just want to make their point. They are on tour to stop people feeling threatened. If Islam develops a live and let live attitude, then the doggies will have accomplished their task. The doggies have already been taken for their walk in Lund, Malmö and Copenhagen. Rumour has it that they may soon be visiting Odense. More information about the Roundabout Dog Tour can be found here.

Exhibitions of Lars Vilks’ artwork itself are also at the planning stage and hopefully will take place in Munich, Vienna and London.

Chris Knowles is a British human rights activist who specialises in the negative impacts of sharia on human rights. He campaigns with the International Civil Liberties Alliance (ICLA), http://www.libertiesalliance.org/, where he writes as “Aeneas”.

4 thoughts on “A Roundabout Way to Promote Free Speech”