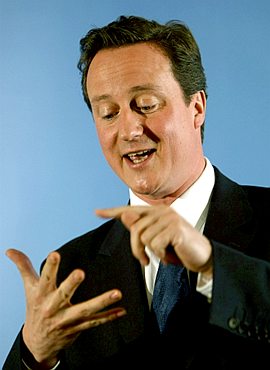 British Prime Minister David Cameron appears to have reversed course in his attitude towards the English Defence League. Below are excerpts from a Telegraph account of Mr. Cameron’s press conference earlier this morning:

Before returning to Number 10 to tackle the urgent issues surrounding the current immigration crisis, Mr Cameron stopped to answer a few questions from the media.

A reporter asked him if his attitude towards the EDL had softened. “Actually,” he replied, “I’ve recently discovered that the EDL and I share quite a lot of common ground. I think it’s time we took a fresh look at the organisation.”

He ticked off several points on his fingers:

“Number 1: EDL activists are patriots. I share their love for this country. If they continue with their reasonable, non-violent approach to the urgent issues that confront us all today, I don’t see any reason why we can’t work together towards our common goal — which is what is best for Britain and the British people.

“Number 2: The EDL have proven their dedication to the cause, advocating tirelessly — and without any pay, mind you, unlike cabinet ministers and civil servants — for the well-being of indigenous Britons. This kind of selflessness must not go unrecognised, in my opinion.

“Number 3: The EDL agrees with me that Multiculturalism has failed. Therefore —”

At this point the Prime Minister was interrupted, and failed to finish his thought. He did, however, say that he was amenable to meeting with Stephen Yaxley-Lennon, aka Tommy Robinson, the leader of the English Defence League.

“Tommy and I have lot to talk about. I didn’t realise until recently how similar our viewpoints are. I wouldn’t mind sitting down with him for a bit of a chat, maybe have a drink together someplace.

“When I get a bit of breathing room, I’ll pop round to Luton and look him up.”