The Israeli journalist Alexander Maistrovoy returns with a report on the newly-awakened reverence for the Golden Horde by the Muslims of Tatarstan.

The Green Banner of Batu Khan
by Alexander Maistrovoy

Waves of Islamic fundamentalism have engulfed Russia; the Kremlin continues to woo the Islamists, with Hamas among them. 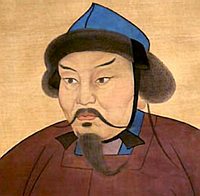 Following the prayer in the Moscow Cathedral Mosque during his visit in February 2010, the Hamas leader Khaled Mashaal admitted that in the Council of Muftis of Russia it felt like home. While it probably pleased the Russian leaders, in reality these words should have alerted them. Whether it was Mashaal’s intention or not, this acknowledgment could be perceived as a prophecy: the dawn of Islamic fundamentalism which illuminates the future of the northern superpower.

Islam is the second-largest religious denomination in Russia after the Orthodox Church. According to the official census there are about 15 million Muslims (10%); the Spiritual Board of Muslims mentions 20 millions. Most of the Muslims are concentrated in the North Caucasus (Chechens, Ingush people, etc.) and in the Volga region (Tatars, Bashkirs, Chuvash people, etc.). The natural growth of Muslims is traditionally higher than that of rest of the population. Mass migration from Central Asia and Azerbaijan led to the rapid growth of Muslim communities in large cities, especially in Moscow and St. Petersburg. The degree of religious self-consciousness among Muslims is much greater than one of the Christian majority.

Unlike in European countries, Islam was a natural component of the religious and national mosaic of Russia, but the relationship between the government and the Muslims has always been controversial. On the one hand, the Empress Catherine II patronized Islam by lifting restrictions on the construction of mosques; on the other, the ruthless conquest of the Caucasus by the Russian Empire in the mid 19th century led to the virtual genocide of the natives. This ambivalence remained under the Soviet regime as well.

The communists originally considered the Muslims natural allies against the Tsarist regime (the same way the multiculturalists see Islam as an ally in their fight against traditional and Christian values). Islamic places of worship were never subjected to mass destruction on such a scale as were churches and synagogues, and muftis were never repressed. The Muslim Autonomous Republics of Bashkiria, Tataria and Turkestan were established under the Communist regime. In October 1926 the muftis of Russia were eager to unite Muslims around the world in the sake of Communist revolution against “imperialism”. However, the subsequent Stalinist repressions, and especially the deportation of Chechens and Crimean Tatars, have left a deep scar in the hearts of Muslims.

In the 1970s the Brezhnev regime was more lenient towards the Muslims than towards Christians and Jews. They were allowed to publish the Quran, print lunar calendars, and open mosques. A magazine — Muslims of the Soviet East — emerged for sale to the general public.

The war in Afghanistan and the Islamic revolution in Iran were a turning point in the 1980s. Wahhabism, sponsored by Saudi Arabia, began to penetrate the Soviet Union. The Muslim youth were incited by Islamic militancy, and KGB repressions only fueled the rage against the atheist regime. Yeltsin and his entourage attempted to flirt with Islam, but without the desired effect. In August 1996 President of the Chechen Republic of Ichkeria, Zelimkhan Yandarbiyev, introduced Sharia law, which provided cruel punishment for adultery and the consumption of alcohol. Three years later, after the proclamation of an “Islamic Emirate” in Dagestan, the second Chechen war began.

The North Caucasus was subdued, Kadyrov’s clan was brought to power by the Kremlin, but nonetheless it was clear that the quiet period was only temporary. The problem wasn’t so much in terrorist attacks by separatists in Moscow and Dagestan, but in the popularity of Sharia state, Jihad and the “Caucasian Imamate” among intellectuals and spiritual leaders in the North Caucasus. Bans and repressions only enhance the influence of Wahhabism; adherents of traditional Islam and Sufis intimidate and bully.

Nowadays the waves of militant Islam have gushed far beyond the Caucasian Ridge, covering the entire European part of the country. Islamic extremism has taken deep root in the Muslim communities of two “capitals”: Moscow and St. Petersburg. In February, the Russian security services arrested three hundred Islamic radicals from the “Petersburg Jamaat”. A cell of Hizb ut-Tahrir with immigrants from Central Asia and Azerbaijan is very active, even in Siberia.

Militant Islam is rapidly infiltrating in the “soft underbelly” of Russia: the Volga region — the solar plexus of the country with such ancient Russian cities as Izhevsk, Cheboksary, Ufa, Penza, Saransk, and, of course, Kazan, the capital of Tatarstan — a major scientific and industrial center of the country. Until recently Tatarstan (or Tataria) was an integral part of Russia. The separatist sentiments were historically weak in this region, where Islam had an inherent religious and cultural character. Islam became the national religion of the Tatars in the 14th century, but the Tatars, like other nomadic tribes, never showed excessive religious zeal. Conquered by Ivan the Terrible in the 16th century, the Khanate of Kazan remained loyal to Russia.

The situation began to change dramatically in recent years. The pressure of nationalism combined with militant Islam cause recession of the Moderate Hanafi Islam. The Muslim Brotherhood (Ikhwan al-Muslimun), which includes Hamas, is increasing in power. Only after a blunt propaganda campaign by this movement using Yusuf al-Qaradawi’s ideas to kill Russian soldiers in Chechnya in February 2003, did Russia’s Supreme Court recognize the “Muslim Brotherhood” as illegitimate terrorist organization.

In 2012 Wahhabi terrorists murdered a moderate and tolerant imam, the well-known theologian Waliullah Yakupov, and tried to kill the Mufti of Tatarstan, Ildus Fayzov.

Recently, the Tatar Youth Union Azatlyk (Freedom) announced the year 2013 in Tatarstan as the “Year of Batu Khan” — the grandson of Genghis Khan and the ruler of the Golden Horde — who collected tribute from Russian cities in the 13th century. The Azatlyk promises to hold protest rallies “in honor of the burning down of Russian cities: Moscow, Ryazan, Suzdal, Vladimir, Kozelsk”(!). Batu Khan was a pagan who worshiped “the great blue sky”. His only “religion” was embezzlement and tribute collection from the conquered population. Suddenly “Batu Khan” becomes a “protector of Islam”. Azatlyk intends to distribute calendars, postcards and icons with the image of the founder of the Golden Horde in order, according to its leader Nail Nabiullin, to cause “Russia and Europe shiver from the sounds of horses’ hooves and whistling arrows of Tatar warriors.”

Protest rallies under the slogan “Tatarstan isn’t Russia” and “Suitcase, Railway Station, Russia” become ordinary in Kazan. The Russian language is ousted by the Tatar one. Abdullah — the self-proclaimed “Emir of Tatarstan” —issued a statement in which he claimed responsibility for killing two members of the FSB in Moscow and the bombing of the gas pipeline in a Moscow suburb. He threatens to eliminate Putin and carry out a series of terror attacks at strategic sites in Russia. The local Salafi leader Ramil Yunusov and activists of Hizb ut-Tahrir freely preach in Tatarstan.

Moreover, radical Islam is spreading in the Krasnodar and Stavropol regions between the North Caucasus and the Volga region. Last year Russia was shaken by a scandal over the demand of Muslim leaders in the Stavropol region to force Muslim schoolgirls to wear hijab in schools.

Radical Islam is penetrating into the heart of Russia, its ancient and primordial territories.

What does the Kremlin make of it? Nothing… Rather, as Churchill once said, it aims to “feed a crocodile hoping it will eat him last”.

13 thoughts on “The Green Banner of Batu Khan”