The following article concerns the blatant threats and intimidation aimed at “racists” by Norwegian “anti-fascists”. It’s worth noting that if Norwegian nationalists ever put up similar posters targeting, say, Muslims, the perpetrators would be rapidly tracked down, arrested, and prosecuted to the fullest extent of the law. As it is, all the Oslo authorities can manage is to intervene with a “dialogue group”.

Our Norwegian correspondent The Observer, who translated the article, includes this introduction:

This article from today’s Aftenposten concerns AFA-Norway and the ‘anti-fascist’ methods they rely upon to silence those that they don’t agree with politically. Their latest stunt is to distribute and hang posters outing a female member of the Norwegian Defence League (photo, full name, phone number and home address) in various locations in and around the inner eastern neighbourhoods of Oslo, where they ‘advise’ the young woman to leave the NDL so that they, AFA, can ‘leave her alone’ and presumably ‘focus’ on other NDL members.

The funny thing about AFA-Norway is that they only seem to target young female NDL members. In 2012 AFA ‘advised’ a young pregnant NDL member in Bergen (city on the west coast of Norway) to ‘think about her unborn baby’ and leave the Bergen branch of the NDL. In that particular letter they made it abundantly clear that they knew where she lived.

That AFA is willing to resort to violence is no big secret. They have done so on numerous occasions. Their Swedish thugs-in-arms managed, only a few days ago, to disrupt an SDL rally in Malmö. Apparently there were 700 AFA thugs against approximately 20 SDL activists, which in AFA-speak means even odds.

What a bunch of cowards!

The Anti-Racist Centre has apparently on their website included a link to the official Blitz (AFA affiliate) website, which is a little bit of a worry considering that the organization actually advices the police in Oslo on how to deal with multicultural offenders, as described in the article posted at GoV the other day. Here is the proof: as you can clearly see, the Anti-Racist Centre do link to the blitz website.

Here are some other articles about the radical left and the NDL:

Local “fascists” are being outed and threatened 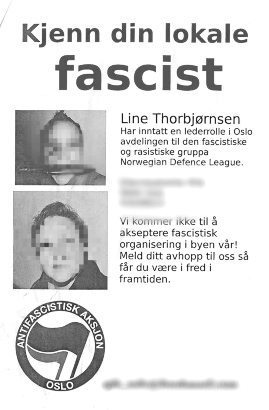 “This is very unpleasant and we have reported it to the police,” says Line Thorbjørnsen.

She has been a member of the controversial organization Norwegian Defence League (NDL) for about two years. She manages the Facebook page of the Oslo branch.

On the same day that NDL was scheduled to have a gathering in Oslo that Thorbjørnsen had helped to organize, dozens of posters were distributed and hung in and around her neighborhood by members of the organization Antifascistisk aksjon.

“Line Thorbjørnsen has taken on a leading role in the Oslo branch of the fascist and racist organization Norwegian Defence League,” the posters say. They also contain two pictures of her, as well as her home address and telephone number. She is also asked to notify AFA of her defection from NDL, “so that she can be left alone in the future.”

“Has no prominent position”

“I have no prominent position within the NDL, nor am I particularly active in the online debates. I manage the Facebook page of the NDL because I enjoy meeting like-minded people, and I am against Islam,” says Thorbjørnsen.

She has participated at rallies both at home and abroad organized by the NDL. The organization has been plagued by conflicts and frequent leadership changes. The PST informant Christian Høibø has been involved in the management from the start.

“I haven’t taken on an active role and I’ll be the first to admit that some of those who have tried to lead the organization have been rather comical figures. It has been very difficult to lead the NDL. It’s due to the reputation of the organization and the fact that we are constantly being targeted and attacked,” says Thorbjørnsen.

Antifascistisk aksjon has close links to the Blitz organization. It describes itself as “militant”, and is known for accepting violence as a legitimate tool in the fight against racism. The organization is the only one in Norway on the political left that is considered to be dangerous by the Oslo police.

The NDL was considered by Janne Kristiansen, former head of the PST,, a possible threat in 2011. Thorbjørnsen dismisses the claim that NDL is a violent organization.

“No, we just want to show our opposition to Islam through rallies and other legal ways of protest,” says Thorbjørnsen.

Aftenposten is aware that the dialogue group of the Oslo police has been in contact with individuals on both sides of the conflict following the poster incident in an attempt to convince the parties that such tactics should be avoided.

Aftenposten tried to get a comment from Antifascistisk aksjon, but they have not returned our calls.

The leader of Anti-Racist Centre, Kari Helene Partapuoli is of the opinion that such tactics are the last thing that is needed in the fight against racism.

“We don’t support it. It is more than sufficient to counter the information disseminated by the Norwegian Defence League. To name and shame people and publish their home address and phone number only escalates the conflict,” says Partapuoli.

“How would you describe AFA?”

She is worried about the “warlike rhetoric” characterizing the debate.

“The last thing we need in the fight against racism is violence. There is a lot of talk about a clash of civilizations coming from various organizations, including the NDL and SIAN (Stop the Islamization of Norway). It’s true that NDL rejects violence, but it is easy to justify the use of violence based on what their writings. Thus is not preferable for organizations involved in the fight against racism to intensify the rhetoric,” says Partapuoli.

Text on the poster (home address and phone number have been redacted):

We are not going to accept fascist organizations in our city. Notify us of your defection and we’ll leave you alone in the future.