As reported here early this morning, the United Nations Alliance of Civilizations met today in Vienna to… well, to do whatever it is alliances of civilizations do.

Actually, the goal of this Alliance is quite clear, even if it is not stated explicitly: to impose the will of the United Nations on all Western countries, especially those that have not yet implemented laws against “defamation of religions” as demanded by the Organization of Islamic Cooperation.

We are approaching endgame in the OIC’s long march through the major international institutions of Western culture. It began with the announcement in 2005 of the ten-year plan to end Islamophobia in the West, and the establishment of the Islamophobia Observatory shortly thereafter. These were obviously not enough to meet the Ummah’s needs, so it shifted its focus to other institutions. The OSCE must have also proved disappointing, as it is not high-profile and offers no prominent global platform.

The OIC has had better success with the General Assembly of the United Nations, taking virtual control of the organization by means of the votes of its 56 member states (57 if you count “Palestine”). However, this too is insufficient from the point of view of the embryonic World Caliphate. To establish full control, a permanent seat on the Security Council is an absolute necessity. The would-be Caliph — Recep Tayyip Erdogan, who obviously aspires to an office higher than prime minister of Turkey — has made it clear that Islam must be granted such a seat.

The process now unfolding before us on the international scene mirrors the “Civilization Jihad” launched long ago by the Muslim Brotherhood in the United States. With the installation of Chuck Hagel as Secretary of Defense, the Ikhwan has now positioned all its American pieces on the board in preparation for the final takedown of Israel. To secure their international geopolitical position, the Brothers and the OIC need to complete their takeover of the United Nations.

Today it seems they are very close to achieving success in — what shall we call their operation?

Perhaps the “Alliance of Civilization Jihad” would be most fitting.

Henrik Ræder Clausen and Elisabeth Sabaditsch-Wolff were in Vienna to attend and report on today’s event, the 5th Global Forum — UN Alliance of Civilizations. Elisabeth sent the account below, which includes some of Henrik’s material.

The Clash of Tectonic Plates
by Elisabeth Sabaditsch-Wolff

There was a big media campaign in Austria in advance of today’s Global Forum of the United Nations Alliance of Civilizations (UNAOC) in Vienna. The minister of foreign affairs touted the event, and the government took out full-page ads on Sunday in all the major the major Austrian newspapers.

Today’s forum was not like the OSCE — there were no NGOs or organizations from civil society. Only state representatives of individual countries and United Nations officials were invited to participate at the podium.

The presenter who opened the morning’s events was a very good-looking woman from the Al-Jazeera network in Qatar. She spoke flawless English when she introduced the new high representative of the Alliance of Civilizations, Nassir Abdulaziz Al-Nasser — who is also from Qatar. Afterwards she told the assembly:

“The influence of Qatar reaches way beyond its borders.”

And indeed it does. No one should forget that for almost five decades Qatar was the residence-in-exile of the Egyptian cleric Yusuf al-Qaradawi, the leader of the Muslim Brotherhood. 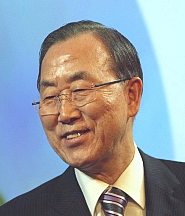 A series of world leaders, among them UN Secretary General Ban Ki-moon, gave speeches for the occasion. Vuk Jeremic, the president of the General Assembly of the United Nations, also addressed the audience. He quoted both the Koran and the Bible, reciting a verse from the Koran stating that Allah created everyone equal, and then gave his interpretation:

“This directs us to live in harmony, since we have a common lineage.”

The theme of the meeting was “We Need Responsible Leadership”. Human rights were not on the agenda, and were mentioned only twice in the main speeches in the plenary. There was no real discussion.

One of the functions of today’s event was to honor Jorge Sampaio of Portugal, the outgoing high representative of the UNAOC, and to welcome the Qatari Nassir Al-Nasser, who is replacing him.

In his address Mr. Sampaio spoke of the successes of the Alliance, but never mentioned any of them specifically. Mr. Al-Nasser told his listeners that a “diversity of culture leads to a diversity of knowledge.” He and other speakers decried the persistence in the world of discrimination, intolerance, and xenophobia.

Such was the substance of this momentous event in Vienna. My report could easily have been scribbled on a 3×5 card and filed away for posterity, were it not for the participation of Turkish Prime Minister Recep Tayyip Erdogan. 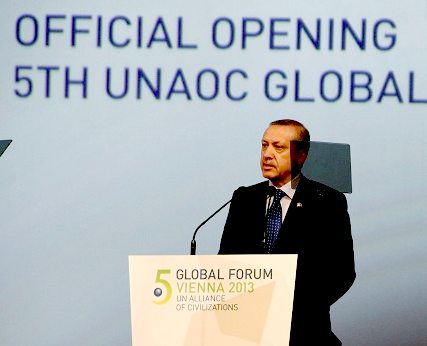 Mr. Erdogan was treated like a rock star. He was the main attraction of the event, and a substantial presence from the Turkish media guaranteed that he would be featured in news reports at home. His manner, his bearing, his oratory, and his arrogant self-assurance reminded me of — dare I say it? — Adolf Hitler. He obviously knew that he was the Man of the Moment.

Mr. Erdogan described the current world situation as “the Muslim tectonic plate versus the Western tectonic plate.” I wondered, how does this fit in with an “Alliance of Civilizations”? It sounded more like the “Clash” to me, the very conflict that this organization was allegedly founded to prevent.

Later on, at the press conference, Mr. Erdogan went on record stating that Turkey provides the Syrian rebels with “every kind of support”, all the while lamenting that 70,000 are dead and the West is not doing enough.

So he is not being at all bashful about his view of Turkey’s new prominence in Middle Eastern affairs.

And not just in the Middle East — he has his sights set on Europe and the United Nations, too, which is why he came to Vienna to bestow his wisdom on a rapt audience. One of his most important tasks was to demand a full seat “for religions” on the UN Security Council.

I am making an appeal to the world. Does the Security Council represent the whole world?

No, the world is not represented by the Security Council.

And do they represent all religious groups? This is the fundamental problem.

Religions are not represented on the Security Council.

17 thoughts on “The Alliance of Civilization Jihad”