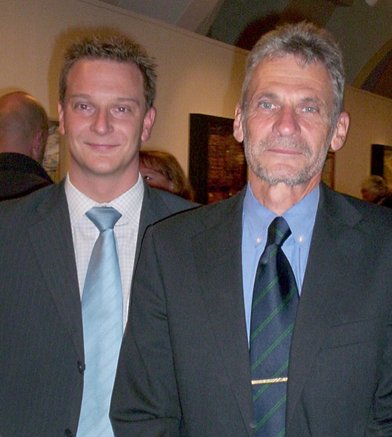 Long-time readers will remember Bart Debie, the member of Vlaams Belang who was in the news back in 2006 and 2007 after he was arrested for his “Islamophobia”. Today he revealed in a newspaper interview that back in those days he was working as an agent for State Security within Vlaams Belang.

I spent a few days in Bart’s company back in October 2007, and will always think highly of him, regardless of who he was working for. He was of great assistance to us in our conference — in fact, one might say that without Bart Debie’s help, the European Counterjihad would not exist.

He was helpful to other allies, too — including Luk Van Nieuwenhuysen, the man in the photo above. On September 11, 2007, Bart helped Luk and others escape from a police van after their arrest.

So, regardless of where your real sympathies lie: Thank you, Bart Debie.

The following open letter to Bart was published today at the International Civil Liberties Alliance Website:

ICLA Thanks Bart Debie For His Invaluable Assistance

The International Civil Liberties Alliance (ICLA) held its first major event in the European Parliament on 18 October 2007. We gained access to this important venue thanks to the sponsorship of Vlaams Belang, a political party that is well represented in both the European and Belgian parliaments. The conference would not have been possible without the tireless efforts on the ground in Brussels of former commissioner of Antwerp police Bart Debie. His efforts were significant and indeed invaluable on both 18 October and on the second day of the conference that took place in the Flemish Parliament.

It was therefore with amusement that this morning we read in the Belgian Newspaper De Standaard that Bart was actually a mole within Vlaams Belang working for Belgian State Security in 2007. We would like use the public revelation of this information as an opportunity to thank him for his work for our organization.

We coordinated closely with Debie for a few months prior to the conference and then again on the two days of the conference itself. We developed an excellent working relationship with him, and those who worked with him found him practical, helpful, and entirely professional.

In our view, his work for the security services did not conflict in any way with his efforts on our behalf. Indeed having such connections probably enhanced his ability to help us with our work. We are grateful for any help that the Belgian state gave to us via Debie to make our event the success that it turned out to be. Doors were undoubtedly opened on our behalf. Through Debie, the Belgian state helped our conference run efficiently and helped us overcome our own inexperience at that time in organising these kinds of events. We hope that many of the policy ideas that we developed at the conference are of use to the Belgian government.

Our organisation would probably never have got off the ground if that event had been a failure. Every year since we have had an annual conference in various European countries. We returned to the European Parliament for the second time for another successful conference, with a larger attendance, in 2012.

It was at the 2012 conference that we launched an initiative called the Brussels Declaration To Safeguard Individual Liberties And Human Rights. This is an important human rights document that asks governments to be accountable to the United Nations Universal Declaration of Human Rights.

The 2007 conference that Bart helped us with was also the catalyst for our becoming involved in our regular work at the Organisation for Security and Cooperation in Europe (OSCE) meetings that take place in Vienna and Warsaw. While at the OSCE we have made important interventions about women’s rights, civil liberties, and human rights in general. Our work educating policy-makers and the general public on the threat of shariah doctrine to human rights and civil liberties continues to expand, and to become both more professional and more effective.

We are gratified that Vlaams Belang, the Belgian State Intelligence, and the civil liberties movement opposing shariah doctrine can agree on at least one thing: the good nature and competence of Bart Debie. And again thanks to Mr Debie and the Belgian Government for their help and assistance in moving a fledgling citizen’s movement concerned about Islamisation, into the mainstream of political discourse on civil liberties and human rights.

5 thoughts on “Thank You, Bart Debie”