When Rupert Murdoch is referred to as a “news mogul”, the person employing the term probably doesn’t realize that the word “mogul” is derived from the name of the Islamic conquerors of India.

“Moghul” or “Mughal” comes from a Persian word meaning “Mongol”. It was the Persians’ description of the Central Asian conquerors of Persia, whose hordes were the descendants of Genghis Khan and Tamerlaine. The Moghuls overran Persia, adopted Islam, became Persianized, and invaded the Indian subcontinent to slaughter the infidels there in the name of Allah.

The Moghul invasion of India began early in the 16th century and advanced steadily across the subcontinent until the British arrived in the early 18th century and put a stop to the expansion. The British did not object to Islam per se — and they were shrewd at encouraging the Hindus and Muslims against each other to facilitate their own rule — but the spread of Islam in India by warfare was halted by the British presence until they left in 1947.

The successful Moghul invasion of India was the second attempt to conquer the subcontinent for Islam. The first one was undertaken by the Arabs under the Umayyad Caliphate in the early 8th century. After a quarter of a century of warfare and destruction, the Arab invaders were driven back to the west of the Indus River. In later centuries the hosts of Mohammed made sporadic attempts to conquer the Hindus, but enjoyed no lasting success until the Moghul invasion eight hundred years later. Had it not been for the arrival of the British, the whole of the Indian subcontinent would likely have been Islamized, with Hinduism eradicated within Islamic territory, just as Buddhism had been before it. 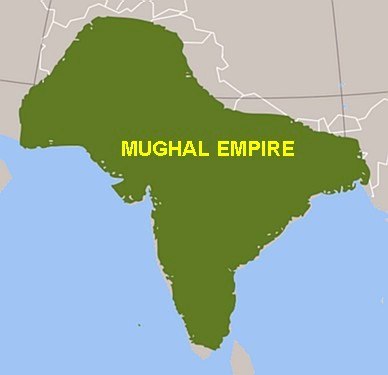 The Hindu genocide at the hands of Islam lasted more than a thousand years, and continues in a reduced fashion to this day. It is the largest genocide in recorded history, with many millions of Hindus — possibly over a hundred million — slaughtered by the Muslim invaders, and countless millions more enslaved or forcibly converted to Islam. The sheer wanton destruction wielded by the Islamic conquest staggers the mind — the opulent flower of Hindu civilization was simply wiped out, with idols broken and burned, temples razed, and untold quantities of exquisite artifacts destroyed or melted down for their precious metals. Although it guttered, the flame of Hindu learning was never fully extinguished, but only after the arrival of the Pax Britannica did Hindu scholars regain the ability to realize their intellectual potential.

Such is the legacy of Islam in India. Like al-Andalus, the Moghul Empire is said to have enjoyed a “golden age”, when ethnic and religious harmony reigned. The 17th century is characterized as a period when art and architecture flowered under the Moghuls, but, as in Spain, Islamic culture in India was really just a derivative afterglow drawing on the remnants of what went before, a dim reflection of the lambent Hindu splendor that had preceded it.

A movement has recently emerged in India to restore the northern portion of the Mughal Empire in the form of an entity known as “Mughalistan” (or “Mughalstan”, depending on who is spelling it).

When India gained its independence from Britain in 1947, it was partitioned into two states, an Islamic one and a multi-religious one that was predominantly Hindu. The largest concentrations of Muslims were in East Bengal and what is now Pakistan, in Baluchistan and portions of Sindh, Kashmir, and the Punjab. These two regions, separated by a wide stretch of Hindu India, became East and West Pakistan respectively. In the early 1970s a civil war erupted between the two, resulting in the formation of Bangladesh out of what had been East Pakistan.

Before the partition of India, Indian Muslims had pushed for a corridor across northern India that would connect the two halves of the new Islamic state. However, the Muslim population in those regions was not considered sufficient to warrant its inclusion, and the corridor never materialized.

Now, more than sixty years later, the idea of an Islamic corridor has returned. In the intervening decades the Muslim portion of India, as everywhere else, has increased relative to the non-Muslim population. Devout Muslims in the subcontinent have refloated the idea of a corridor connecting Pakistan and Bangladesh. It would include heavily Muslim regions in Northern India, southern Nepal, and coastal Burma. The proposed name for resulting Islamic superstate would be “Mughalistan”, echoing the glory of the Moghul Empire before the arrival of the British.

The Mughalistan movement has a long-term goal that includes much more of India than just a northern corridor. Thanks to their fecund demographics, Muslims are now a much larger proportion of the population across swathes of central India, including the Hyderabad region where the recent terror attacks took place.

As Terresa Monroe-Hamilton writes in The Noisy Room:

An Islamic Coup in India — Mughalistan

Yesterday, I received word of some horrible bombings by Islamic militants in India. 13 were killed and 70 were injured. Not a peep of this on the news. Islam is cutting a bloody swath across the planet and the media is giving us shiny things to chase after as distractions. So much for Peace be Upon Him and all that. Jihadists are murdering innocent Hindus and no one seems to care.

Then, even more comes to light as 4 are killed in Bangladesh in a violent ‘Bloggers Riot‘…

And while the world turns a blind eye to the bloody massacres in India, the Mughalistan Project takes shape. It is the Islamic Pakistan-Bangladesh plan to split India. The plan is being billed as Mughalistan — An undivided Islamic nation in the Indian Subcontinent. Pakistan and Bangladesh would be connected through a land corridor running across the Indo-Gangetic plain, the heartland of India.

In 1947, India was partitioned into two countries based on religion — India for Hindus and Pakistan for Muslims. Pakistan had two parts to it — West and East. West is now Pakistan, East is now Bangladesh. The Bangladesh Liberation War in 1971 occurred and a declaration of independence was made. Muslims wanted a corridor between the two countries in 1947 to unite the country and now want it again to ensure that Bangladesh becomes Islamic. For a full explanation of this Project, read here.

Islam has totally infiltrated India. India has 29 member states and 7 union territories. Kashmir now has a population that is 97% Muslim. This has happened by highly aggressive conversions, marriages and brutal violence. Muslims now own around 100 districts in India and what they don’t own, they are now trying to take by converting owners to Islam, by using violence to drive the Hindus out or by outright theft.

In West Bengal, out of their 19 districts, 5 are now Muslim and the takeover is growing rapidly. Islam composes 40% of the population there now. In Assam, out of their 21 districts, 8 are now a Muslim majority. There are thousands of no-go areas — these are areas that only Muslims may venture into and where sharia law rules. In Uttar Pradesh, the largest state in India, the Islamic population is now 25%. In Bihar, it is 20%. Kerala — 30%. And in Jammu, it is 40%. These are the most violent territories and it is spreading like wildfire. These numbers were given to me by others living in India. In the US, we are worried about Mosques and Madrassas. In India, their entire country is being invaded; converting hundreds of Hindus every day by force and the rape of Hindu women is commonplace.

According to the last census in India, the Muslim population was 13.4%. My sources tell me it is actually closer to 35%.

If Mughalistan becomes a reality (and it looks like it is well on its way to being one), it will be the largest Islamic Republic on the planet and it will take the whole of eastern, northeastern and northern India as part of its domain. Mughalistan will be an independent homeland for the Muslims of India and it will become part of the upcoming caliphate.

Read the rest at The Noisy Room.

22 thoughts on “Make Way For Mughalistan”