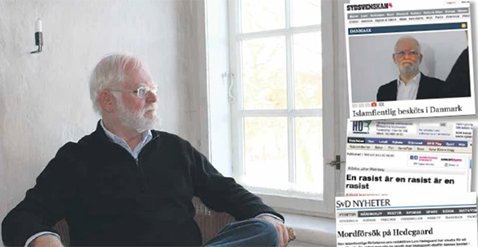 The treatment by the Swedish media of last week’s assassination attempt against Lars Hedegaard was, shall we say, less than fair and balanced. Typical descriptions of Lars included “enemy of Islam” and “convicted racist”.

The last of these terms is verifiably false. As a result, Lars Hedegaard has lodged a libel complaint with both the Press Ombudsman and the Chancellor of Justice in Sweden. Maria Celander has the report in Dispatch International:

The February 5th assassination attempt on Lars Hedegaard, editor-in-chief of Dispatch International, was reported all over the world. There was a remarkable difference, however, between the way in which the Swedish media and international media handled the news. While international media systematically called Hedegaard “an Islam-critic”, or even “prominent Islam-critic”, Swedish media chose just as systematically to use the loaded term “enemy of Islam”.

“Lars Hedegaard, once convicted for racism, has been subject to an assassination attempt. An unknown man reportedly shot at Hedegaard outside his Copenhagen home.

“The author Hedegaard is one of the few Danes who is a certified racist, as he some years ago was fined by a High Court for having stated in a blog interview that Muslim fathers rape their children. He was later acquitted by the Supreme Court.”

The truth is that no conviction of Lars Hedegaard was upheld. The charges under to the Danish “racism clause” were rejected without dissent by the Supreme Court, which thus invalidated the High Court conviction.

“Writing in this way as if the conviction were final is nothing but an outright lie. The only existing conviction is an acquittal,” states the journalist and expert on freedom of press Nils Funcke.

Lars Hedegaard never received any “racist certificate”. No court ever said anything to that effect in any verdict. For that reason, Hedegaard has now chosen to report several Swedish media, including Aftonbladet, Svenska Dagbladet, Sveriges Television, Sydsvenskan and Helsingborgs Dagblad, for libel. This charge has been filed with Allmänhetens Pressombudsman, (the Press Ombudsman) as well as the Chancellor of Justice.

“After several years of misuse, the word ‘racist’ means nothing more than a person considered by the rulers to be a threat to their power, and whom they thus persecute by all means possible. Being called ‘racist’ in Sweden today is similar to being branded an ‘outlaw’ during the Middle Ages — a person standing outside the protection of the law, and whom one can thus freely lie about, assault and even kill,” says Lars Hedegaard.

In the filing, Hedegaard in particular points out an opinion piece in Helsingborgs Dagblad, written by Johan Malmberg and published on February 7th:

“Even a rabid racist like Hedegaard, founder of the Danish Free Press Society and editor of the Muslim-hating newspaper Dispatch International, is obviously also covered by democratic principles, just like everyone else,” writes Malmberg, who then proceeds to explain why Swedish media should not be neutral when reporting on Hedegaard:

“A man who claims that Muslims rape their children and try to take over the world may want to be considered merely an ‘Islam-critic’. But what he truly is, is of course an enemy of Islam, hostile to foreigners, and racist.”

That Lars Hedegaard never asserted any of the above is simply ignored. In his filing to the Chancellor of Justice, Hedegaard writes:

“The entire article is mudslinging and defamation of my good name. I desire that the Chancellor act effectively against this campaign of libel and mudslinging. Swedish media long ago crossed the limits of decency, and publication of these have caused me great harm and discomfort”

It might be difficult, however, to make the Chancellor take up the case, thinks Nils Funcke. The general rule is that defamation charges are private cases, a rule that is deviated from only rarely, perhaps once a decade, Funcke estimates.

“The prospects of winning at the Press Ombudsman are significantly better, in that a person has been falsely depicted as a criminal,” he says.

Read the rest at Dispatch International.

For previous posts on the assassination attempt, see the Lars Hedegaard page.

7 thoughts on “Lars Hedegaard Will Sue The Swedish Media”