Enza Ferreri’s latest essay concerns the Islamization of Britain, as observed from where she lives in West London. 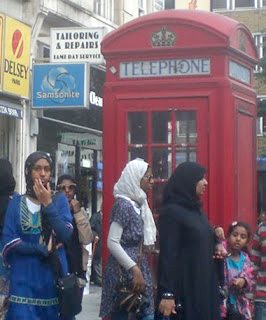 Islam in the UK
by Enza Ferreri

This is the view from Londonistan, Absurd Britannia, Eurabia.

Raymond Ibrahim, a scholar of Arab and Islam history born in the USA of Egyptian Coptic parents, often writes about the condition of Christians in Muslim-majority countries, where they are subjugated and oppressed, even when they are a sizeable minority in places like Egypt, Syria and, before the “ethnic cleansing”, Iraq.

This is the complementary view, the one from historically Christian Western Europe, where Muslims are still (although not for long) a small minority, smaller than the Christians in the aforementioned countries. Even in these entirely different situations Muslims, aided by the Left and coward governments, are still acting like masters, thinking that everything is due to them and trying to impose their ideology on everybody else.

I came to live in London from Italy in 1984, and the changes I witnessed since then are earth-shattering.

When I first arrived here, the word “halal” was unknown to everybody except the people involved in animal welfare, who knew that the Islamic method of slaughter was bad news indeed for the animals. Now you only have to take a 30-minute drive around London (any part) and you’ll see dozens of Halal signs in shops and restaurants. In the area where I live in West London, which is by no means a Muslim ghetto because many non-Muslim whites and blacks reside here, in the street you see women whose attire would make the strictest Taliban happy — or at least you think they must be women, since all you can see is a walking robe with no eyes.

The following are some among the myriad examples of Muslim intolerance and lack of integration, stealth jihad and creeping sharia in the United Kingdom.

A few years ago a Muslim policeman refused to wear his uniform due to the presence of a cross on it.

The typical phenomenon of Muslim men grooming young white girls, for years denounced only by right-wing groups who as a result were accused of racism and Islamophobia, turned out to be real and now the mainstream media have started covering it.

There have been instances of Muslim girls rejecting their school uniform and demanding to wear Muslim clothing, sometimes even suing the school using the European Convention on Human Rights and winning the case.

Muslim bus and taxi drivers have not allowed blind people in their vehicles with their “unclean” guide dogs, and Muslim passengers have objected to them.

British legislation, bending over backwards to accommodate Sharia, has permitted conflicts and contradictions with long-established jurisprudence. Polygamy, despite being forbidden by British law, is now de facto part of it due to a change in the inheritance law which lets multiple wives inherit from their husband.

Similarly, a loophole created by the previous Labour government allows Muslims to take a property mortgage without paying interest, which also makes it cheaper for them and has now been exploited by non-Muslims who discovered it, causing a minor uproar.

In the UK the police are afraid of Muslims. There have been cases caught on video of Muslim demonstrators pelting the police with sticks and traffic cones and taunting them with shouts of “kuffar” (Islamic epithet for infidels), as the police retreated in front of their tormentors.

And then there is the classical problem of halal meat, which is being served in British schools, hospitals and other institutions to both followers and non-followers of Islam, and brought to international attention when former President Sarkozy declared his intention to change this situation in France, which is in the same predicament as the UK, but maybe a bit less dhimmi. In addition, the meat of animals slaughtered with the halal method but still discarded for Muslim consumption because considered “haram” (forbidden) in some other way is being sold to unaware non-Muslims. To their credit British ministers, however, following Sarkozy’s example, said last year that they would change the law.

Practically, according to a familiar pattern of progression, Muslim populations in countries where they are a tiny minority or in a weak position act differently from their counterparts in countries where they are stronger or more numerous. Therefore Europe, with its policy of appeasement and its Muslim communities’ exponential growth, can expect in a few decades’ time to see the imposition of Sharia law and other effects of Islamic supremacy, unless something (hopefully, Europeans waking up from their sleep) intervenes to alter the current demographic, social and political trend.

Western Europe’s general readiness in recent years to discard Christianity may reveal itself to be a very dangerous experiment indeed for many different reasons, one of which has been to deprive itself of a solid bulwark against Islam, stronger than atheism, secularism or liberalism both in the American and traditional European sense.

It is no coincidence that the country that has perhaps conceded the most to Muslims and has renounced the most for the sake of Islam, the United Kingdom, possibly the only country in the free world where the media, with the exception of a Welsh student rag and a Welsh-language church newspaper, did not reprint the notorious Mohammed cartoons for fear of offending Muslim sensitivities, is also the country which is proudest of its secularism, the only country I know of where before his visit the Pope was threatened with arrest by various fanatical atheists, homosexual activists and assorted militant hotheads.