Alain Wagner, the director of the International Civil Liberties Alliance (ICLA), posted the following essay today at the ICLA website. It was translated from the original French version by the author. 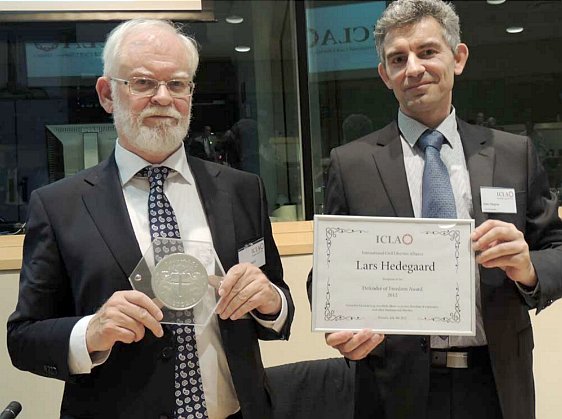 How many deaths will it take before we understand?

I reacted not with surprise but with anger when I learned just now about the assassination attempt on Lars Hedegaard.

Lars Hedegaard, to whom I gave the Defenders of Freedom Award in the European Parliament of Brussels last July on behalf of the International Civil Liberties Alliance.

Lars Hedegaard, a Danish journalist, a defender of freedom of expression and human rights like myself and many others, a fierce opponent of Sharia and of the Muslim Brotherhood and the Salafists’ freedom-killing Islam.

Without any surprise, as I said, because — let’s remind people again — murder of those who criticize Islam is prescribed by all the Sharia law books in the world, including those which circulate freely in all our countries.

But with anger, because if Lars Hedegaard survived it is not because our tolerant and democratic countries are able to protect their citizens who express themselves and denounce the barbaric and dangerous promoters of Sharia, the Islamic ideology but because the assassin’s weapon jammed after the first missed shot!

Sharia, the “Islamic law” which is taught with perfect impunity in all mosques, including the one on your local street corner, has for centuries killed Eastern Christians, Jews, Hindus, Buddhists and other non-Muslims. Sharia injects the poison of contempt and hatred of “unbelievers” in the minds of its followers. It has been the direct and indirect cause of misery, oppression, slavery and economic failure in all the “Muslim countries” since the advent of Islam 14 centuries ago and until today.

Followers of Sharia — whether those killing Muslims democrats and Copts in Egypt, or those working with determination for the end of freedom of expression and the progressive subversion of our democracy through the dissemination of a politico-religious ideology promoting and legalizing violence — are a real danger.

Those in Europe who dare speak the truth — which is so obvious — are routinely pilloried as “Islamophobes” by ignorant or self-interested advocates of political correctness. Today one of those who tries to warn our society of the dangers of political Islam has, by a miracle, just escaped death, but others like Theo van Gogh were not so lucky.

So the question is: how many deaths will it take before we understand and act?

5 thoughts on “How Many Deaths?”