Pictured below are the front and back of a virtual t-shirt, one that is not yet in production: 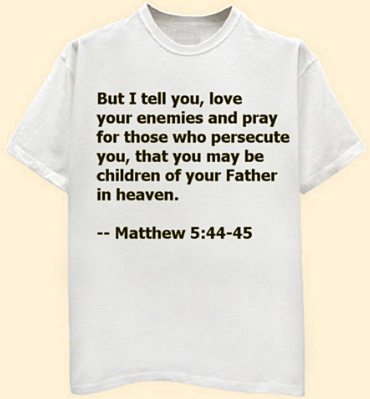 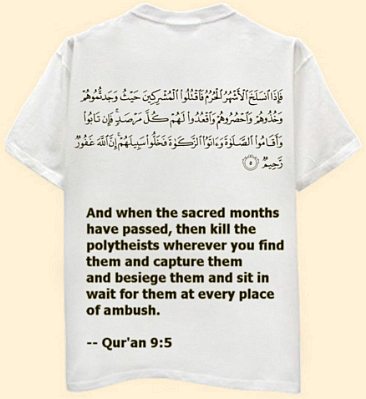 The idea for this shirt occurred to me after the events at the Dearborn Arab International Festival over several successive years. One such incident was the arrest of David Wood and his associates at the 2010 Festival, for handing out Christian literature on a street corner. The most recent one was this past summer, when a group of Christians — after having eggs, bottles, and pieces of concrete thrown at them — were advised to leave the Festival by the police, or face being arrested.

These incidents were evidence of the de facto rule of Islamic law in an area of the United States where Muslims are in the majority. However, they were problematic in some ways, including the fact that last summer’s Christian activists carried a pig’s head on a pole — a fact that was not recorded in their own video of the incident. From a pragmatic point of view, such provocation is not helpful to the anti-sharia resistance — no one who is undecided on the issue of Islam or largely uninformed about it will be convinced to oppose the spread of Islamic law by Christians carrying pigs’ heads.

The Dearborn T-Shirt Project was conceived as an entirely non-provocative alternative to more confrontational street theater in areas where Muslims dominate. The wearer of the shirt would do nothing more than that — simply wear the shirt. His action would create a streamlined test of the extent to which sharia is now the law of the land in Dearborn and other Muslim areas where the Constitution has been discarded in favor of Islamic law.

My original plan was to undertake this project myself, with the help of one or more assistants to record on video whatever might eventuate on the streets of Dearborn. However, several considerations made me change my mind. The first was financial: the cost of getting to and from Michigan, accommodation there, paying for any necessary hospital treatment, putting up bail money, and the inevitable legal expenses for a possibly protracted aftermath of litigation. Yes, it’s quite likely that a civil liberties non-profit would take up any case mounted against me. However, my status as an obscure and indigent blogger (whose main focus is actually on Europe) makes me reluctant to take a gamble on such an eventuality.

The second factor was the deciding one: my wife. Dymphna, as regular readers know, suffers from fibromyalgia and complex chronic post-traumatic stress disorder. She would be unable to take the stress associated with such an action on my part, especially since it might involve an indefinite absence from home. She prevailed upon me to forego the idea, and instead hand it over to the larger Counterjihad through the medium of our readers.

Anyone who decides to undertake the Dearborn T-Shirt Project is advised to keep in mind a few important considerations that will help make his action more effective:

If you say anything spontaneously, limit it to a repetition of the Bible and Koran verses printed on your shirt. If you are asked questions, respond in a non-committal fashion. Utter nothing but pleasant platitudes about Islam. Practice a relaxed smile in the face of intrusive remarks.

The best way to respond to angry questions is with questions of your own, spoken in a mild, friendly, and interested tone. Some examples:

You get the idea: no attacks on Islam; no reproach or accusation. You exhibit manifestly Christian behavior, and respond to questions with polite inquiries.

It may be better for a woman to wear the t-shirt, since a woman is usually considered less threatening than a man. Muslims may hold a woman in contempt, but they are less likely to consider her presence a direct physical provocation.

2. Take along a video camera.

It’s crucial to record what happens for later propagation on the Internet. It may be that you will be welcomed and treated kindly, but you will more likely experience some sort of harassment, and even violence. Your assistant or assistants can record these reactions for posterity.

Unfortunately, the incident involving David Wood’s group back in 2010 shows that the police in some cases will ignore your First Amendment rights by stopping you from taping and taking away your camera. However, it’s important to make the attempt.

Bear in mind that if you are attacked and humiliated, some of the “youths” nearby will be overjoyed and gleeful. They may well record your ordeal on their cell phones and then post it themselves. So there is a very good chance that a video will be propagated, regardless of the behavior of the police.

3. Don’t carry any “Islamophobic” material on your person.

No Turban Bomb. No “Mohammed as a pig” cartoons. No copies of books by Bat Ye’or or Robert Spencer.

If I were doing this, I would not carry a Bible or Christian literature of any kind. Just my driver’s license, my car keys, and contact information for my next of kin.

The shirt should say it all.

The purpose of the Dearborn T-Shirt Project is to create the best possible instance of peaceful, orderly, lawful behavior that may also violate sharia. The two texts on the shirt — as diametrically opposed as any two excerpts from scripture can be — are quotes from religious works that are accepted as authentic by their respective followers.

The Koranic verse may be found in any copy of the Koran sold or given away at those da’wa tables at the Dearborn Arab International Festival. It is recited in mosques and discussed by Islamic clerics in their Friday sermons. From a non-Muslim point of view, there is nothing wrong with displaying it on the shirt. But from a sharia perspective, it constitutes Islamic slander, because it damages the cause of Islam.

I have discussed this aspect of Islamic law a number of times in the past, most recently as it pertains to the Mohammed movie and Terry Jones. Steve Coughlin’s presentation on the issue is comprehensive.

The Dearborn T-Shirt Project is designed to test how far the enforcement of sharia has proceeded in the United States.

If the wearer of the shirt is harassed or injured, sharia is being informally enforced by Muslims who are confident they can act with impunity.

If he is made to leave the festival or is arrested by the police, sharia has become official state policy at the local level.

If he is convicted in a court of law, and his conviction is upheld, then sharia is now the law of the land.

Whatever the outcome may be, publicizing the occasion will be good for our movement. Unlike the pig’s head on a pole — which would tend to turn undecided secular people against Christians and in favor of Muslims — the wearer of the Dearborn T-Shirt would appear to be clearly harmless and without blame in the eyes of anyone who is not a Muslim or a leftist dhimmi.

The t-shirt has the potential to capture a portion of the middle of the road, which is what the Counterjihad sorely needs.

The strategy outlined above is still completely legal in the United States, at least in theory, and it may also be marginally legal in Britain. However, there are precedents from Australia and Canada that seem to indicate that non-Muslims who recite or display verses from the Koran may be liable for “inciting religious hatred”, regardless of the authenticity of the verses. And numerous European countries may also prosecute a wearer of the shirt if Muslims raise a stink about it.

So this operation carries a lot of risk, and should be undertaken only with a full measure of caution, and a sober awareness of the likely outcome.

Below are a couple of verses from the Koran that may come in handy (both from the Sahih International edition):

Fight those who do not believe in Allah or in the Last Day and who do not consider unlawful what Allah and His Messenger have made unlawful and who do not adopt the religion of truth from those who were given the Scripture – [fight] until they give the jizyah willingly while they are humbled.

And when the sacred months have passed, then kill the polytheists wherever you find them and capture them and besiege them and sit in wait for them at every place of ambush.

And their counterpoint, from the New Testament:

But I tell you, love your enemies and pray for those who persecute you, that you may be children of your Father in heaven.

But to you who are listening I say: Love your enemies, do good to those who hate you, bless those who curse you, pray for those who mistreat you.

12 thoughts on “The Dearborn T-Shirt Project”