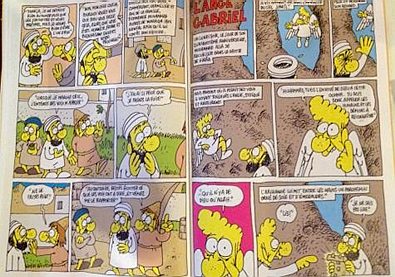 The French satirical magazine Charlie Hebdo has done it again: it has published cartoon images of the prophet Mohammed.

This time there are no jokes, unless you count those silly faces on the people and the camels as jokes. Mohammed is treated soberly, and with great respect. No lewdness. No fart jokes. No genitalia.

And no slander! Just the facts, ma’am.

Whether the Mohammed comic book will earn a fatwa remains to be seen. For those who are interested, the comic may be purchased at the online shop for Charlie Hebdo.

Many thanks to Hermes for translating the description on that page:

Life of Mohammed — Part one: The early days of a prophet

Who has a view of Mohammed? Everybody. He is the prophet of Muslims, of course, but for others he is a historical figure or a legend. One can make a cartoon about Muhammad as one can about Jesus or Napoleon or Zorro.

When Muhammad is depicted in cartoons at Charlie (Hebdo), we caricature mainly the vision which extremists have of him, or we take on Muhammad in order to contrast him with Muslim radicals. In any case, it is the vision of religious fanatics which determines the way we see Muhammad. We must tell the truth: we do not know Muhammad. In the West, everybody can quote episodes from the life of Jesus, but who can do the same about an episode from the life of Muhammad? Is this normal in a country like France, where Islam is presented as the second religion?

We have drawn the life of Muhammad as told by the Muslim chroniclers. No humor added. The way it has been done may appear blasphemous to some, but the core is perfectly halal.

Hermes adds this excerpt from the page of the comic, as shown in miniature at the top of this post:

Bottom right panel (the other texts are too blurred):

7 thoughts on “Is This Blasphemy?”