More than forty years ago, when I was in high school, I lived in the region of England described in the following book review by Ivan Winters. In those days it was called the West Riding of Yorkshire, although the redesigners of Britain have since torn up and replaced the ancient structure of England, and it is now known as West Yorkshire or North Yorkshire, depending on the exact location.

I lived in Harrogate, which is not far north of Leeds, but might as well be on a different continent, given the intensive cultural enrichment that has enveloped Leeds, Bradford, Wakefield, Keighley, and Sheffield in the more than four decades since I used to visit those places. In the interim all the old industrial cities of the West Riding have largely been converted to Pakistani outposts, a process that was only just beginning during the mid-1960s.

The Islamic Republic of Dewsbury describes the gritty reality of recent events in that part of Yorkshire. A slightly different version of this review has appeared previously on the blog ‘Musings of a Durotrigan’. 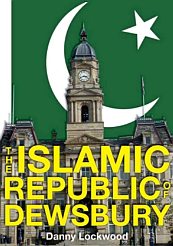 The Islamic Republic of Dewsbury is a very interesting book which reaches some interesting conclusions, although not necessarily the conclusions that readers of this review might expect. Two things come through immediately upon reading this book. The first is Danny Lockwood’s intimate knowledge of Dewsbury, and the second is his own personality. Whenever people or places in the area are mentioned, Danny is encyclopedic in his knowledge and often offers interesting historical background. This contributed to my good opinion of this book, as some of the people and places mentioned are also known to me.

Two obvious examples: First, his references to a local pub called the ‘West Riding’ at Dewsbury Railway Station, where I have spent many a happy hour in the West Riding drinking from their interesting range of real ales. The second is Colin Auty, who one of several people mentioned in the book who known to me, and also well-known to political activists in West Yorkshire.

Danny makes clear from the very start of his book his personal affection for Dewsbury and his two great loves, Rugby League and Journalism (yes, I have got them right, Rugby League comes first!).

Danny began his career as a trainee reporter at The Dewsbury Reporter, moved to other parts of the country to work on other titles, and then returned to Dewsbury as editor-in-chief of the Reporter. Since then he has set up his own newspaper, The Free Press (Dewsbury) along with some Rugby League titles.

When I was dealing with political activists in the Dewsbury area, the comment was regularly made to me by persons such as Colin Auty, David Exley etc. that ‘we always get fair coverage with the Free Press’.

His book has the staccato writing style of short sentences that marks a journalist-turned=author. I seem to remember a claim that journalists at The Sun were trained to get their point across in eleven words or less. Presumably journalists working for The Sun on Sunday have a shorter word limit, as many of their readers will still be hung over from Saturday night!

Some of the chapters in The Islamic Republic of Dewsbury are self-contained. Other chapters in the book have a narrative running through them, and some link to events in later chapters. Two examples of the latter are references in early chapters to a court case described in detail in a later chapter where S Malik (at the time, the Dewsbury Labour MP) sued The Press for libel (the jury could not agree a verdict in this case and the two then settled out of court), and Danny’s regular references to Baroness Sayeeda Warsi, who of course is from the Dewsbury area[1].

A couple of the early chapters give some interesting history of the area, and refer to local persons who have become nationally known. There is a typo in this listing on page 66: Danny refers to such well-known figures from Dewsbury as Eddie (‘oop and under’) Waring and Mike Stephenson (‘Stevo’), both Rugby League commentators; in politics he refers to Baroness Betty Boothroyd, the first female speaker in the House of Commons and, er, ‘former Labour politician Sir Marcus Fox MP’. He had better not tell the good Tories of Shipley who elected Sir Marcus as their MP for 25 years — he ended up as Chairman of the backbench 1922 committee.

I referred above to some interesting conclusions this book comes to, and the most important one that runs through it is that everything in Dewsbury is not a case of ‘White good, Paki bad’ like some sort of West Yorkshire version of Animal Farm. Danny strongly makes the point that, yes, there are persons in the Asian community who are venal, criminal, or both, although of course there are also persons in the non Asian community to which those words could be applied. In fact he names some of the venal/criminal Asians, but he also names Asian community leaders — including some Asian Councillors — who have at various times spoken out about the fractures between the two communities, who is behind it and what should be done.

And the real point is that Danny identifies ‘who is behind it’, as did some of those Asian leaders who spoke out, and writes about in forensic detail. Yes, there are some Asian leaders who are part of the problem — after all the Markazi Mosque and Shahid Malik MP do not get nice write-ups from Danny — but the biggest part of the problem identified by him is the ‘professionals’ in the ‘race relations industry’. It is in the race relations industry’s interest that there be ‘race relations problems’ for them to have to sort out. After all, if there were no such problems then the ‘professionals’ would be out of work, and, sure as hell, turkeys do not vote for Christmas.

As co-defendants on Danny’s charge-sheet you can add the local Council, Kirklees MDC and the local police force, the West Riding Constabulary. Living in Bradford I am well aware of the ‘institutional incompetence’ of the West Riding force[2]. 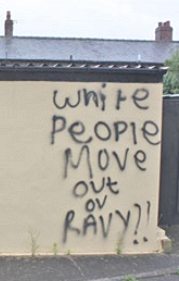 In his descriptions, the vast majority of Muslims in Dewsbury are hard-working people who just want to get on with their lives, and he has a similar description of the non-Muslim community. As one of his examples of Asian leaders who have spoken out about the problems between the communities and identified who is behind them, he mentions (page 155-156) Tory Cllrs Khizar Iqbal and Imtiaz Ameen. Cllr Iqbal spoke out at a Council meeting in 2003 about the ‘absurd political correctness, this fear of addressing the tough issues of the day.’ Among other issues referred to in Cllr Iqbal’s speech was the issue of ‘second-language assistants in classrooms (they wanted English-only spoken)’. The result was a standing ovation from members of all parties. As Danny comments ‘The vested interests of the race industry… were never going to be diverted… so casually’ and so it has proved despite the fine rhetoric. Note in that quote he refers to ‘race industry’ not ‘race relations’; his phrase sets out the agenda of that industry much more accurately than the normal wording!

Another example Danny quotes is the case of Lee Massey (page 246 onwards). The incident in which Lee Massey was nearly killed (his wife was asked three times by doctors if they could turn off his life support machine) started with greed by Kirklees Council! The Council agreed, in return for a substantial payment from the Home Office to provide housing for Iraqi Kurds, ‘refugees’ from Saddam Hussein’s regime. Yes, other councils in England have provided similar housing for ‘refugees’ but the Council must have been well aware of the very volatile racial situation in Dewsbury. The Kurds were put into Islamic areas such as Ravensthorpe and Savile Town, among Muslim populations many of whom regarded Saddam as a hero and the ‘Western powers’ offering sanctuary to the Kurds as ‘Satans’. The Kurds are described by Danny as ‘dissolute, non-English speaking’ (page 250-251) and soon were in conflict with the local Muslim community[3]. In the Lee Massey case a gang of up to twenty of them attacked a group of drinkers at the Royal Hotel Ravensthorpe. When other drinkers came out of the pub the Kurds ran away. Two of the Kurds then jumped into a car, a Honda Civic, and drove it at the drinkers, hitting Lee Massey.

Why have I particularly mentioned the Lee Massey case? As Danny Lockwood goes on to write (page 255) ‘Suddenly there were detectives and coppers and patrols all over Ravensthorpe… most of the Kurds had abandoned ship… to stay with “cousins” and friends across the country.’… ‘The community of Ravensthorpe, British white and Muslim together, suddenly found a common cause and a united front.’… ‘They marched together from Ravensthorpe to Dewsbury town hall to protest against Kirklees Council’s policy of housing migrants and illegals and creating such a combustible mix. For the most part they were making a decent fist of living alongside each other; the last thing they needed was another incendiary ingredient being poured into an already unstable mix.’

I have given above two examples out of the many vignettes that Danny writes about with great accuracy and detail in his book. The book is not a history of ‘How those nasty Muzzies wrecked my beautiful home town’. It is more a fascinating insight by a local journalist who on occasions had serious pressure put on him to change his reporting of events, an insight into how a mixture of civic authorities, race relations ‘professionals’, media, police and politicians failed in their public responsibilities. He is particularly scathing and forensic in his details about how local politicians of all parties and ethnic origins used, abused and then betrayed local communities for political gain. Anyone, particularly from the ‘mill towns’ of the North reading this excellent book could easily cut out the various names involved in various incidents and insert the names of persons from their local community — that is how relevant this insight is!

The Islamic Republic of Dewsbury : (ISBN) 978-0-9570964-0-0 . Paperback 8 ¼ x 6 314 Pages. Printed by The Press News Ltd. £14.95 Available from Amazon etc. If you want to buy direct from the publisher or to buy multiple copies to sell at events/meetings etc please e-mail sales@thepressnews.co.uk (mention ‘Ivan Winters’ in any e-mail)

8 thoughts on “A Systemic Failure of Public Responsibility”