The following article from Bild describes the inability of the German government to deport violent Lebanese criminals from the Federal Republic. As an interesting side note, the article asserts that 85% of the Lebanese living in Germany are dependent on long-term unemployment benefits.

Many thanks to Hermes for the translation:

They are Lebanese criminals, but in spite of this they cannot be deported 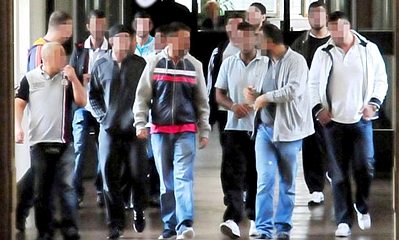 It was the list of shame — and it still is! Almost two years ago BILD reported that hundreds of Lebanese criminals living in Germany cannot be deported to their home country.

The reason for this is that Lebanon questions the citizenship of their own citizens and denies entry to them. BILD presents now a new and alarming list from the Interior Minister. This time, the list includes 207 extremely serious cases with convictions of more than one year in prison. Meanwhile there were 24 voluntary departures and 43 repatriations, but 51 new cases too about Lebanese serious criminals with no prospects for a quick deportation.

Some cases listed by BILD:

Lower Saxony’s Interior Minister, Uwe Schünemann (58, CDU), told Bild: “It cannot be that almost all those Lebanese nationals required to leave should remain in the Federal Republic after having committed serious crimes.

“It is imperative that Lebanon follows its obligation dictated by international law to withdraw its nationals. This must have a strong and unequivocal effect on the Lebanese Embassy and the Lebanese government.”

The following data from the Interior Ministry is also dramatic: of 34,885 Lebanese living in Germany 30,000 are dependent on Hartz IV (long-term unemployed welfare benefit), and 4072 are illegals — that’s 11.7%!

Caption for the photo shown at the top of this post:

A Lebanese clan in the corridors of a court of justice. Rabih H. is among them. He was sentenced for 62 cases of drug dealing.