A Spanish performance artist is causing controversy by the public practice of — what should we call it? Koranophagia?

The article below was published in the Sunday edition of Deia. Many thanks to our Spanish correspondent Hermes for the translation:

His work ‘eating a Koran’ criticizes religious fundamentalism. It is composed of an installation, a video and a performance 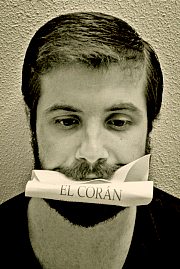 The Navarran artist Abel Azcona, an international exponent of performance art, is receiving threats as a result of his work “Eating a Koran”, in which he swallows pages of the Muslim holy book.

This is part of a research project which was started during a seminar about religious fundamentalism and the necessity to “feed ourselves with fiction, lies and fear”. This work comprises an installation, a performance and a video production, in which the artist spends six hours eating a Koran as a critique of religious radicalism. “I believe in freedom of speech, provocation, and artistic freedom, and I will surely continue doing it today, tomorrow, and forever,” Abel Azcona himself commented. He has received threatening emails and SMS messages.

‘I believe in art as a tool for critique and for setting up debate about identity policy,” the Navarran artist adds. He received criticism since he engaged in the world of performance, “but this will never change my way of thinking and working. And what’s more, threats clear my path, and thus I know that I am on the right one.” That is why he will continue using art as a “weapon of criticism for anybody wishing to feel and listen to it.”

Abel Azcona, who now lives in Iruñea, has worked in Spain, France, UK, Germany, Mexico, Venezuela, Colombia, Peru, Argentina, the USA, the Philippines and Japan. His childhood was marked by mistreatment and abandonment, so now he uses his projects to fight against fear and fundamentalism.

He does artistic installations, videos, photographs, sculptures and found art, and his works are autobiographical, using pain in order to create empathy with his feelings, and using provocation in order to force viewers to take part in the process.

He will soon travel to Malaga, and in February to Bogotá, where he will spend two months giving workshops, performances and talks.

6 thoughts on “A High-Fatwa Diet”