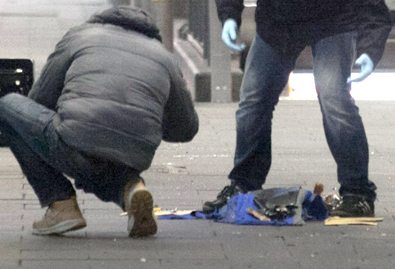 An improvised bomb was left at the railway station in Bonn yesterday, allegedly placed there by Salafists. Fortunately, it was never detonated.

Our German correspondent Tiedar sends this brief report based on German-language media sources:

Yesterday’s MSM news reported that a suspicious bag was found at the station in Bonn. Therefore the building was blocked off around 2 pm, train traffic was suspended, and police investigated the bag.

After several hours the bag was blasted with a water cannon. Inside there was a clock with connected wires connected to it and some metal bowls filled with powder. Later on it was said that the bag contained “potential flammable material”, and at around noon today it was reported that the police were searching for two alleged Salafists.

These two men, known by the police as “terroristic threats”, are suspected of placing the bag in the station on Monday. Two students identified them in a photo. Now the two men with the noms de guerre “Dahir” and “Buh” are being sought throughout Germany.

3 thoughts on “Would-Be Bombers in Bonn”