MC in Sderot sent this photo essay the other day. Since we’re in the midst of the celebration of Hanukkah right now, I thought posting this would increase my motivation to make latkes. I make wonderful latkes — what Irishwoman wouldn’t? Their main ingredient is potatoes, what could go wrong? Unless you’re not supposed to eat potatoes anymore… *sigh*.

Enjoy the pictures of the children! They remind me of the orphanage at Christmas during my own childhood. The Knights of Columbus brought us huge bags of utterly wonderful doughnuts, every variety you could imagine! The first few days they were great, but as they began to harden they changed into another kind of food. In order to eat them, you had either to dip them in milk or crack them into smaller pieces . My preference was eating them sans milk, but I rather made a mess getting them apart into mouth-sized donut “rocks” and scooping up the crumbs later.

As we began to run out of them I found I actually preferred the donut rocks to their initial state of gummy softness. The same went with bags of day-old bread we were given. No matter how the nuns tried, eventually those already-stale loaves would either mold or harden. So I asked that rather than let them mold we take them out of their bags and let them harden in the always warm gas oven. I’d put honey on a rock and let it soak into the porous lava-like structure. It even started a fad of sorts. Think of it as early whitebread biscotti; I was ahead of my time. My idea reminded one of the nuns about bread pudding, a dessert that requires stale bread. The cinnamon was wonderful but the dessert itself returned perfectly good hard bread rocks into gummy sweetness. Ah, well…

The kids look like they’re having fun. And the pictures reminded me to drag out my menorah: any excuse for candles as the days darken. Those Danes are smart — their custom of lighting up their rooms is quite cheering. I’m glad the Baron brought home this idea from Copenhagen…

The Hanukkah Party
by MC

This is a little article mainly to say thank-you to those who contributed to our work in Sderot. I also want to show you a little about what it’s like to live on the front line. 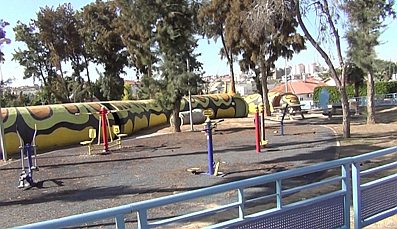 We will start at the children’s playground Just outside the Chabad hall we use. That yellow ‘snake’ on the right is actually a very clever bomb shelter, parents and children can be under cover in seconds… if they run.

The Hall is attached to the Synagogue. 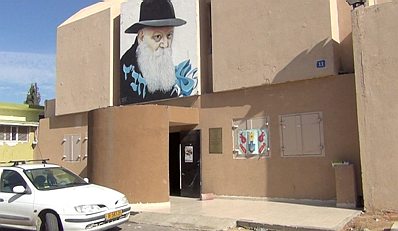 There is a blast wall protecting the heavy steel doors. This is how our culture has been “enriched” over the past few years. Note the steel shutters on the windows. 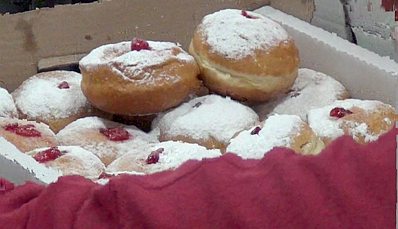 Doughnuts are the traditional fare at Hanukkah. The ones you see here were kindly donated by E’s sister’s boss in Tel Aviv. 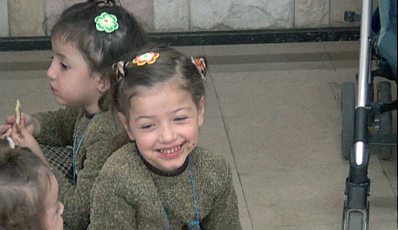 And a precious smile from a Sderotian child.

Despite what the propaganda claims, we are not apes and monkeys. This little girl has just been through five weeks of incessant bombardment. Gates of Vienna donors put that smile there (and the chocolate). 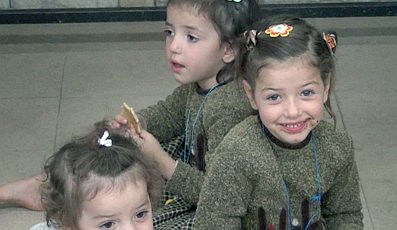 She has just seen the camera, and gives us an even bigger smile. Thank you, Gates of Vienna! 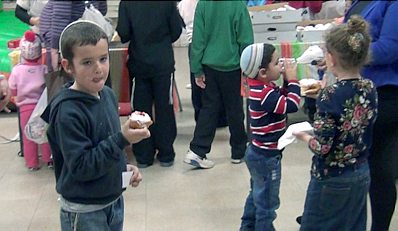 These children just want normal lives. They do not care for the politics, the pride and the passion; those are adult things. They should have the right to grow up as I did, far away from explosives and bomb shelters, but they are the innocent targets of a capricious god and his prophet, whose respect for children was non-existent and by whom these little ones can be used and abused and killed.

We try to keep our kids out of the firing line: we build strong points for them and we do not put them in harm’s way to defend our cause. They are as safe as we can make them, given the malevolence of the enemy. We do not need to indoctrinate them — every incoming missile does that without our help. And when occasionally a school friend is maimed or killed, they do not need telling the ‘whys’ or ‘hows’.

These are not rich kids; many are poor. Some do not have enough to eat, and I thank your donors for helping us with that. It is a struggle to keep everyone fed.

When I look in their eyes and see the anxiety they carry — wealthy or poor, fed or hungry, there is no difference for that burden.

Yeah, those are good-looking kids, and yeah, I knew that anxiety at their age. No one was throwing bombs at us (an occasional rock-throwing Baptist kid was an exotic experience, not a threat), but children carry outsized fears that tend to go underground as they grow up.

All children face anxiety of the unknown and sensitive kids turn it into matters of life and death in a heartbeat. It is an interesting fact of child development that adolescents feel immortal — and have the car insurance rates to prove it. But that’s just a cover for the earlier, truer sense of the fragility of existence young children know well, even if they can’t or won’t articulate it. Their fear is not so much one of dying as it is the terror of helplessness: who will take care of me?

Existential anxiety?? These children live it. Please, dear readers, give what you can to make their lives a bit easier. The Sderot DONATE button is on the sidebar. If any of you know of a website that would be willing to carry the Sderot Donate widget on their sidebar, ask them to write us.

It doesn’t have to be for the holiday season. Their needs know no season. That donation button won’t stale-date.

One thought on “The Hanukkah Party”