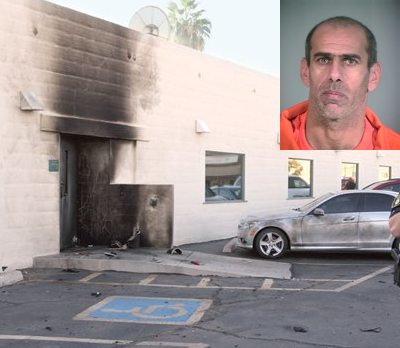 Twenty-one years ago, Abdullatif Ali Aldosary was waging jihad against Saddam Hussein and his army. Last month he waged jihad against a Social Security Administration office in Casa Grande, Arizona.

Mr. Aldosary is presumably one of those Iraqi refugees who were so kindly brought into the country by Uncle Sam after our various kinetic engagements in the Middle East. Or maybe he walked across the nearby border with Mexico; it’s hard to tell. In any case, the federal immigration authorities allowed him to stay in the country, despite the fact that he was officially know to have “engaged in terrorism-related activity”.

This story isn’t getting much play in the national media. If it had happened under a Republican administration, or if the suspect had been less culturally enriched, presumably we might be seeing more of it.

Fortunately, Rep. Paul Gosar (R-AZ) — whose office is just a block away from where the bomb went off — is determined to hold the Department of Homeland Security to account. Here’s a news report from KHPO TV in Phoenix (sorry about the commercial; there’s no way to get rid of it):

Below is the accompanying article:

Gosar questions how bomb suspect was allowed to live in AZ

PHOENIX (CBS5) – An Arizona congressman is asking federal officials why the man suspected of detonating a bomb outside the Arizona Social Security Administration office in Casa Grande was allowed to live in Arizona despite being classified a person who had engaged in “terrorism-related activity.”

Rep. Paul Gosar, R-AZ, sent a letter to the U.S. Department of Homeland Security and the U.S. Citizenship and Immigration Services on Wednesday with specific questions about the status of 47-year-old Abdullatif Ali Aldosary.

Aldosary on Tuesday was ordered held in jail pending a preliminary hearing. Investigators said instructions on how to construct an explosive device, bomb-making materials and chemicals were found in his Coolidge home after a small explosion outside the building in downtown Casa Grande on Friday morning.

Aldosary had approached Gosar’s office with a request for a “green card” and in November 2011, Gosar forwarded that request to immigration officials.

Gosar said DHS responded by saying Aldosary was not eligible for a permanent change to citizenship “pursuant to the terrorism-related grounds of inadmissibility, and that “individuals who engage in terrorism-related activity … are barred from receiving various immigration benefits.”

When CBS5 reached out to DHS, Immigration and Customs Enforcement spokeswoman Amber Cargile responded, “Mr. Aldosary has an adjustment of status petition currently pending with U.S. Citizenship and Immigration Services after a previous denial of legal permanent resident status due to his participation in an uprising against Iraqi government forces in Basra in March 1991, during the Gulf War.”

In light of the Casa Grande bombing, Gosar questioned why Aldosary was not detained and processed for deportation in November 2011, after it was determined he had engaged in terrorism-related activity.

Gosar also asked what efforts were made to track and monitor “a known terrorist.”

Another government official, who asked not to be identified, said just because an application is denied or on hold – because of the part of immigration law dealing with terrorism-related activity – doesn’t mean that person is a terrorist.

The official stressed, “Terrorism-related inadmissibility grounds (TRIG) in immigration law are broad in scope and they don’t always differentiate between armed groups and the purpose of their activities. So they include activities that we wouldn’t commonly consider to be ‘terrorism,’ such as activities that were performed under duress. They also don’t have an exception for ‘freedom fighters,’ such as a resistance group that is fighting a dictatorial regime.”

The Nov. 30 bombing happened about a block away from Gosar’s office.

“But for the grace of God, no one was injured in the bombing,” he wrote.

Aldosary is charged with maliciously damaging federal property by means of explosives and being a felon in possession of a firearm. A federal judge in Phoenix has set a preliminary hearing for Tuesday morning.