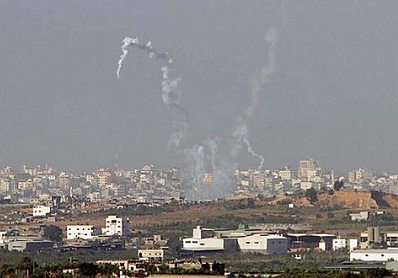 Our Israeli correspondent MC offered to help out with our quarterly fundraiser by sending a post for it. Since Sderot is living through its own aftermath — the illusory calm of the hudna following hundreds of rocket attacks from Gaza — his analysis of the systemic crisis of the West is appropriate for the occasion.

Sderot remains quiet, but cynical. We have been here before, we have waited before, and the missiles always return. The hatred of our cousins is age-old, and now the flames are fanned by political intrigues and diplomatic manoeuvrings.

Moral relativity is corrosive; it destroys the community, and every man or woman becomes his own arbiter, and, quite naturally looks only after his own interests. After all, the community is no longer to be trusted; its morality is flexible and unreliable. Tomorrow it could be my turn to face the contempt of society.

I suppose we wait, We wait to see how we have been betrayed this time, we wait to see how we are to be demonized yet again, we wait for the T-ball political charade to play the next cycle in its no-win game (which we always lose because we are ones sitting on the tee awaiting the strike).

But on the high side, the children are playing in the park once more, and life has returned. And we know that a few people out there know the truth.

And your contributions to the bleg can help…

Is the pen still mighty?
by MC

It is still eerily quiet in Sderot , and we are still wondering what the ‘secret’ protocols of the ceasefire were/are. With an election coming up, Bibi has put himself in an untenable situation. The coercion must have been extreme. This does not bode well for the Sderotian in the street.

We have Jihadist dictatorship in Egypt, ‘Palestinian Statehood’ (whatever it means, they will still be demanding huge amounts of Israeli tax shekels), and the USA and EU both heading for political tyranny.

The key to this is the collapse of media integrity. Dissent has been consigned to backstreet blogs read only by that tiny section of the community who are vaguely internet-literate. The mainstream media are now so tightly controlled that it can only show politically correct panini and soft-porn celebrity circuses.

As a result, democracy is effectively dead. It retains the form of public participation, but denies the power thereof. All is vanity, a wise man once said.

So how do we get Homer out of the catatonic state induced by the mind-poisoning programming on his TV?

I don’t really want to think about the answers, but the enemy seems to be doing really well. Why? Because they are prepared to risk death and imprisonment in order to put fear into the hearts of all and sundry, and our respective governments appease them rather than fight them.

Tommy is in gaol, and it is unclear why he is in gaol. But at the same time, murdering Jihadists go free.

The ‘liberal’ establishment is notoriously illiberal and does not like criticism. In this it makes a compatible bedfellow with its Islamic partner. But we must ask ourselves: who wears the burka and who wears the veil?

In the garden is a tree of the knowledge of good and evil, but unless one is God, the good and the evil are relative. In the hands of a liberal, or a Jihadi human, the ‘good’ is malevolent and the ‘evil’ is monstrous.

God has the absolute knowledge required to make the tree work, but for a human, the tree means death and destruction.

The antidote to the tree is the ten commandments, enshrined for centuries in Western political and religious ideals, and although not a perfect implementation, barbarism was mostly kept at bay by them. Then enter the ‘political religion’ into the equation. Islam lacks the basic control structure that mankind needs in order to live in a plural society, so its politics are unconfined by a set of cohesive values, and in the ‘House of War’ it has no values at all.

Thus the much-vaunted Islamic morality becomes a twisted weapon of its own barbarism. But at the same time Islam regards itself as above criticism. One political religion might be containable, but it was subsequently joined by another, that of the socialist dictatorship. The first; the Jacobin poligion, supposedly based upon the ‘reason’ of mankind, fizzled out in the gory mess of the reign of terror. It subsequently re-emerged as the joint poligions of Nazism and Communism, alike as two rotten peas in a stinking pod. They too had their gory reigns of terror and fizzled out (in Europe anyway) in the same stench of gulag and death camp.

But evolution is the mantra of the modern poligion, and so it mutates into the creeping tyranny of manipulated democracy. Same humanity, different uniform: the ‘friendly’ face of (enforced) socialism.

Can the mighty pen be wielded effectively when so few have the means or the will to read? Maybe, but the real question is not about doctrine; it is about a hugely rich Islamic establishment which has bought out the Western democratic and media establishments. It is also about the will to violence, the fear of violence and the toleration of violence.

It is a carrot-and-stick manipulation, the carrot being the vast oil wealth, the stick being the fear of violence. But who is driving the donkey cart of state? Where does it want to go? It is this that remains obscure — why are they allowing the invasion and occupation of our countries?. It should be the job of the now moribund mainstream media to ask the questions and to expose all this. Can the blogosphere — our only remaining free press — remain free enough to do the job? Who knows?

It now seems that our governments can fool most of the people enough of the time to trample freedom to a gory pulp.

6 thoughts on “Is the Pen Still Mighty?”