The left-wing indoctrination service and old boys’ network known as Common Purpose has been in the news lately in Britain, thanks to the fact that one of its graduates took away the foster children from a couple in Rotherham for being members of UKIP.

A recent article at the ICLA website takes a look at the possibility that Common Purpose played a role in the sacking of Chris Knowles from his position with the Leeds City Council.

Did Common Purpose Have A Role In The Sacking Of Chris Knowles Of The International Civil Liberties Alliance (ICLA)? 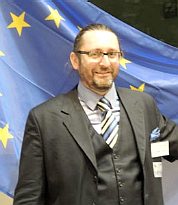 In the aftermath of the politically motivated discrimination by Rotherham Council of UKIP supporting foster parents there has been much speculation about a shadowy organisation called Common Purpose. Richard Pendlebury asked some important questions about that organisation in a recent article in the Daily Mail. If what has been said about Common Purpose on a great many websites is true then it would certainly explain some of the things that happened to me.

Back in December 2011 Leeds City Council stated that the reason for my suspension from my job was as follows:

“…the council has received allegations that you may have engaged in political activities, which could be viewed as improper activities for an employee of the council to be engaging in, and contrary to the councils values and equal opportunities policies.”

Leeds City Council has never provided me with evidence that this was indeed the case. Perhaps “which could be viewed” just meant that the political activities that I was accused of engaging in were based on views that senior managers did not agree with. Of course if senior managers are allowed to determine the political views of their subordinates then democracy is rendered obsolete. Perhaps this is what Common Purpose means when it refers to a ‘Post Democratic’ society?

After 7 months of investigating my case all they could come up with was the following as a reason for sacking me:

“The council has concluded that your behviours and values are so different from the council’s values, that this is a fundamental breach of your employment contract.

The council strongly believes in its values and exists to serve the citizens of Leeds, your own beliefs and behaviours are in opposition to what the council stands for and because of this, the council has chosen to dismiss you without notice and without right of appeal.”

In other words you are sacked because we say so — is this what is meant by the common purpose phrase “Leading Outside Authority”. In terms of the values referred to, who decides what they are — Common Purpose? I certainly do not remember my local Council asking the public what the Council’s values should be! In any event, Leeds City Council did not even tell me which specific values were so different to their own. Perhaps if they had, many Council Tax payers in Leeds would have spoken out in my favour. Could it be that Council values are developed behind closed doors by a group of people who are both anonymous and unaccountable? If values are kept secret or not clearly defined then they are certainly not open to public scrutiny. Perhaps such values allow for open discrimination of people who are members of political parties such as UKIP or campaign against sharia on the basis of human rights!

The equivalent position in the private sector would be for the owner of a company to sack people for belonging to a trade union or socialist political party. It could be argued that the values of both are at odds with the values of the capitalist system on which the private sector is based. Of course there would rightly be an outcry if this sort of logic was applied and people were prevented from earning a living as a result. Should private sector employers be free to bully their workers into sharing their political views? Should employees of such companies be forced to become Conservatives?

Common Purpose does not seem to like Conservative ideas. What if a group of people who did not like socialism decided to set up a work based network designed to develop future leaders? What if members of such a group worked together to ensure that anyone who challenged their world view was made to fear for their livelihood, liberty, or ability to play a full and active party in society? What if people were sacked from their jobs for being unpatriotic? People would rightly call such a regime a tyranny and demand immediate change.

When I turned up for the meeting at which I would eventually be dismissed a Police Chief Inspector was present and intending to be present at the meeting even though it was an internal meeting. Did this police officer and the Council officer meet as part of the Common Purpose ‘old boy’ network. Unfortunately the Chatham House rules that Common Purpose applies means that I will probably never find out.

Thankfully I turned up to this meeting with a lawyer and it was acknowledged that the police officer had no right to be in the meeting. I can only assume that the police officer was there to intimidate me, or to use a phrase that they often use themselves — to cause alarm and distress. As it turned out the sole purpose of the meeting was to dismiss me and only lasted a few minutes — goodness knows what had actually been planned prior to my lawyer changing the game!

Fear seems to be something that public bodies increasingly use against the people they are supposed to serve. The aims of those responsible for the Rotherham scandal undoubtedly wanted frighten those who were naturally opposed to their agenda and did not anticipate such a vociferous reaction. Their approach is a classic scenario involving the demonization of ‘the other’.

The application of fear was applied in my case, not just to me but to any other person who wanted to oppose sharia yet at the same time work for a local authority. The message sent out was clear — if you work in the public sector and oppose sharia then you will be sacked. Why local authorities want to encourage something like sharia is beyond me — perhaps it is a case of high officials not bothering to do due diligence about what sharia actually is! It is clearly not something that promotes equality of opportunity. In Rotherham the intended message was also clear. If you are a member of UKIP, which we do not like, then you cannot be foster parents! There are certainly parallels in both cases with the anti-communist ‘witch hunts’ organised Senator Joseph McCarthy in the 1950s against those deemed ‘unpatriotic’.

Of course it is very easy to dismiss justifiable concerns by labeling people ‘conspiracy theorists’. There seems to be a lot of such labeling going on in relation to Richard Pendlebury’s Daily Mail article.

However, if everything is a conspiracy theory then how can actual conspiracies that are working against the public interest be revealed? How can the powerful be held to account when bad behaviour is explained away as a mere conspiracy theory? If there is a shadowy network operating behind the scenes how can we be sure that inquiries into matters of public concern are anything other than cover-ups? The Rotherham scandal is probably not an isolated case, but the inevitable cover up is probably more likely than solving the problem of politically motivated discrimination across the public sector. Common Purpose does appear to be an organisation that should be subject to an independent inquiry, but is such an inquiry even possible if key positions are occupied by Common Purpose ‘graduates’?

It seems that if you don’t share the political views of senior managers you have no right to work for or even benefit fully from the public sector organisations that they control. Those who hold high official positions may claim to represent the whole community but clearly many of them do not. There definitely seems to be a politicised agenda at work in the public sector in the UK. This is an irrefutable abuse of power and is quite sinister.

When it comes down to it, as the Rotherham issue demonstrates, it is the senior officials themselves who cannot leave their politics at the office door. They are the ones with the power to sack their subordinates, even without a proper hearing! Indeed it seems that they are in fact employed specifically for their politics. These are people who can and do significantly influence decisions and determine what services people receive — unlike lowly administrators like me. Yet the senior officers get away with such abuses of power and these abuses actually seem to be official policy. When the furore over the Rotherham scandal dissipates after the forthcoming by-election then things will probably settle back down to business as usual in which modern day Torquemadas can do their work.

Chris Knowles is a civil-liberties activist for the International Civil Liberties Alliance (ICLA). He participated in the Brussels Conference on July 9, 2012, and assisted with the writing of the Brussels Declaration.

Previous posts about the dismissal of Chris Knowles: