Our Spanish correspondent Hermes sends his translation of a story about culturally enriched theft and assault, from yesterday’s Alerta Digital:

Barcelona: With his cell phone a kid photographed a Moroccan who was lowering a TV wrapped in blankets from [the balcony of] the first floor 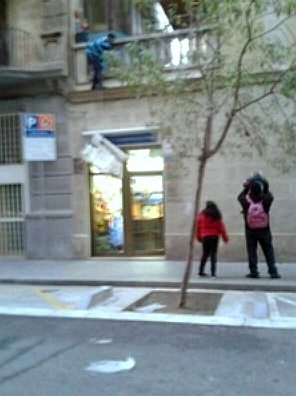 In the Poble Sec neighborhood of Barcelona, agents from the Barcelona Police Department detained the 19-year-old Moroccan national A.E.J. on charges of being the alleged perpetrator of a theft, attempting a physical attack against security officers from Barcelona city hall, and disobedience of and resistance to authority. The arrest was carried out with the help of an 11-year-old kid, who warned the officers and photographed the burglary-in-progress with his cell phone.

The kid, who was returning from school, spotted the man who was lowering a TV wrapped in blankets from the balcony of a first floor at a building located in Magalaes street, and he decided to take a picture of what was happening with his cell phone. The kid warned some security officers from the city hall of Barcelona who were patrolling nearby, and he identified the suspect when he walked by in their vicinity.

The security officers decided to follow the suspect and call the police. Feeling threatened, A.E.J. threw a butane gas canister at them and missed. In addition, when the agents from the Barcelona Police Department attempted to detain him, he broke a glass bottle, which he used to threaten the agents, and with which he tried to injure himself. The agents succeeded at handcuffing him in Vila Street, at about 5:30 p.m.

4 thoughts on “Balcony Heist in Barcelona”