Kevin Carroll, a co-founder of the English Defence League and vice-chairman of the British Freedom Party, ran for Police and Crime Commissioner in Bedfordshire yesterday.

Kevin’s campaign was always a long shot. What with the demonization of the EDL by all national media outlets, the destruction of his billboards, and various other administrative shenanigans designed to impede his campaign, outright victory was not something to be expected.

However, the results of yesterday’s vote prove that Kevin’s candidacy was far from quixotic. Not only did British Freedom recoup its £5,000 deposit, but Kevin received more than 10% of the vote. His count was about a third of that of the Labour candidate (the presumed winner) — an amazing achievement for a first-time candidate in a brand new party. 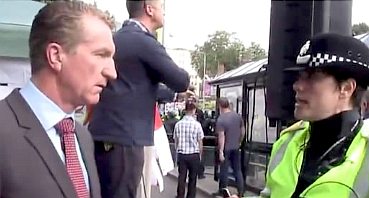 The election for Police and Crime Commissioner in Bedfordshire took place yesterday. Kevin Carroll stood as the British Freedom candidate and did surprisingly well.

British Freedom is a relatively new party and the recent election was the first that the party had put in real effort to contest. Many people had not even heard of British Freedom before this election. As a result, party officials were surprised that the deposit was retained.

To retain his deposit Mr Carroll needed to receive at least 5% of first preference votes, which meant that he needed over 4,208 of the votes cast. In the end he received 8,675 votes — just over 10% of the total votes cast.

What was even more surprising was the number of second preference votes received by the British Freedom candidate. Many of these came from people who had voted Labour as their first preference. This must be a serious worry to Ed Miliband and the Labour Party leadership. Labour voters were sending a signal that their votes cannot be taken for granted and that they are more than willing to put their support behind British Freedom. Including second preferences British Freedom received 25,000 votes.

Another interesting development was that Mr Carroll seemed to do even better in the rural areas than in Luton town. Luton Town of course is the heartland of the English Defence League (EDL) which Mr Carroll jointly leads with his cousin Stephen Lennon. This would suggest that he received middle class as well as working class support. This may mean that he will be able to bridge the class divide in future elections.

During the campaign a variety of obstacles were placed in the way of Kevin Carroll. He experienced constant demonization due to his opposition to sharia law and increased sharia compliance. He was confronted by a very unfriendly press and he had campaign billboards vandalised and forcibly taken down at a key point in his campaign. In the absence of negative campaigning against him and without interference with key campaign materials he would have undoubtedly done even better.

As far as British Freedom is concerned the campaign has been a great success. The election has raised the profile of the party and increased awareness of its policies and values. It has been a very useful dry run for standing in parliamentary elections in Bedfordshire constituencies. Party Leader Paul Weston is said to be delighted with the progress that the party has made in such a short time.

Details of the vote:

The discrepancy between the sum of these numbers and the official total is due to “rejected ballot papers”.

7 thoughts on “Strong Showing for Kevin Carroll in Bedfordshire”