Our Israeli correspondent MC sent this report from Sderot yesterday — the day that Hamas fired missiles into the southern reaches of Jerusalem — but the press of events has prevented me from posting it until now.

When he refers to “this morning”, he means the morning of Friday November 16. 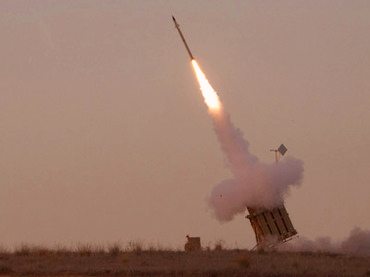 I walked down to the supermarket this morning, it is yom shishi (day 6) and Shabbat comes in at around 4:30 pm. The centre of town is usually busy with people buying for the weekend, but today there is parking and there are relatively few people shopping.

Israel has been asked to stop shelling Gaza for the visit of the Egyptian PM, but this is apparently a one-sided request as we have just had another missile as I write.

Israel and Israelis contribute huge amounts of money and resource to the ‘Palestinians’ but these favours go unrecognised, both by Palestinians and by the world at large. Gaza willingly accepts electricity, fuel and materiel, but feels that Allah exempts them from any form of thank-you. It is, they believe, their rightful due as worshippers of Mohammed.

There is a history of Jews appeasing their bitter enemies with gifts and money to try and buy peace. Curiously enough, it never worked and the situations just got worse. It does indeed become a snare.

Today I am going to visit K to remove the malware known as ‘Babylon’ from his computer. Babylon is parasitic software that attacks browsers and in so doing negatively affects the whole of the computer. The removal process involves clinical surgery on the registry or else the disease re-infects its host.

Babylon takes over the whole interface to the net, and controls what the user can do or see, it renders the computer the tool of the Babylon control centre. It even supplies a help desk, for which the user must pay Babylon in order to get help with the problems caused by Babylon.

Sometimes I get a weird sense of déjà-vu. The threat of (Islamic) violence insinuates itself into the whole psyche of a society and culture and renders much of it ineffective. We begin to react irrationally.

The only solution is to surgically remove the parasitic mass, to leave it in place is to let it fester to the point that it just re-infects.

I would like the company behind the Babylon malware to be surgically removed from the net, along with all of its adherents, those who allow their websites to host the malware (for a cut in the action). It will eventually come to this, when the hurt to people like K become so intense that they start to really protest.

K came into Hope for Sderot on Wednesday. he was crippled by a qassam missile a few years ago. His ancient computer is precious to him, it allows him to continue to experience the outside world from home. This malware has seriously affected this ability. I went with him to his apartment and got rid of the ‘active’ part of the bug, but it takes effort and expertise to get rid of the more insidious aspects of it, I will do it this afternoon. If I get it wrong I will have to rebuild his computer from scratch.

K did not know he had malware; to him his computer was just ancient and too slow to handle the more modern software. He had noticed that it was not behaving as he expected, but he could not envision what could be wrong, he had no idea that the image he was seeing on his screen was that of a malevolent group of people far removed from himself and who certainly did not have his best interests at heart.

Now that he has been liberated he is extremely angry at having been duped.