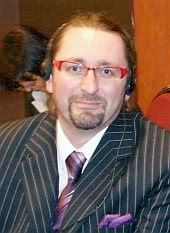 As most readers already know, Chris Knowles is a British Counterjihad activist for the International Civil Liberties Alliance (ICLA) who was sacked from his job with the Leeds City Council last summer for his political opinions.

Now Chris is fighting back, with the help of the Legal Project: he has initiated Employment Tribunal proceedings against his former employer.

The following report has just been posted at the ICLA website:

5 November 2012, Wakefield, UK: Chris Knowles a human rights activist from the International Civil Liberties Alliance (ICLA) has confirmed that he has initiated Employment Tribunal proceedings against Leeds City Council. Mr Knowles’ case for unfair dismissal is scheduled to be heard by the Employment Tribunal on 13 March 2013. Mr Knowles who is assisted by the United States based The Legal Project, an activity of the Middle East Forum, said:

“The action taken against me by Leeds City Council is an outrageous and unacceptable attack on my fundamental human rights. The right to freedom of expression is an essential part of any democratic society. Leeds City Council conducted itself in the manner of a tyrant engaged in Star Chamber justice. The Council’s action is both vindictive and politically motivated. It is the equivalent of being dismissed for engagement in Trade Union activities.”

Mr Knowles began his work with the Council in February 1996. He worked in the Governor Support Service from 1 September 1997 until his dismissal on 2 August 2012. He was not employed in a politically restricted post and until his dismissal he had no disciplinary charges or findings against him. He was suspended from work in December 2011:

“because the council has received allegations that you may have engaged in political activities, which could be viewed as improper activities for an employee of the council to be engaging in, and contrary to the councils (sic) values and equal opportunities policies.”

Sam Nunberg, Director of The Legal Project, sees Mr. Knowles’ s eight month suspension as faulty. “The Leeds City Council suspended Mr. Knowles based on shoddy journalism and mere innuendo. The Council had no qualms with keeping Mr. Knowles in limbo and unaware of his financial future all because he exercised his universal right of peaceful assembly and association,” said Mr. Nunberg.

After his eight month suspension, Mr. Knowles was summoned to a meeting to hear the results of the Council’s investigation on 2 August 2012. He expected either to be told he could return to work or to be presented with a specific disciplinary charge supported by evidence. Instead he was summarily dismissed without due process — and without the right to appeal. On 3 August he received a letter giving the following explanation for his dismissal:

“the council has concluded that your behaviours and values are so different from the council’s values, that this is a fundamental breach of your employment contract.”

No information was provided to Mr Knowles outlining what exactly he was alleged to have done that was in breach of his contract of employment. On 10th August 2012 a Barrister acting on behalf of Mr Knowles sent an email to Leeds City Council asking the following questions:

The email was acknowledged but the questions have never been answered. Is this Leeds City Council’s approach to transparent local governance? While Mr Knowles has not been afforded any proper explanation as to why his position was terminated, he looks forward to receiving answers during the Employment Tribunal proceedings.

Chris Knowles is a civil-liberties activist for the International Civil Liberties Alliance (ICLA). He participated in the Brussels Conference on July 9, 2012, and assisted with the writing of the Brussels Declaration.

Previous posts about the dismissal of Chris Knowles:

3 thoughts on “Bringing the Leeds City Council to Justice”