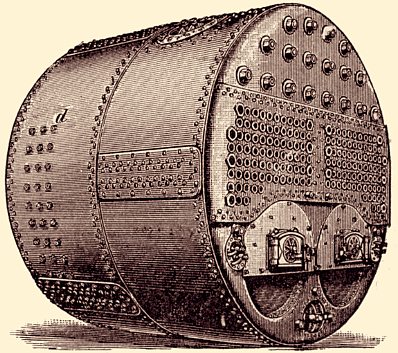 This week’s “Aftermath” fundraiser theme has produced a lot of gloom and grimness — especially when considering the aftermath of the recent presidential election. And just think how much worse it could get if we were to focus on, say, the aftermath of Hurricane Sandy in New York City.

So, for a change of pace, this morning I’ll veer off into a different sort of aftermath, one that is more mundane and even has a happy ending. It will also tell our readers what their generous donations actually pay for here in the drafty old halls of Schloss Bodissey.

“But Baron,” you say, “we already know what you spend our donations on: wine, women, and song! OK, maybe not women, not at your advanced age. But I’ll bet you’re awash in Chateau Plonque while you and Dymphna get down and boogie all night with the stereo turned up full blast.”

Well. Yes, that does sound nice. And every now and then a bottle of Chianti from the wine section at Food Lion certainly helps take the edge off reading about the Muslim Brotherhood, or the prospect of four more years of ObamaNation. Pass that bottle again, would you…

However, sometimes more urgent necessities intervene. One such moment arrived a couple of months ago, late on a Thursday night, when our electric water heater suddenly developed a breach in its containment vessel. The heater is in our mud room — I don’t know if that’s a regional expression or not; it means a grubby little room between the back porch and the main house where you keep your boots and antifreeze and so on. When I went out there to get something, I put my bare foot into a squishy puddle of water where no water had any right to be.

I quickly tracked the flow back to its source: the top of the water heater where the outflow pipe exits the tank. I turned off the water valve, cut the breaker on the heater, and then Dymphna and I gathered as many rags and towels as we could find to pile around the base of the tank.

That heater held forty gallons, however, and by the time it bled out the following morning it had exceeded the capacity of all those rags. The floor of the mud room was sodden from wall to wall. It looked like a duck pond in training.

I called the main plumbing outfit in the small town nearest us as soon as they opened. They’re pretty good about fast action in emergencies, and the woman at the desk managed to track down a forty-gallon heater in Charlottesville, and then sent a guy out to install it that afternoon — we didn’t have to wait until Monday, thank the Lord!

The old heater was inside a cabinet, which had to be dismantled first. Then the new heater was brought in, and a couple of hours later we had hot water again.

Thanks to the generosity of Gates of Vienna readers, that is. We still had enough money in the bank account left over from the summer fundraiser to write the check for that water heater.

Since the old heater was in bad shape — we had to take 30-second showers or baths in a half-filled tub — we now have the luxury of an ample hot water supply.

All of our generous readers may picture me now, sitting in a tub full of steamy hot water, still wearing my pickelhaube whilst pushing my rubber duckie around in a billowing cloud of lavender-scented bubble bath.

That’s your doing. It’s your donation dollars at work.

The story of the Great Schloss Bodissey Boiler Explosion doesn’t end there, however. The aftermath continued for almost a week.

We were fortunate that the incident occurred while the autumn weather was still warm and extremely dry. Central Virginia was in near-drought conditions at that time, so opening the door and the storm door 24/7 was feasible, starting before the new heater was even installed.

After the plumber had finished his work no standing water remained. But the utility carpet (no pad underneath, thank goodness) was soaked through and squishy to walk on everywhere in the room. Not enough for a Shop Vac to suck up, but too much to leave to its own devices. 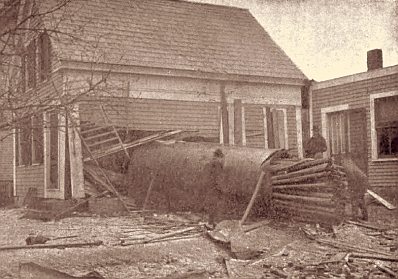 First we had to haul out all the gear that rested on the floor. The more or less rainproof items went outside for the duration, and everything else came inside to clutter up the laundry room.

Next I brought in two electric fans. One of them was an ordinary three-speed window fan, but the other was a high-powered industrial-strength exhaust fan. The latter had been donated to us by our good friends Wally and Hulla Ballou last July after our loss of air conditioning, when the hundred-degree temperatures reminded us that you can’t have too many fans in the house.

I set those two fans up in such a way that they were angled towards the floor and boosted each other’s air flow. They stayed on night and day for five days, and every morning I shifted them around to cover a different part of the room. The door opens to the south, so the sun came in every morning for several hours to help the drying process.

The weather stayed mostly clear, the humidity remained low, and that carpet dried out completely. No mold appeared, and a week later we were back to normal — with a cleaner mud room than before we started.

All in all, a satisfactory resolution to the aftermath of the crisis. And, once again, thanks to our generous donors.

Yesterday’s donations came in from an unusually eclectic set of places. As far as I can recall, this is the first time we have ever received donations from India or Indonesia:

Many thanks to everyone who gave so generously to help keep the Gates of Vienna operation going.

I spent an entertaining couple of hours researching boiler explosions to find the images for this post. There are some fascinating accounts on the web of boilers and boiler-related disasters. The drawing at the top is of a Scotch marine boiler like the one that was in use on the U.S.S. Maine when it exploded and sank in Havana harbor in 1898.

The other photo shows the final resting place of the boiler from the Grover Shoe Factory in Brockton, Massachusetts, which exploded in 1905, leveling the factory building plus a number of surrounding structures and killing 58 people.

There were numerous other interesting photos of boiler disasters, most of them involving locomotives or steamships. For anyone interested in the topic, I suggest a google image search using the search words “boiler explosion”.

5 thoughts on “Bringing it to a Boil”