The issue of an East London mega-mosque is in the news again. It is said the proposed mosque in West Ham will be as large as Battersea Power Station.

As in the past, the redoubtable Alan Craig is leading the charge against the mosque. He sent out the press release below early this morning. 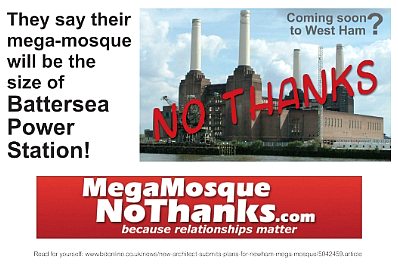 Opposition to proposed mosque “the size of Battersea Power Station”

Local residents and volunteers have launched their campaign against the proposed mega-mosque at West Ham, close to the Olympic Park in east London.

The controversial fundamentalist group Tablighi Jamaat last month lodged with Newham Council their plans for the mosque which, their designer NRAP Architects claimed, will be “the size of Battersea Power Station”. It is planned to have a capacity of 9,350, a dining hall for 2,000 worshippers, residential accommodation for Imams and mosque visitors and a large Islamic library.

The opposition group MegaMosqueNoThanks has taken half-page adverts in the Newham Recorder to inform locals (see image above) and this morning volunteers commence leafleting commuters at West Ham station and homes across local area. They are also working with a team of planners and lawyers to oppose the planning application.

“The sheer size of the mosque betrays the ambition and arrogance of Tablighi Jamaat,” said MegaMosqueNoThanks campaign director Alan Craig who lives with his family a mile from the site. “Their religious ideology is divisive and hostile to non-Muslims, and there is certainly no local demand for something of this magnitude.

19 thoughts on “The West Ham Mega-Mosque”