As was reported yesterday in The Daily Mail, train robbers in Birmingham stole a shipment of anti-tank mines from a freight train:

A shipment of powerful anti-tank mines have been stolen from a goods train.

Thieves are thought to have snatched the mines, used by British troops in Afghanistan, when the train was forced to stop because of a body on the track.

The munitions were discovered missing when the train pulled into a station 90 miles further down the line.

Specialist counter-terrorism officers from the Metropolitan Police, supported by the British Transport Police and the Ministry of Defence, have launched a hunt for the missing mines.

It is understood the heist on Thursday was the work of ‘opportunists’ who broke into one of the stationary wagons unaware of the sensitive cargo, rather than a targeted raid.

But investigators are concerned that the mines, which the British Army use to blow up bridges and buildings in Helmand, could fall into the wrong hands.

The obligatory pre-formulated “no-connection-with-terrorism” mantra was uttered by the British Authorities, much as it is by their American counterparts:

A Scotland Yard spokesman said: ‘At this stage there is nothing to suggest that the theft is terrorist-related. However due to the potential complexity of the investigation and specialist skills of officers, inquiries are being led by counter-terrorism officers.’

Our English correspondent Seneca III disagrees with some of the conclusions published in the Mail article, however. He sends this explanation why there is likely to be more to the train heist than is being published in the media:

This one is interesting for several reasons:

This is a bar Mine:

The Barmine is usually mechanically laid by a plough-type trailer, which can be towed behind an AFV 432 or Warrior. The Barmines are manually placed onto a conveyor belt on the layer, from inside the APC.

The minelayer automatically digs a furrow, lays the mines into it at the correct spacing and closes the ground over them. Up to 600 mines can be laid in one hour, by one vehicle with a three-man crew.

A full width attack mine (FWAM) fuse and an anti-disturbance fuse are available for Barmine; these are secured on the ends of the mine, adjacent to the pressure plate.

And this is a Soviet TM 46 as illustrated in the DM: 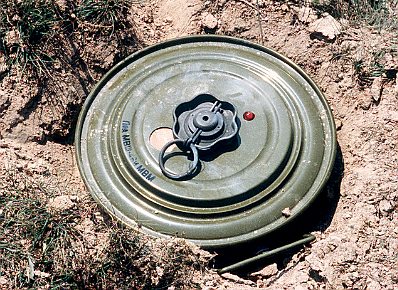 4 thoughts on “That Birmingham Train Heist”