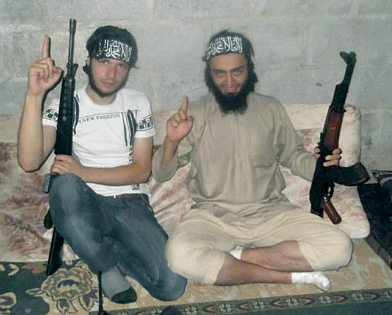 Our Norwegian correspondent The Observer has translated an article from today’s VG about ‘Norwegians’ that are fighting alongside the rebels in Syria.

It turns out that the Islamist organization ‘Profetens Ummah’ (The Prophet’s Ummah), which has caught the attention of the Norwegian media lately, has supplied some Islamic cannon fodder for the Assad regime in Syria.

You’ll remember that members from this group have tried to obtain weapon instruction and weapons licences legally by attending hunting courses in Norway. It is reassuring to know that the Norwegian authorities don’t see any problems with supplying diehard Jihadists like these with weapons.

Mohyeldeen Mohammad, who is mentioned in this article, is a prominent member of the group. He has previously threatened Norway with a new 22/7 or 9/11 on Norwegian soil if we continue to ‘insult’ Islam. The group also staged a rally outside parliament a couple of weeks ago to protest against the ‘Innocence of Muslims’ trailer which was posted on YouTube.

One can only hope that all fanatics in Norway like Mohyeldeen follow in his footsteps and never return to Norway. With luck they’ll find a final resting spot somewhere beneath the stinking hot Syrian desert sand.

(VG Nett) Jan Glent, the head of departments at the Police Security Service (PST), sends a clear warning to groups that participate in holy war in Syria.

Norwegian extremists participate in the war in Syria, and PST is worried that they will return to Norway as ticking time bombs. Last Friday VG could reveal that a Norwegian was killed in combat in Syria. On Monday it was also confirmed that the famous radical Islamist Mohyeldeen Mohammad is among those who have joined the rebels.

“We view the situation in Syria as an internal armed conflict and in such circumstances Norwegian terrorist provisions could be applicable for those taking part in the uprising on the side of the insurgents.” Glent also adds that Norwegian citizens who take part in the conflict on either side could be prosecuted for war crimes

According to information VG has come across, the number of Norwegians traveling to Syria to join the conflict is on the rise.

“I want to warn those who are involved in the fighting in Syria. It is not a straightforward situation and it’s not a given that the rebels have the right to conduct warfare. This is complicated jurisprudence and the combatants have a responsible to look into these matters.

“What happens if they commit acts that violate the terror provisions?

“In those cases Norwegian law allows for criminal prosecution.

“What about funding or facilitating such activities?

“Recruiting, financing and incitement to commit such acts could violate these laws.”

He also stresses that PST has not reached a final conclusion whether the uprising in Syria is legitimate or not.

“We are not saying that the rebels aren’t permitted to carry out legitimate acts of war. But those who travel to Syria take a risk and it is up to the individual participant to be aware of what they are engaging in. This is not a case of walking away scot-free because the jurisprudence is too complicated.

“Other factors also come into play such as which faction one supports or are fighting with.”

Per Gudmundsson is a Swedish journalist at Svenska Dagbladet. Below is an excerpt from his blog entry that has some interesting additional information about the jihadists. The photo of Mohyeldeen posing with a Kalashnikov is from his blog.

Many thanks to The Observer for the additional translation:

Martyr for the Norwegian Prophet’s Ummah

Last Friday the journalist Lars Akerhaug could reveal that a 21-year-old Norwegian citizen fell in combat in the area around the city of Aleppo in Syria. The man, known as Abu Khattir, belonged to the Norwegian group The Prophet’s Ummah, a very outspoken radical group in Norway (no equivalent organization exist here in Sweden, where jihadists keep a much lower media profile). Arfan Bhatti — known from the shooting incident against the synagogue in Oslo — and Mohyeldeen Mohammad are also members of this group. Both have attracted media attention for a number of hard-line statements. The media have recently written about members of the Prophet’s Ummah attempting to receive weapons training and obtain weapon licenses by attending hunting courses

The martyr is hailed as a hero on the Facebook page of the group. There is also a photo of the dead man (the one with the backpack) when he took part in a rally outside the parliament last winter.

According to well informed sources, there are several Norwegian citizens among the fighters in Syria. Akerhaug also mentioned that Abu Khattir’s little brother is taking part in the conflict. On the group’s Facebook page last Thursday one could read that “In the last two weeks two brothers from Oslo have died as shahadas in ch Allah [don’t know what they mean by that — translator], may Allah (pbuh) accept them as martyrs in Syria.”

In the same comment it is implied that there are more combatants “make dua for all our brothers from Norway who fight against Bashar Assad’s regime and for Islam.”

9 thoughts on “Bringing the Fjords to Aleppo”