As reported on Thursday, the German city of Dortmund is in the midst of a refugee emergency, as asylum seekers overwhelm the capacity of shelters and reception centers in the area. A similar crisis is underway in Berlin, as reported in the article below.

Many thanks to Hermes for this translation from Der Tagesspiegel: 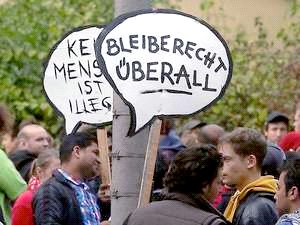 [Photo Caption: “Nobody is an illegal!”, “Right to settle anyywhere!”]

Almost 4000 asylum seekers live in Berlin — and they must share 3600 shelter accommodations. Brandenburg is in no better situation.

More refugees are coming to Berlin and Brandenburg. As the regional office for health and social affairs of Berlin communicated, there will soon be 4000 asylum seekers living in the city. During this year 3000 of them have filed a new application — more than at any time in the last ten years, as many Afghans came after war broke out in their land. The shelters available in Berlin can receive only 3600 individuals, so they are already overcrowded. “We ask religious organizations, districts and welfare associations whether they have free buildings,” said the spokesperson for the regional office, which is leaded by the senator for health Mario Czaja.

Many of the newly arrived come from war-ridden Syria, and there are also gypsies from Serbia, Romania and Macedonia. In their Balkan homelands they lived in shacks with no permanent electricity and heat, being this a major reason why many of them flee to German cities. Welfare workers report that many also come due to the decision of the constitutional court from July of this year which states that refugees can rely on social help.

In recent days there have again been complaints from residents living near Görlitzer Park. Many families there live in their cars and around them. The bulk of them are Romanian gypsies, and they camped with gas kitchens on the walkway. However, being citizens of the EU, these refugees have almost no chances to get political asylum.

There is no lack of out-of-use buildings in Berlin, but not all districts seem to open their doors to refugees. While 1000 men and women were sheltered in Lichtenberg, and more than 500 in Spandau and Tempelhof-Schöneberg, there is a lack of shelters in Steglitz-Zehlendorf and Reinickendorf. Neither district is of small extension nor in a financially bad situation. But welfare experts have at their disposal the engaged secretary of state Michael Büge (CDU party). The senate health administration said that intensive talks are taking place with the districts in order to make adequate accommodations available.

There are similar problems in Brandenburg. Asylum applicants were brought to Eisenhüttenstadt for the initial admission procedures before being distributed to other places. 489 immigrants live now in Eisenhüttenstadt, the spokesperson for the Interior Ministry said. They come from Russia, Syria, Serbia and Afghanistan. It was the first time in years that the shelter reached its limit capacity. In 2007, there were there between 50 and 130 immigrants, in 2008 between 62 and 116, and in 2009 between 95 and 150. The ministry corroborated that the distribution of the immigrants was difficult, because accommodation capacities had been reduced during recent years.

9 thoughts on “Asylum Emergency in Berlin”