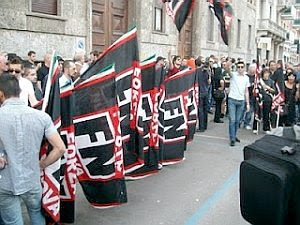 A new nationalist party in Italy has created a hotline for disgruntled citizens to call when they feel they are having problems with cultural enrichment.

Many thanks to our Spanish correspondent Hermes for translating this article from Alerta Digital:

In the Italian city of Ravenna, the Forza Nuova party has made a telephone number available to the public which people may call in order to ask for “militant support against discrimination, violence and injustice to which the Italian people are exposed”.

This was first called the “green number”, but it was immediately renamed the “black number” by the newspaper Il Fatto Quotidiano. Forza Nuova proposes that instead of calling the police, citizens can call this number if they are attacked or threatened by foreigners, so that militants of the party can go to the place to restore order themselves and help Italian citizens in need.

Luca Castellini, the coordinator of Forza Nuova for Northern Italy, denounced the invasion of foreigners, and declared that “Italians are being downgraded on a daily basis when it comes to granting of social housing and job search in the name of a hypocritical and suicidal solidarity. Foreign criminality poses a threat to Italians in their own neighborhoods and threatens their cultural and religious identity”.

The “black number” in Ravenna in not the first of its kind. Similar telephone numbers exist in Genova and Como. The police have not yet made comments about this initiative, which resembles similar ones in Greece on the part of Golden Dawn.

7 thoughts on “Who You Gonna Call?”