Kim Møller, the owner of Uriasposten, posted a report earlier today about a culturally enriched model Danish village on display for Århus Festival Week. The idea of a politically correct village evidently didn’t sit too well with one or more tradition-minded Danes, who took action overnight to rectify the situation.

Many thanks to Michael Laudahn for the translation:

The Danish culture minister’s autonomous protégés unveil a Danish model town centering on a grand mosque, leaving a village church at the periphery

Århus Festuge [Festival Week] 2012 ends today, and among the many arrangements is a little exposition on Bispetorv made by ‘Frontløberne’ [the avant-gardists], culture minister Uffe Elbæk’s autonomous protégés, so to speak. A model town creatively fabricated of cardboard and plastic. I [Kim Møller lives in Copenhagen — far away from Århus] received a tip, and a friend of mine was ready to pay a visit yesterday — quite right, a model town with a grand mosque in the heart of town, and a medieval Danish church at the periphery: 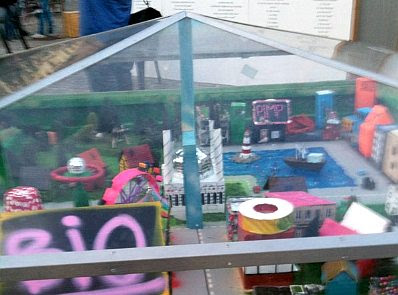 As the quality was not sufficient in the first photo made with a cell phone, I waited for better images, and they arrived around noon. Last night, unknown perpetrators smashed the showcase and knocked over the minarets.

See the original post for six more photos showing various shots of the model village after the glass case had been broken and the minarets knocked down.