A group of latter-day Calibans from sub-Saharan Africa have become castaways on a tiny Spanish island just off the coast of Morocco, in hopes of making their way to the European mainland.

Many thanks to Michael Laudahn for translating this article from El Mundo: 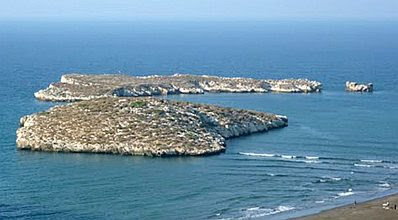 This summer, Spanish sovereignty over the islands and rocks in the north of Africa is turning into a real brain-racker for the government. Their situation very close to the Moroccan coast and the absence of vigilance and safety measures in these territories make a perfect cocktail for the immigrants, whose objective is to enter Spain.

The Isla de Tierra, just 30 metres off the Moroccan beach during high tide, seems to be the target of choice. On Wednesday, 19 arrived in a barge, of which 13 [presently] remain there, because the other six, three babies and three women, were transported to Melilla [see map: arrow is the island; Melilla is to the east, at the margin of this map]. This morning another 68 came, so that the small island in the Archipiélago de Alhucemas, until only four days ago uninhabited, already has a population of 81 sub-Saharans.

According to what El Mundo has learned from police sources, the immigrants arrived at the Isla de Tierra around 5 o’clock this morning. A time very similar to the one when an assault attempt occurred against the Melilla border fence, specifically in the Río de Oro section, the same zone where just two weeks ago two avalanches occurred, assembling some 450 immigrants, of which 60 managed to make their way into the autonomous city.

On this [today’s] occasion, the sub-Saharans were repelled by the Guardia Civil, which in these days of major immigration pressure has deployed a command of the Grupo Rural de Seguridad (GRS) along the border.

In a press communiqué, the Delegación del Gobierno has confirmed these two assaults, which it did not hesitate to qualify as an ‘action perfectly coordinated and orchestrated by the mafias who deal in human trafficking, jeopardising if necessary the lives of minors’.

For the Guardia Civil, the coincidence of the timing of the two assaults is not casual, despite the fact that the Isla de Tierra is rather far from Melilla, some 100 km away. It also needs to be noted that it was precisely last night that the autonomous city started its patron festivities honouring the Virgen de la Victoria. It is quite probable that the immigrants have attempted to use these circumstances, as has likewise happened during other games or sporting events, when groups of immigrants may think that the Guardia Civil and Policía Nacional are less vigilant.

According to information furnished by the Delegación del Gobierno, the 70 immigrants’ arrival at the Isla de Tierra occurred in two cycles. The first one, at 5:10 am, the same time where a ‘group assault’ against the Melilla border fence was registered, and the Guardia Civil and the Moroccan security forces repelled the 60 immigrants participating. Therefore, nobody managed to pass, in contrast to what was happening at the Isla de Tierra, where a second group of sub-Saharans arrived ten minutes later.

All in all, 68 ‘sans-papiers’ have managed to enter into Spain through this rock. At this time, few more details are known, only that there are three minors among them and 17 women. All of them remain on the Isla de Tierra, like also those 13 who arrived on Wednesday, who received health assistance on Friday through the Spanish military, which is stationed on the Peñón de Alhucemas, a few yards away. That day food, water, refreshments and blankets were also brought, as humanitarian aid.

Some hours earlier, on Thursday night, a military helicopter transported a group of six immigrants to Melilla, who had arrived with the immigrants at the Isla de Tierra early on Wednesday. More precisely, they were three babies, between 8 months and 2 years old, and three women, two of them mothers of the children, and one of them in an advanced stage of pregnancy. That same night they were received at the Melilla CETI [Centro de Estancia (= stay) Temporal de Inmigrantes].

The government’s delegate, Abdelmalik El Barkani, said in a press communiqué that the situation with the Isla de Tierra goes is ‘delicate’, since the first 19 sub-Saharans arrived on Wednesday. According to his opinion, the prospect presenting itself now, when this tiny Spanish island is subject to an important immigration pressure, ‘raises the necessity of coordinating an immigration policy that will manage to abort the mafias’ business and involve to a larger extent the European Union’.

This message is in context to the one issued on Thursday, when he warned that the Spanish islands and rocks cannot transform themselves into ‘an airlift’ for immigrants. He also indicated that the government would not give in to the mafias’ ‘blackmail’, to permit new ways for irregular immigration.

According to information provided to Efe [news agency] by police sources, the rescue of the sub-Saharans was complicated, because when the Salvamar Gadir arrived at the spot indicated after the first report, they were not there, so they combed through the area without success, until the hint from a freighter led them to them, in order to take them to the port.

The five immigrants, all of them full-grown, are in a good state of health. That is why they were taken to the Centro de Estancia Temporal de Inmigrantes (CETI), after having been examined at the sports haven by the Red Cross and their identity being registered.

The immigrants tried to reach the [Iberian] peninsula on board a beach raft with oars and life jackets, although they lost their way and were sailing off course until rescued.

One thought on “Marooned on Isla de Tierra”