In the wake of the violent and murderous attacks against American and other Western targets across the Middle East, Paul Weston presents an overview of the abject submission to Islam by Western media and political authorities. 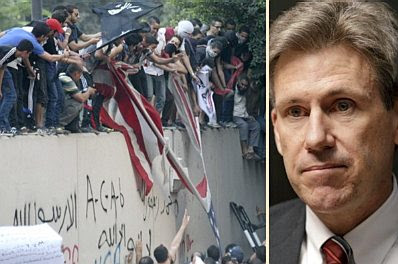 The word “Islam” when translated into English means “submission”. The general idea is that Muslims submit to Allah and all non-Muslims around the world submit to Muslims. The Islamic murder of U.S. Ambassador Christopher Stevens earlier this week provides a frightening looking glass through which the sheer scale of Western submission to Muslim violence and terror can be viewed.

The murder of a U.S. Ambassador is effectively an act of war. It shouldn’t matter that the murderers attempted to dress this up as a natural (in the Muslim world) reaction to some obscure YouTube video negatively portraying Mohammed. The only thing that matters is the cold blooded murder of a human being.

The immediate reaction of the Western political and media class was horrifying. Barack Obama issued a statement which included the following: “While the United States rejects efforts to denigrate the religious beliefs of others, we must all unequivocally oppose the kind of senseless violence that took the lives of these public servants.

Not wishing to be outdone in abject cowardice and evasion, the American Embassy in Cairo went out of its way to excuse the Muslim murderers: “The Embassy of the United States in Cairo condemns the continuing efforts by misguided individuals to hurt the religious feelings of Muslims. … We firmly reject the actions by those who abuse the universal right of free speech to hurt the religious beliefs of others.” [Note: the linked press release has since been pulled – ed.]

Obama and his representatives are essentially siding with the murderers here. The attacks had nothing to do with the denigration of Mohammed. Spontaneous gatherings of protestors tend not to come armed with rocket propelled grenades. To regurgitate the lie of yet more contrived Muslim displeasure is to actively excuse their murderous behaviour.

A well planned series of attacks, carried out on the 11th anniversary of 9/11 against American Embassies in various parts of the middle-east simply did not happen because some unknown Joe posted a video on YouTube. What they really represent is yet another small part of Islam’s ongoing war against the West.

And why does Obama call it “senseless violence?” There is nothing senseless about it in the eyes of the perpetrators. They knew exactly what they were doing, and they also knew that if they provided a wholly contrived pretext for it, the Dhimmis in the West would dutifully parrot their lies.

Have you noticed there is no reference to murder in Obama’s statement? Despite the fact they were clearly murdered (and possibly sodomised and tortured) Obama would rather not acknowledge this stark reality. Their lives were “taken” you see, by some ambiguous people with no apparent motive other than being angry.

This cowardly use of deceptive wording is shocking. Hard-line Islamists carried out the barbaric murders in the name of Islam against non-Muslims. Period. There is no other honest way of describing it.

And why is it an abuse of free speech to criticise, or to tell the truth about Mohammed?

Is it not a fact that he was himself a murderer and a warlord?

Is it not a fact that political Islam and religious Islam cannot be separated in the eyes of Muslims?

Is it therefore not a fact that to refer to the criticism of a political/religious ideology as an “abuse” of free speech is tantamount to elevating political Islam to a height beyond democratic discourse?

The BBC acted in an all too predictable manner, of course. They went to great lengths to emphasize the deep-seated anger felt by Libyan Muslims. Without verifying their facts, they also managed to falsely claim the video producer was an Israeli Jew. When one considers that Muslims had already murdered people, purportedly because of the video, then surely directing the blame toward Israel was done in the full knowledge it would inevitably incite racial hatred toward both Jews and Israel?

Clever old BBC. Divert attention away from Muslim murderers and turn it toward the hated enemy of the supposedly impartial BBC apparatchiks. Perhaps these irresponsible, anti-Semitic, child-like political activists within the BBC should be reminded there is a law against the incitement of racial and religious hatred, although don’t go holding your breath that such a reminder will come from the British police “service.”

Mind you, one mustn’t grumble too much about the BBC. In one of their early broadcasts from Benghazi they actually praised the security detail surrounding Ambassador Stevens, who refrained from “provoking” the murderers by not shooting at them…how wonderfully suicidally altruistic of them that was; and how predictable that such suicidal inclinations merited praise from the BBC.

As it turns out, the guns may have had no ammunition in them and the people holding them were not even U.S. Marines. Despite intelligence suggesting attacks were imminent, it was deemed “politically insensitive” to actually adopt a genuine, defensive attitude. So much better to allow oneself to be murdered than to upset the murderers, it would appear….

In light of recent revelations about British Muslims fighting for the Free Syrian Army against President Assad, it is entirely possible that British Muslims were involved in Benghazi as well. If Britain charged some sort of terrorist export duty on our holidaying native Muslim fundamentalists, we might be able to employ a few more border guards who could ask them where they had been and what they had been up to…

As we watch the Arab Spring descend into an entirely predictable Koranic Winter, it comes as no surprise that those who happily and naively tweeted about future democracy in the Middle East are the self-same people unable to admit to Islamic realism today. These include Obama, Cameron, Sarkozy and William Hague, who have yet to turn off the financial stop-cock flooding the Muslim Brotherhood with dhimmi-dollars.

All in all, not a good week for the West. Muslims can threaten, bomb and murder in the name of Islam, whilst the liberal/left Western rulers and media submit before them. I have this strange vision of Muslims the world over looking at each other in bemused amazement, saying, “Blimey, Abdullah — it can’t really be this easy, can it?”